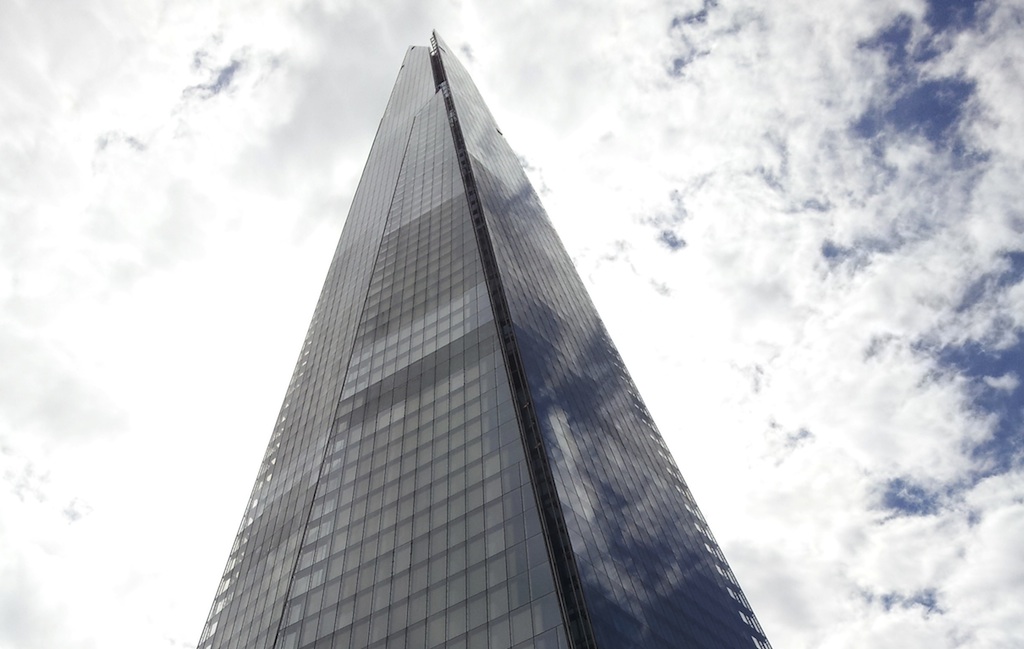 Everyone knows that to be a true Cockney, you have to be born within the sound of Bow bells. But did you know that to be a true south Londoner, you have to be born anywhere that you can step out of your house and see the Shard? Fact! And apparently, since the Shard was completed, the crime rate in South London has halved, there have been fewer divorces, and property prices have leapt by 750.361 per cent. It’s true, I read it – possibly – on the Shard’s marketing website. Millions on PR well spent, I reckon.

If, however, you can see Renzo Piano’s giant plate-glass exclamation mark out of one window, and its shorter uglier sister, the Strata Tower at the Elephant, out of another, you’re on truly hallowed ground. Hallowed because if you do happen to have a double aspect with those views, you must be in a tenth floor penthouse on Bankside that was built about five minutes ago, and the square footage of the room you’re standing in is worth more than the entire public housing budget.

If you do indeed live anywhere on the lone and level sands that stretch between those two vast and trunkless legs of Ozymandias (a reference to Shelley, not Lord of the Rings. Do keep up) then these are interesting times. It seems like every scrap of land in the grimy triangle formed by Waterloo, London Bridge and the Elephant is being, has recently been, or will very soon be regenerated half to death. It’s all too exciting. The hoardings around the building sites are full of movie-poster hyperbole – ‘Breathtaking –Exciting – Coming Soon!’ Quite like the advertising puff for all those romantic comedies starring Jennifer Aniston and some bloke who used to be in Dawson’s Creek – bland, underwhelming and unlikely to stand the test of time.

Obviously, the Shard is unbelievably brilliant and thrilling and anyone who doesn’t like it is a cantankerous killjoy cross-between-a-Luddite-and-a-Philistine (a Luddistine?). But that’s only one new building out of hundreds that have been going up in the regenerated hinterlands of Bankside and beyond that anyone can be bothered to form an opinion about. Apart from the aforementioned Strata Tower, of course, which on completion in 2010 bagged the honour of being named Building Design magazine’s ugliest new British building of the year. If you live round here then you probably have to look at it (hopefully briefly) every day, and you’ll know what they meant when they said it looks like an electric razor with go-faster stripes painted down its sides. And those crappy wind turbines are NEVER turning. So it’s ugly and pointless.

Think about your favourite building south of the river. Tate Modern? The Oxo Tower? Royal Festival Hall? Struggling to think of any more? That weird block of flats with pointy corners by Lambeth North tube station? No, thought not. We’re not spoilt for choice for architectural gems. And out of the semi-serious suggestions I’ve just made, only RFH is still fulfilling the purpose for which it was originally designed. I don’t want to hark back to the good old days of Empire and pea-soupers, but nineteenth and early twentieth-century builders employed a combination of sturdy materials and near-disgusting levels of flair and confidence that have left us modern types with all kinds of juicy leftovers on which to feed our imaginations. A power station that can be turned into an art gallery; a chocolate factory that becomes a theatre [the Menier], not to mention a number of achingly cool loft apartments; even the dreary old railway arches near Southwark Tube now harbour office space for a cutting-edge design consultancy or two. The best of those old piles of bricks are robust and adaptable enough that we can live and work in them at our own present-day pace, and still get a little heritage-buzz, a pleasing little whiff of London’s ever-evolving history and society, without having to shuffle round a museum or a theme park.

I would like to think that our generation will leave something significant enough to help define what kind of place London will be in years to come, but I’m not optimistic. According to some, the Shard may have a projected lifespan of 60 years*. 60 years! All that work, and millions of pounds for what is, in architectural terms, a 1,000+ft fashion statement. Think forward fifty, a hundred years: what buildings of early twenty-first century vintage will our descendants be converting to house their cloning laboratories, their robot factories and their holographic Turkish baths or whatever they use to pass the time? What contribution will we make to London’s extraordinary, fascinating palimpsest of architecture and history that will last longer than a pint of milk? Bow Church has been there for seven centuries – that’s twenty-odd generations of bona fide Cockneys. Will people still be paying to go up the Shard in the year 2813?