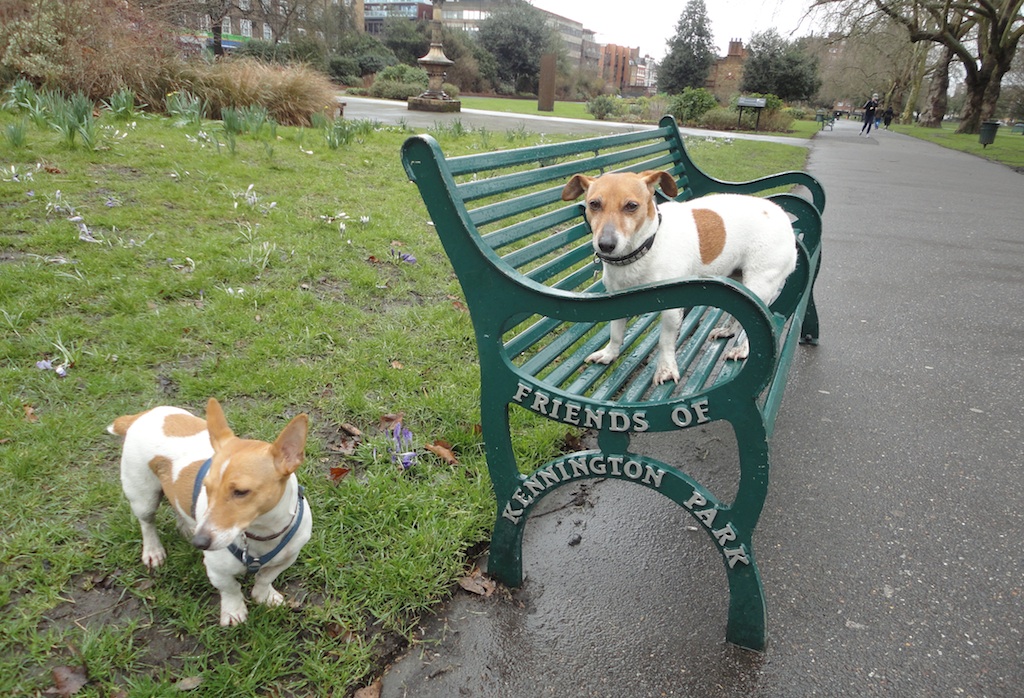 Readers of our sister site, Kentishtowner, may already be familiar with Pepper, the mascot Jack Russell belonging to founding editor Stephen who has had her fair share of scrapes, poor thing.

But she’s doing just fine now, and like Below the River, she’s no stranger to the “magic train”, so called because it gets you from downtown NW5 to Loughborough Junction in just 17 minutes. Why? Because it’s where her best pal Reggie, Below the River’s resident Jack Russell, resides. Which is how she found herself down here last weekend, when Stephen and his other half hopped off for a romantic anniversary break in Venice.

And what else could we do but give the pampered north London pooch a proper local tour of some of our favourite dog-friendly places?

To fuel the pair’s looming adventures, our first stop was for a quick tea (70p a cup) and a bacon sarnie (£1.90) at a favourite spot in Brixton Market: Express Café, a proper old-school caff – fast becoming incongruous among the daily openings of new restaurants round these parts. Although the café doesn’t allow dogs indoors, they have seats in the covered market outside; perfect people watching for the pups.

However, despite the hearty breakfasts the dogs had had before we left, Pepper and Reggie were more interested in watching something other than people, as you can see above (that’s Pepper in the foreground). Neither of them was impressed that the bacon they could smell was not for them.

(But yes… of course they got a little bit.)

Fronting up to the drizzle outside, we set off along Brixton Road to Oval Farmers’ Market (below), which takes place in a churchyard just opposite the station every Saturday.

Although it’s a pretty small event, it has a bit of everything you’d want from a foodie potter – Portuguese custard tarts studded with blueberries, organic fruit and vegetables, cups of hot apple juice and steaming vats of hearty stew.

Since the bacon sandwich earlier was my boyfriend’s, I was hungry. From the Honest Carrot stall, for £3, I chose a London Roast; a slightly odd spiced beetroot and vegetable ball, padded with cornflakes, so as to be gluten-free apparently (I hadn’t read the label before biting into it). Rather crumbly, it wasn’t easy to eat while being dragged about by two busy Jack Russells.

Pepper and Reggie, meanwhile, managed to procure themselves some organic sausages from the generous stallholder at the Giggly Pig. What tarts.

Just opposite the market is Kennington Park (see top image), where we went for a scamper to work off the bangers. But the rain was coming down so hard that we ducked into the park’s very dog-friendly tea rooms, housed in a beautiful Arts and Crafts exterior. More tea, some chocolate chip shortbread – and a fire Pepper enjoyed drying out in front of…

…but not for long (see left). That park was muddy.

On Sunday, though, it was time to get dirty and wet all over again. Driving rain, alas, is no barrier to dogs needing a walk. We went to one of my locals, the Green Flag Award-winning Ruskin Park, midway between Herne Hill and Loughborough Junction. The beautiful Edwardian gardens, with its avenues of ancient trees, is a great dog-walking spot. Because the park is divided into two halves – one ornate, planted and dog-free, the other grassy, open and doggie – the part we always go into is quite compact and usually very sociable; there’s nearly always a gang of friendly hounds galloping over to say hello. The park has a little take-away cafe too, as well as a children’s playground. Better than that, it is near to a pub that does a very good roast dinner.

The Cambria’s transformation from old boozer to swirly wallpaper and chandeliers bonanza still tugs on my nostalgic heartstrings, but the pub does seem to be at the heart of the residential, young familied community in the streets around it. Plus the staff are really friendly, there’s a decent garden in the summer and regular drag queen cabarets in the upstairs room. Some friends and I once had a four-person bar disco in there on a quiet night with the bar staff DJing for us.

It also loves its four-legged punters; Reggie once even got a surprise box of leftover meat cuts along with his bowl of water. But not everyone goes for the meat: I love their vegetarian Sunday roasts (£10.50, including gravy, home-made Yorkshire puddings, well-crisped roast potatoes, seasonal vegetables and red cabbage). It says “nut roast” on the menu, but if you are in the know (or, like me, don’t like nut roasts), ask for the sausages. Perhaps surprisingly, they come from Smithfield meat market – but that’s probably why they taste so good, despite having not a bit of meat in them. (And vegetarians not put off by that should know that the Prince Regent, another canine-welcoming pub up the road in Herne Hill, uses the same supplier. I’ve often felt the need, in both pubs, to ask the staff if they’re sure they have brought over the vegetarian sausages.) My dining buddy had the pork (£12.50). Reggie and Pepper each got some of my sausages and were none the wiser. And after all that activity, no wonder the terrible two were so tired…

Want to see Pepper at Kentish Town tube as she arrived for her trip? Click here.