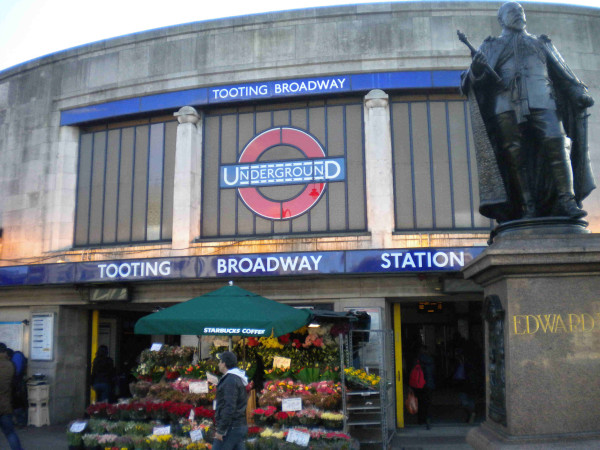 Tooting is off the track (or the wrong end of the Northern Line) for central south Londoners, but if you like your swimming outdoors, your dinner well spiced and abundant open spaces – try a daytrip. We ask local, Ellen, for her pick of things to do and see…

Tooting Bec or Tooting Broadway?
Tooting Bec is often referred to as “the nice end”, while the Broadway, one tube stop down, is a little scruffier to look at, but there’s something bubbling beneath the surface, between the pound shops and high street stalwarts. Its excellent curries far surpass those on Brick Lane, too.

Best for breakfasts?
Graveney and Meadow (run by the people behind The Antelope next door) has an industrial, low-lit vibe and serves breakfast all day. Tota (pictured) has a similar feel and both places do excellent coffee, cakes and fancier fare in the evenings (tapas at the former, steaks and modern French/British at the latter).

Happy shopper
Tooting Market has a more boho vibe than its neighbour, Broadway Market, and sometimes hosts gigs put on by the Arts Club. Along the high street there are plenty of charity shops, if bargain rummaging is your thing, and there are also lots of lovely single-focus shops serving the local Asian community: jewellery, sarees, beauty, and – of course – food.

South Londoners who lunch
Try the Selkirk – especially in the summer; it has a brilliant beer garden. If more than one of your party is having a roast, the meat and trimmings are served communal-style on a board for you to serve yourself, a nice touch. You could also try the recently revamped Gorringe Park or The Antelope (mentioned earlier).

Let’s go outside
Tooting Bec common is a short walk from Tooting Bec station – take a dip in the Lido there if you’re brave enough (brr!). Either way, pick up an excellent coffee at Nazish’s Kitchen on your way, and try out the Lost in Tooting app, a treasure hunt/art project to “catalogue the changing relationship between the Common and its users”.

Dining room
If you swerved your spices at lunchtime, you must have a Saturday night curry here. On the high street, try Spice Village for its particularly spicy onion bhajis or, for something more innovative, Maseladar, pictured left [Kastoori on Upper Tooting Road, is a Below the River favourite]. But if you’re not going for the local speciality, try the brand new Joint Diner which serves, modishly, just two dishes: sourdough pizza or posh burgers.

You dancing?
Check out what’s going on at Tooting Tram and Social, the huge self-proclaimed über pub, often with bands and DJs.

This is box title
Before you leave, make sure you’ve taken in all the sights on your travels: the rather attractive old gas lamp/signpost in the centre of Mitcham Road by the tube station, the art deco Granada (the first cinema to be given Grade I listing, now a bingo hall) and – last but not least – the first ever Chicken Cottage. Really.

Read the longer version of this feature, which was first published on the Kentishtowner