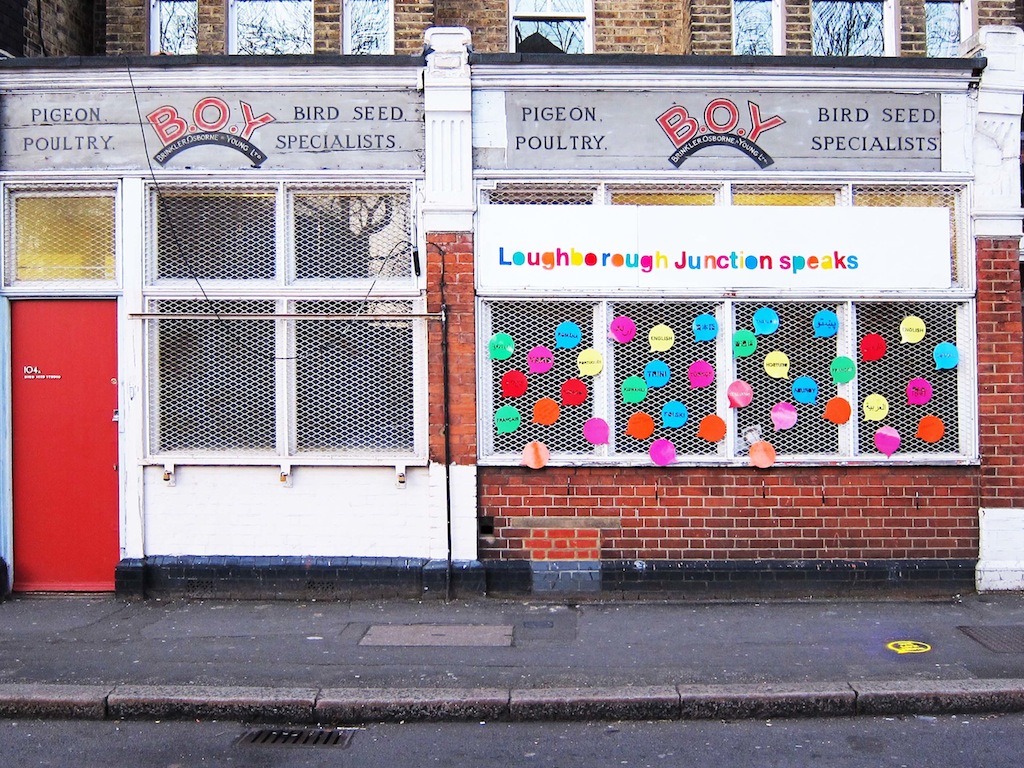 Loughborough Junction locals might recognise the image above. Perhaps you strode over the recent explosion of multi-coloured pavement graffiti, spelling out “We live here” in various languages (see one in situ, right) and felt an unexpected swell of pride about your locale – we did, and liked it so much we took this snap.

And as graffiti goes, it’s rather lovely, don’t you think? Aesthetically pleasing, it also washes off after enough rainfall (it’s only chalk paint) and, most lovely of all, its multi-lingual message is extremely friendly.

Which was entirely the intention by its perpetrators who, we discovered after some digging, to be The House in the Junction on Shakespeare Road. This “anonymous space in the heart of Loughborough Junction” is the HQ for an intriguing community project that aims to boost spirits in the area. Or, as the official line puts it, to: “Bring more of a sense of localness and identity to Loughborough Junction, by creating memorable, colourful and playful moments, and making the area more about its people than its reputation.”

We Live Here is just one of dozens of these “colourful, playful moments” that have come out of the House. Perhaps you’ve also spotted bright balloons dotted around the area… or passed “love” letter-boxes (below) attached to lamp posts… or stumbled across a mural made of sweets you were invited to eat? All the same project – more of which shortly – but why are they doing it?

“Loughborough Junction suffers geographically,” explain Margherita Poggiali and Lizon Tijus from The House when we meet there for a cup of tea. “There is a lot of disconnection here: up the road in one direction, you have Brixton, which is very dynamic, as is Camberwell in the other direction. Then you have Herne Hill, which has decided to go very yummy mummy. But here there is less of that sense of neighbourhood – and yet people feel very passionate about living here. So the project is about trying to connect people more.”

The pair, who have worked together on other community projects and describe themselves as “interaction designers” say the initiative – which is entirely self-funded, on a shoestring – is a playful alternative to “sitting people around a table and saying, ‘right then: let’s discuss the area’.”

But, Poggiali and Tijus emphatically explain, the balloons and sweets et al are all collaborative community events: they come from local people, not from the team at the House. They see themselves merely as facilitators.

The graffiti, for example, came about after a conversation with “a French girl who lives down the road,” explains Poggiali. “She wondered how many languages were spoken in Loughborough Junction. So we went around asking people what languages they spoke, and then asked everyone to translate ‘we live here’ into their language, writing it out so we could copy it correctly and turn it into the stencils. The idea wasn’t about exploring ethnicity or race, it was about language; how we communicate with each other.” Poggiali and Tijus trawled the streets locally, collecting 30 different languages and – literally – spread them across Loughborough Junction’s streets. “We got stopped by the police,” admits Tijus, “but when we explained what we were doing – and that it wasn’t permanent paint – they were actually really interested.”

It’s nice in a way that things in Loughborough Junction are secret – unlike in Brixton which is out there, showing off

“Everything in Loughborough Junction is hidden,” she continues. “You have to be really curious to discover what’s here – beautiful back gardens, the pub, the cinema, lots of artists working here. It’s nice in a way that these things are secret – unlike in Brixton which is out there, showing off – but at the same time you don’t get people coming together when these things are hidden.”

The pair use the phrase “urban intervention” to describe such events. It is, says Poggiali, digging out a heavy academic-looking book of the same name, “a technical term”. Banksy, for example, she explains, “is an urban interventionist – because he does much more than tagging; it can be any form of active change within the built environments people use.” Peckham’s famous Peace Wall – the spontaneous montage of positive Post-it notes that appeared following 2011’s riots – is another example, the pair explain. And the Loughborough Junction interventions are much more along the lines of the Peckham Post-its – an organic collaboration, rather than something directed by one person or a fixed team.

As such, the balloons – which appeared outside the House earlier this year, along with notes saying, “Take me somewhere in Loughborough Junction” were sparked by one local’s wish to “colour the area”. There was also the snow-painting incident – perhaps you were flummoxed at the time by the sight of technicolour snowmen in Ruskin Park. This came about when two local artists said they’d like to use Loughborough Junction as a blank canvas. The mystery post-boxes that appeared in time for Valentine’s day, inviting passers-by to deposit love notes into them, were initiated by the “incurable romantic” who simply wanted to spread love.

So how have locals responded? “Well, it’s great: people have now started approaching us to ask what’s happening for the next one.” (To which the pair always reply, “What would you like to happen?”) Others, however, have been thrown somewhat, unsure how to react. Poggiali and Tijus describe how they came out of the house to find some local school-kids scribbling on the blackboard wall, part of another intervention. “They looked like they’d been caught in the middle of doing something bad,” says Poggiali, “until we explained that that was what it was there for. Then they really loved it.” There’s another boy who always tags their interventions with graffiti – using his tag, ‘Dread’. “Now we’ve started adding his tag before he can do it – which really confuses him. He’s our most successful intervention!” They also get other puzzled responses: “We had a lot of people asking “how much?” about the balloons. They couldn’t understand why we were giving them away for free. We just said: ‘why not?’ In one way, yes, it was a generous gesture, but the whole idea is about being generous to your area, generous to each other.”

Poggiali continues: “When you walk past a wall of balloons, and you realise you can just take one, you feel a bit better in your day. If you have five, 10 or 15 of these types of things happening, it starts to make a real difference to how you feel and interact with your area.”

Another intervention was the Wishing Wall – where passers-by were invited to write notes outlining their wishes for the area on colourful tags attached to a wall. Among pleas for improved local services and yoga teachers, one of the notes, says Poggiali, had a phone number on it “for the blond girl on the 8.37 train”. They’d love to know if the train couple got it together…

Words: Kate Burt. Images: Dee Ramadan and The House in the Junction

This is box title
We’ll post up details of an ongoing intervention that the House is promoting on tomorrow’s pinboard. Meanwhile, if you’d like to instigate your own urban intervention, just drop a line to thehouseinthejunction@gmail.com