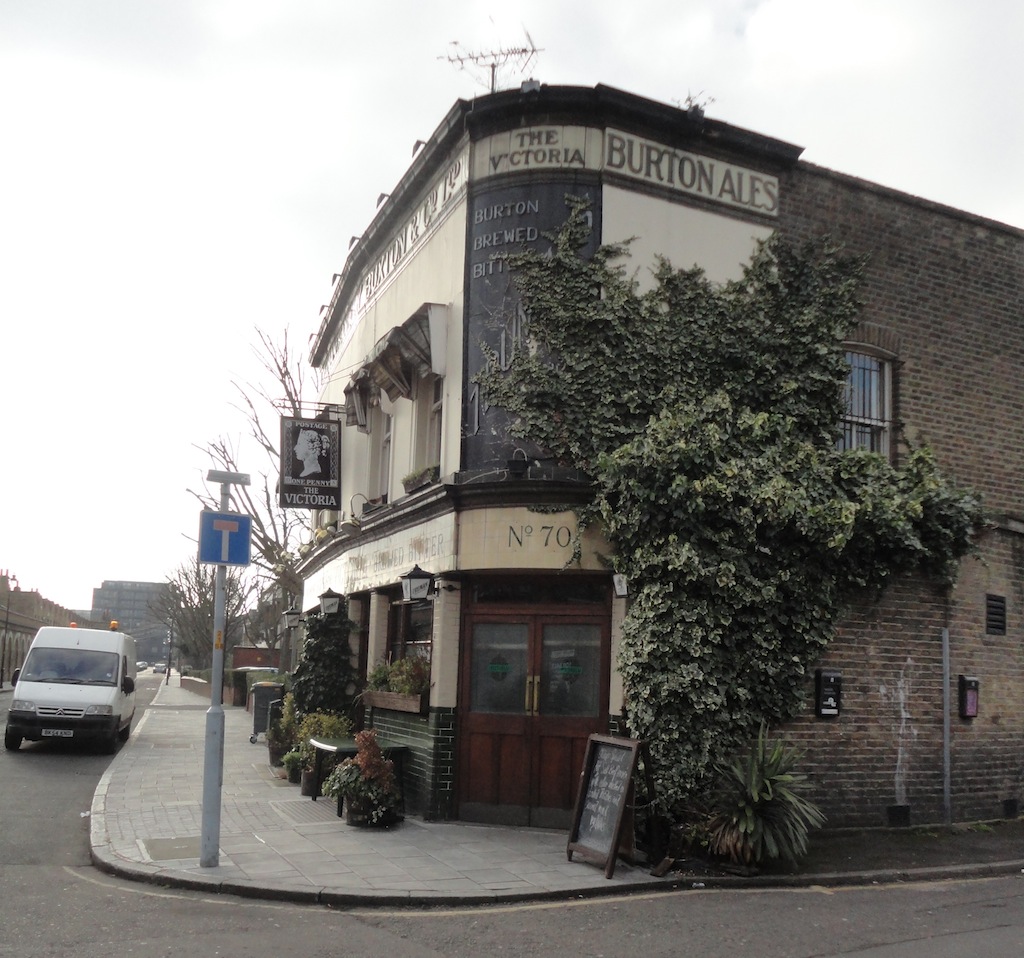 Any pub with a sign above the bar saying: “No bloody swearing”, and another reading “Hands off the barmaid”, is a pub that’s got to make you feel warm inside.

There’s even a classic, cardboard Planters’ peanut display, the sort that gradually reveals a scantily clad model as packets of nuts disappear. Nostalgia tramples on my feminist instincts as I look around at the welcoming wood-panelling, studded green leather banquette seating, homely brass light fittings and the fireplace.

The pub is tucked among quiet residential streets – but just a hop from the New Kent Road (if you know where to look). Luckily, I’d had a tip-off, by a friend who works nearby and has been petitioning me to go for months, sending tantalising photos of the place and extolling its old-school credentials.

So we go one weekday for lunch. The Victoria in Bermondsey is a proper corner boozer and from the outside, it’s an incredibly pretty pub, covered in climbing plants and bottle green and cream Victorian tiling. It still has the original saloon and public bar doors – one has “Albert” etched into the glass.

It has been run by the same family for 27 years, and the current landlord, Pat McKenna turns out to be a friendly host – introducing us to regulars and regaling us with stories of how much the area has changed. Before the smoking ban, the pub used to get rammed, too, he says, so busy they had to have two sittings for lunch and half a dozen staff. The Victoria has lost two thirds of its business since those heady days, he says. But the place slowly fills up during the two hours we spend there; not bad for a Tuesday lunchtime.

The menu is as trad as they come – dominated by ploughman’s, grills and omelettes. Gloriously, sandwiches start at just £2 – and filled things that have become extinct on most London menus, such as hot sausage and onion and corned beef and pickle – or you could blow the budget with the Scotch rump steak sarnie, at £4.90.

As we wait for our food, the unobtrusive TV on in the corner of the other bar suddenly becomes transfixing when we notice it’s showing the 1970s Sid James sitcom, Bless This House. And as lunch arrives, a definite theme is emerging.

Between us we have a cheese salad baguette and “hand-cut” chips, a tuna salad and cod, chips and peas. “The sandwich has come up a bit small I’m afraid,” deadpans our landlord as he puts mine on the table. It is a vast mountain of French bread, so stuffed with filling that it doesn’t shut properly. I look at him and he breaks into a big smile.

Salads are iceberg lettuce, cucumber, tomato and onion – not a rocket leaf or heritage tomato in sight. And it’s just possible that the chips weren’t hand-cut in on site. But this is no gastropub, and so it’s not the place to go if you’re after clever foodie twists and organic ingredients from nearby Borough Market. But it is everything we wanted our pub lunch to be. “Great,” says my friend of his cod platter. “Well, when I say ‘great’, I mean I’m enjoying eating it a lot. I started going to pubs in the 70s and that’s just what my lunch reminds me of.”

The place, of course, predates that era by nearly a century: it was built in the 1880s as a railway man’s pub – and originally included living quarters where one half of the bar now is, as well as a “bottle and jug” area in the middle, where customers could bring a jug from home for takeaway beer. The Victoria is rightly proud of its roots – but isn’t afraid to welcome newcomers, with modern temptations. As we leave, Pat calls from behind the bar: “Come back on a Friday – we’re open till 1am and there’s a DJ!” We might just do that.