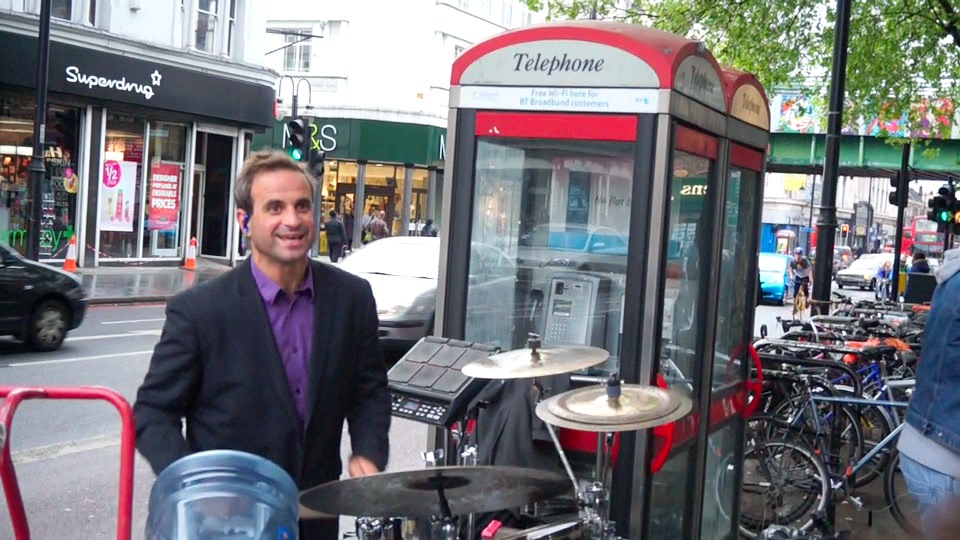 It’s not a surprise to come out of Brixton tube station and find a mini musical event going on on the street. SW9’s pavements and street corners are a popular spot for spontaneous gigs – whether it’s one of the Saturday morning gospel choirs, the singing and dancing Japanese family ensemble in matching outfits, or Christian youth rappers (though, alas, no more lady playing the comb). But it’s less often you catch a performance so amazing you stop to watch the whole thing, then find yourself cheering at the end.

So it was at the start of the holiday weekend, coming out of the tube on Friday evening after work. At first glance, few commuters blinked to see this guy: what appeared to be another random doing something, well, random: this appeared to be a guy who’d just got out of his 9-5 insurance job in the City, loosened his tie, and hijacked someone else’s beatboxing pop-up by jumping behind an assembled drum kit…

… in fact, it was all less random that it appeared. The man with the sticks – which he was wielding with a big grin, as he bounced around adding lamp-posts and the nearby telephone box to his set – was, in fact, playing his own drum kit. Because he is Tel Aviv-born Oded Kafri, an accomplished drummer whose Project DruMachine has been popping up at spontaneous gigs all over London – whether for streetside surprises, like the one in Brixton, or gigs such as the ones he’s played in venues including Camden’s Koko and the Bedroom Bar in Shoreditch. He even made ITN news when he popped up for a pavement gig in King’s Cross in April.

We thought he was brilliant. So if you missed the Brixton performance, enjoy the video. It certaintly cheered up our end-of-the-week marvellously.