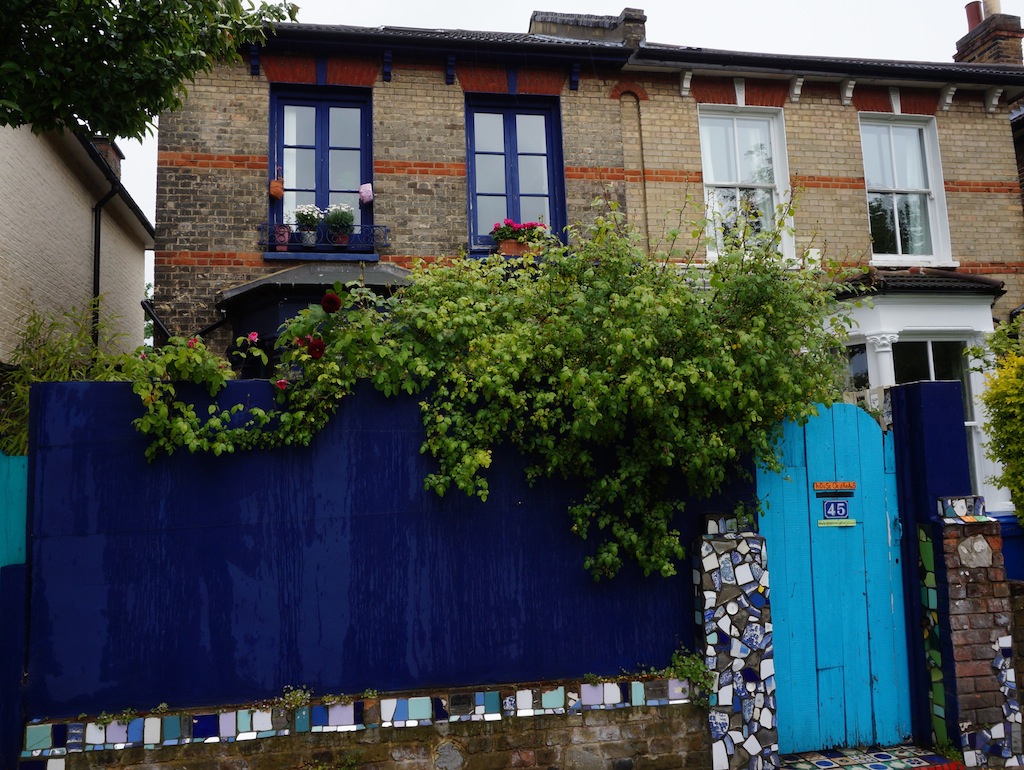 Wednesday Picture: Inside the House of Dreams,
East Dulwich

Maybe you’ve passed 45 Melbourne Grove in East Dulwich, with its Yves Klein blue fence and tall, turquoise gate and wondered what it’s like inside. It stands out, as it’s a little brighter than its neighbours, but otherwise there’s little to indicate the visual mayhem that lies inside.

First you need to get through that front garden (pictured, right), filled with fluoro-painted shop dummies, disembodied dolls heads and colourful mosaics. After a (perhaps redundant) sign at the front door, warning visitors that the owner doesn’t embrace minimalism, brace yourself for the rest.

The hallway is a collage of giant diary entries – often harrowing – painted onto boards in chaotic handwriting. Beyond, textures, colours and shapes tussle for attention. There are pinks, blues, greens, yellows and reds; glitter-covered surfaces sprouting with curly nylon-y wigs; record sleeves stuck to the ceilings; toys, spectacles, masks, buttons and bits of packaging bulging from every surface.

Welcome to the home of the artist, Stephen Wright. He has lived here for 31 years. It is also his museum – which he calls The House of Dreams. And one day a month, he opens it up to the public.

“Sometimes,” says Wright a small, smiley man with pale blue-grey eyes, a neat white beard and a tidy posture to match, “I do wonder what the fuck I’m doing. If I wanted an easy life, I wouldn’t be doing this.”

The House of Dreams began life fifteen years ago “just as something decorative”. Wright was already a successful textile designer who fell into fashion design in the 1980s “simply as a vehicle for using my hand-painted fabrics,” he explains. Nevertheless, he collected commissions from celebrities including Shirley Bassey, Judi Dench and Vanessa Redgrave. After a subsequent stint as a knitwear designer, and another as a stylist for Elle Decoration, Wright launched a stationery line, sold in the cream of London’s design stores – including Conran, Designer’s Guild, Liberty. But he sold up after 12 years when the company “got too big”.

Melbourne Grove was something he embarked upon with his late partner, Donald Jones. The first completed section was a large but isolated mosaic on the patio (right), which Wright and Jones worked on together. Enthused by the process, Wright extended his mosaic-ing, cementing odder and madder objects into the walls. “House of Dreams?” says Jones jovially in video footage Wright shares, shot back in the late 1990s, “I call it the House of Screams.”

But a few years later everything changed. Jones became ill with a rare skin condition and was eventually admitted to hospital where, after six months in intensive care, he died. Not long after, Wright also lost his beloved parents. There was a year or so when Wright felt unable to work at all and then, as he puts it, the house evolved into “a response to loss”.

Among some of Wright’s more unsettling domestic artworks is a hairy ape-like life-size figurine, wearing his father’s false teeth. And in the hall he’s copied out the feelings he wrote down “half an hour after Donald died”.

“The work isn’t just decorative any more, now it has an edge,” he says. “All of the angst is in a box in my head – I open it and use it when I need to and then close it again for a while when I’m done.”

Wright worked on the house in secret for years before opening it up to the public a couple of years ago. Now that others are aware of the house as a museum, he says, they have started to bring their own things for him to incorporate into its walls. “One lady brought her late mother’s glasses collection,” he says. “They are now set into the wall with her name.”

As well as donations, Wright is a keen flea market scavenger – though despairs that gentrification is ruining his favourite haunts. “They’re even gentrifying Deptford!” he wails. Though he still managed to find his latest doll at the market there – from a stallholder who let him have it for a pound, having just accidentally run over her face. “Nearly all the dolls here have some sort of disability,” he says brightly. “But with me, they’re back to Mama.”

The collection is also, he says, about wanting to leave something behind for others. Though not everyone, of course, will appreciate it. Like the schoolgirl on a recent visit to the house with her class: “You’ve ruined your house, you have,” she told Wright. “Maybe she was right,” he says, “but who cares if I have? I do what I want. I’m not trying to sell it, am I?” (In fact, he’ll never need to – as the National Trust has agreed to take on and preserve the house when Wright is no longer around.) “I need to be true to myself,” he concludes. “And luckily people seem to want to come on the journey – I make a living out of it, after all.”

He is available for private commission. Email him at steveparis50@yahoo.co.uk or call on 020 8299 3164. Stephen also has a beautifully photographed new book out all about the House of Dreams. You can buy it from his website or at Brixi, Unit 7, Brixton Village, SW9.

The house is at 45 Melbourne Grove, East Dulwich, SE22. The next open day is on Saturday 8 June, between 11am and 4pm. Entry for adults is £10, students get in for a fiver and children go free. Find out more about Stephen Wright at his website.

And if you’d like to have a nose around the very surprising upstairs of Stephen’s house, you can see some images over at Your Home is Lovely.

1 thought on “Wednesday Picture: Inside the House of Dreams, <br>East Dulwich”