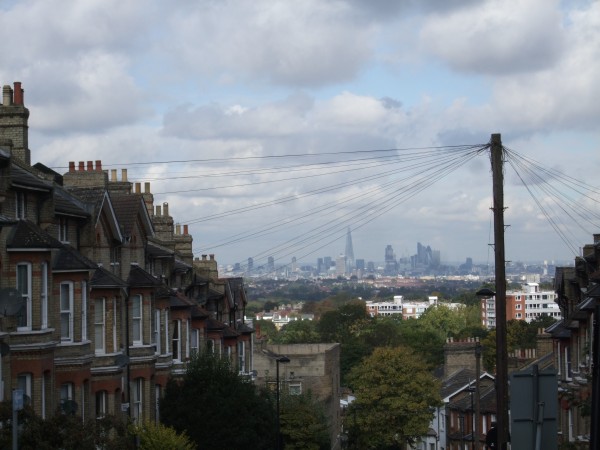 In the sixteen years of running our Crystal Palace bookshop, Bookseller Crow on the Hill, just one thing stubbornly remains the same. Despite fantastic buses (the 24-hour number 3 takes you through Brixton and up to Trafalgar Square – and other routes will get you direct to Elephant and Castle, Blackheath, Peckham) and rail connections (we’re under 20 minutes from London Bridge and Victoria), not least the recent addition of the ingenious and effortless Overground (which takes in west Croydon, Clapham Junction, Hackney and Highbury & Islington, with  Jubilee Line and DLR connections), the misconception that Crystal Palace is difficult to get to prevents so many of our fellow Londoners from enjoying this generous, busy place.

Over the years Upper Norwood – which is what officialdom and older people tend to call the area – has suffered being in the crossfire of the five different London boroughs: Bromley, Croydon, Lewisham, Lambeth and Southwark converge here.

But this proud suburb has learned to stick up for itself, its feisty sense of identity raising a middle-finger to those who feel the lofty (literally, as you can see from the view above) neighbourhood is beneath them. But if you still need a reason to top up the Oyster card and visit, here’s five of them.

This is box title
The restaurants We have many. But our favourites include the established Franco-American elegance and reassurance of the famous Joanna’s (56 Westow Hill, 020 8670 4052), the Sardinian gastronomic adventures at Mediterranea (21 Westow Street, 020 8771 7327), and the hippest vibe in town can be found at Domalis (38 Westow Street, 020-8768 0096) a stalwart of the community providing an inexpensive pescatarian menu, with attitude. And a garden.
This is box title
The boozers The old cliché – something for everyone really applies here. Grandeur, music, grub? Westow House (79 Crystal Palace, 020 8670 0654) . CAMRA Pub of the year? The best beers are served at the Grape & Grain (2 Anerley Hill, 020 8778 4109). If you want a decent dinner cooked by the boss, the Sparrowhawk  (2 Westow Hill, 0208 761 4831). If you want to be in Greenwich Village but can’t afford the air fare, head to the Alma (95 Church Road, 0208 768 1885) is where the coolest locals hang out, especially for the top notch food they serve there (ahem, that’ll be us then).
This is box title
The views A favourite pub game is to name all our hills, then climb them. No really. From up here, we get astonishingly detailed views of the city below (and the swathe of brown pollution it is wrapped in). It’s not for nothing that Norwood is known as the “fresh air suburb”. Unsuspecting visitors are also amazed at the idiosyncratic buildings that line our streets and lanes, a legacy of the palace and subsequent Victorian investment. And the exquisite architectural sweep of Gipsy Hill is as beautiful as any in Hampstead.
This is box title

The park Wow. With massive palace foundations and statues, dinosaurs, lakes, a farm, ancient woodland, dramatic lawns, museum, intriguing maze, a fifty-metre pool and listed diving board, a fully functioning campsite, vintage car rallies, concerts, athletics, more stupendous views, all accessible by the stunning refurbished station, in which you’ll find Green & Brown, one of the best cafes on the rail network(@browngreencafe) it is a wonder the park isn’t royal yet. What else will it take?
This is box title

The cycling If you can’t be arsed to get on one of the many buses or trains serving the neighbourhood, get on your bike as hundreds do every weekend because Crystal Palace is THE meeting point for numerous clubs and enthusiasts, boasting several really good cycle shops that cater for all levels, from the leg shaving, lactate tested expert at Cadence (2a Anerley Hill, 0208 676 8825) to the family orientated pedaller, like Blue Door Bicycles (5 and 7 Central Hill, 020 8670 9767), which also has a cafe called Yard 5, pictured left.
This is box title
The shopping Ah, that’s six reasons, sorry. Manish at Good Taste Food (28 Westow Hill, 020 8761 7455) carries the flag for foodies, with his cheese and wine and integrity. The little Italian deli Cappuccios (53 Westow Hill) bustles on unpretentiously as does the independent Blackbird Bakery (71 Westow Street). Antiques and vintage style has always been part of landscape with the grungily eclectic Bambinos (32 Church Road, 020 8653 9250) and the Haynes Lane Market (Haynes Lane, 07931 096619) emporium giving true meaning to the word pottering, while numerous other traders turn cast-offs into trendiness. For plants, the Secret Garden (70 Westow Street, 020 8771 8200) is really a secret oasis. For gifts, Smash, Bang, Wallop (40 Westow Street, 020 8771 5517, see left) and Glitter & Twisted (25 Westow Hill, Y 020 8771 9493) do their best to tempt and for pukka toys, Papagaio (@papagaioworld) has just cracked open the box.

We call our shopping quarter “the triangle” and with traditional retailers hanging on in there too, you can still get a haircut and buy a length of bandage, goldfish or bag of nails (and soon a chop and a filet as a butcher and fishmonger are about to return after fifteen years exile blamed on the supermarkets). And books. Lots of books. Seven days a week we sell literary American imports, books for kids and cooks and crime addicts and local historians and miles of other new stuff. We run a reading group, writing workshops and have weekly events with authors as diverse as Jonathan Meades, Matt Haig and the LA Times Fiction prize-winning, Ben Fountain. Recently described as “shabby but wonderful,” the Bookseller Crow is up on the hill for one reason – it really is the only place to be.

Want to read a north Londoner’s take on Crystal Palace? Check out the piece our sister site, Kentishtowner, recently ran after an excursion down south.