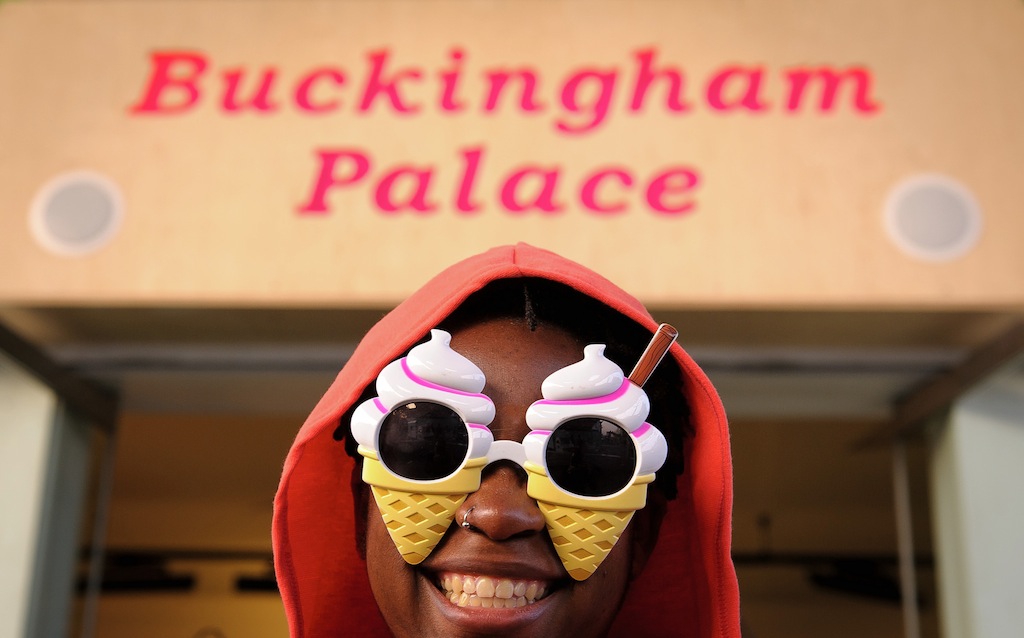 We mentioned the unusual new exhibition at Peckham Space last week, now the gallery’s director tells us how she commissioned a bunch of teenage girls to put on a show

Stepping from the hustle of Peckham High Street into the gallery that is Peckham Space, the last thing you expect is to be invited to play. But this is exactly what Sarah Cole has in mind with her current exhibition TRIBE. It might be the lure of a child’s music box that echoes across Peckham Square and pulls you in, or the illuminated flouro pink sign that reads “Buckingham Palace”, the origin of which later becomes apparent. When entering the gallery the sweet smell of fresh grass under foot immediately transports you into a very different space. And this space is the collective imagination of the artist with Amunet, Anukis, Ismat, Jayne-Louise, Lindsay, Louise, Kirsty, Molly, Nadia, Petula and Ruby – and they want you to play.

I commissioned artist Sarah Cole to work with Southwark’s Creative Arts & Music Young Women’s Group for girls aged 11 to 18, to produce a new artwork for Peckham Space’s exhibition programme which would address notions of safety and camaraderie. Everything now in the gallery results from the conversations and teenage imagination of the girls who took part, some of whom are pictured below.

So let me take you on a virtual tour: imagine you have an ice-cream in your hand, one from the van outside the gallery, maybe it’s a 99 with a flake. You sit down on one of the camouflage bean bags to watch a video. The familiarity of the TV and the relaxed seating remind you of someone’s living room, but then you realise that the image in front of you is a sparrow hawk killing a pigeon. It is a provocation taking you out of your comfort zone and you turn to see some brightly coloured onsies suspended from the ceiling. You decide to try one on and play the drum kit which is located in the window of the gallery. Nobody stops you doing this.

After you have played on the drums, you turn to the wall near by where there are several music boxes, the kind that are sold by the sea side with the name of the song on the front. On closer inspection you notice there is a piece of card running through it with a word on it and holes punched through it. You notice this is also on the front of the building, and you find out that this is part  of the secret language used by TRIBE. Your curiosity is ignited and you want to find out more, so come down and play.

This is box title
TRIBE by Sarah Cole with Amunet, Anukis, Ismat, Jayne-Louise, Lindsay, Louise, Kirsty, Molly, Nadia, Petula and Ruby runs until 21 July 2013. The gallery is open Tue-Fri, 12 noon-6pm and on Saturdays and Sundays between 12 noon-5pm. Peckham Space will also be open for South London Art Map’s Last Fridays this week, Friday 28 June from 6-8.30pm.