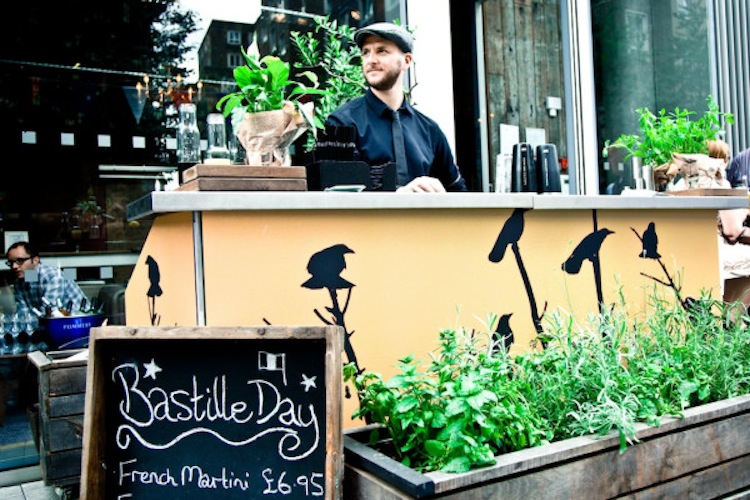 With more French people living in here than in Bordeaux, Nantes and Strasbourg, London is technically France’s sixth biggest city. No surprise, then, that south London’s annual celebration of Bastille Day is in its sixth year. And where better to hold an event dedicated to a country with such a gastronomic heritage than in one of our biggest foodie meccas, Borough Market.

Yep, London’s Bankside goes Gallic this weekend, with a big street party in and around the Market on Sunday 14 June. Celebrating the best of French food and culture, it will include, bien sûr, much fine food – as well as a French demonstration kitchen, foodie film screenings, a salon where you can learn our cross-Channel friends’ London history, snail races, a craft-themed marché Francais in Vinopolis Piazza, bilingual story-telling for children, French bingo, pétanque and plenty more. Phew. And then, as night draws in, the Market livens up with theatrical performances and a DJ spinning tunes. The whole thing goes on until 10pm. But if that’s not enough for you, in honour of our French friends this side of the river, here’s our guide five of the Frenchest things to do in south London, all serving up, ahem, plenty of va va voom.

The London Pétanque Club, Kennington
Pétanque; aka bowls with a continental twist – threatened to become London’s hippest sport a few years back, thanks to the likes of Karl Lagerfeld hosting tournaments and Chanel designing leather-bound boules sets. But when the (now, of course, defunct) East London Petanque Club formed, the gentle sport’s hipster days were numbered. Cleaver Square in Kennington, however, was oblivious to such urban faddishness. The tranquil little square has been famous for its petanque – or boules – games for years and is home to the The London Pétanque Club. Games take place outside the Prince of Wales pub (no need to be a Club member, just turn up). Even if you don’t fancy partaking in the gentle sport yourself, if you can bag a seat outside this busy boozer on a sunshiney afternoon, it’s just as relaxing to watch. Cleaver Square, SE11

Gastro, Clapham
This old-school Clapham Common restaurant/café/bar, with its beautifully authentic interior, remains one of the most French, French spots in south London – and the staff will often address you en Francais. Bang opposite the Picturehouse cinema, perfect for a pre-cinema Pastis or croque monsieur, particularly on a balmy evening when you can sit in the pedestrianised street outside.67 Venn St, SW4, tel: 20 7627 0222

The Lobster Pot, Kennington
Fine, fish-heavy dining in eccentrically sea-themed surrounds. Inside This SE11 stalwart is styled like a 1950s submarine, but the acclaimed cooking (especially the famous eight-course “surprise” menu) is far from kitsch. The place has been run by the same, French-Mauritian couple – Herve and Nathalie Regent – for 23 years, and two of their sons now also run the Brasserie Toulouse Lautrec next door, too. 3 Kennington Lane, SE11, tel: 020 7582 5556

Symphonies of Life: The Films of Jean Grémillon, BFI Southbank
Although critically acclaimed in his homeland, film director Jean Grémillon is less known internationally. As part of a retrospective, the BFI is screening some of the best work from this early 20th-century director, who is often compared to the better-known Jean Renoir and Marcel Carné. What better chance to catch a glimpse of one of France’s greatest forgotten cinéastes? Magnifique! BFI Southbank box office, tel: 020 7928 3232. Or book online.

Institut Francais, South Kensington
OK, so it’s just the wrong side of the river, but an easy hop from this side of south London (the 345 bus from Peckham, via Brixton and Stockwell to South Ken is excellent). With the aim of encouraging a cross-cultural exchange, the Institut Francais presents the best of France. The Ciné Lumière screens the cream of French cinema, showing a different film each night, while its Café Philo even holds laid-back philosophy debates for those who wish to unleash their inner Voltaire.  Confusing your matinées with your soirées? The Insitut also offers language courses so you can brush up on your French – ooh la la. 17 Queensberry Place, London, SW7 2DT