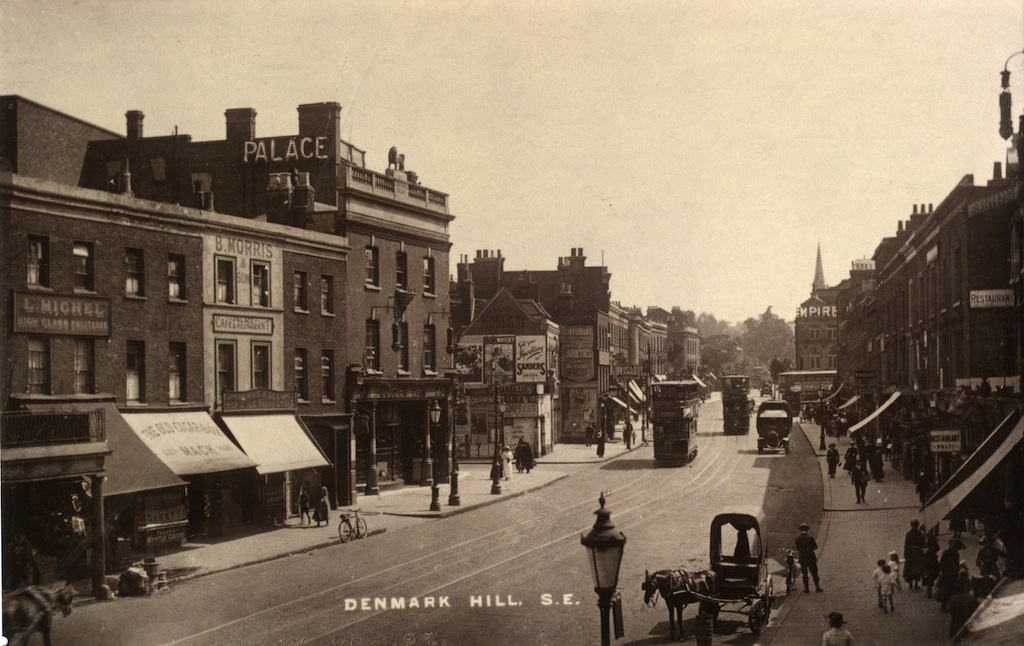 Camberwell, July 2013: hustling traffic thoroughfare, hub of artistic endeavour and home to a not atypical diaspora of internationals and languages.

Not known however for a night out at the theatre.

But it wasn’t always this way. At one point, Camberwell boasted around half a dozen theatres or cinemas, from the Metropole (which stood at the top of Coldharbour Lane, now home to Nando’s, see image further down) and the Cinematographic Theatre (still there as the somewhat forlorn, paint-peeling pool hall) to the jewel in the crown that was The Camberwell Palace of Varieties, pictured above, which stood at 23-31 Denmark Hill.

It was the Palace that first caught my attention; the name alone suggested a place that belied the contemporary perception of SE5. With transatlantic revues and local luminaries such as the clog-dancing music hall comedian/actor, Dan Leno, regularly performing, it left me wondering what had happened. And had the people of Camberwell had simply lost their interest in the theatrical bombast that was so commonplace right up until the middle of the 20th century?

First opened in November 1899, The “Palace” seated over 2000 guests and was designed by Ernest Woodrow, who would go on to create The Clapham Grand (which still stands in Clapham Junction, although offering a very different type of entertainment these days).

Music hall as a genre had emerged from the back rooms of pubs and the Pleasure Gardens – albeit of a somewhat more low-brow version. And by the mid 1800s it had become so popular (and in equal measure, somewhat notorious) that purpose-built venues were beginning to emerge. Known for offering at times salacious mix of “light-hearted entertainment”, the music hall was all about variety.

Classic songs, pastiche and comedy, drag artistes and can-can dancers; what more could you ask for from a Saturday night show? The area was home to many well known writers and artists: alongside Leno, who lived at 56 Ackerman Road, pictured left, there was Fred Karno, inventor – so legend has it – of the custard-pie-in-the-face gag, and Charlie Chaplin, who lived in nearby Walworth. With emerging licensing laws, increasing competition and the invention of cinema, though, problems began to arise.

Having moved through various owners by 1948, the then Camberwell Palace Theatre was delighting the locals with so-called girlie shows. That was until 19-year-old Peaches Page “the Singing Nude” committed a crime while sans vetements. While static nudity was legally permitted, mobile naked bodies were not, and Page apparently flinched during her act when a mouse ran across the stage. And suddenly it was all over: the final curtain call happened on 28 April 1956.

Aside from the aforementioned pool hall and the former Father Redcap/Redstar – now the glitzy Planet Nollywood, another former music hall – there is virtually nothing left. An emptiness matched only by a lack of public awareness of the multitude of wonders that once graced the streets of SE5.

It was time to take action; this history was too powerful to let lie. I got together with a friend, Micky Tume, and together we set about some serious reinvention.

In 2012, The Palace of Varieties was restored – as an occasional events company. It was to be part-time revivalism with a full-time Camberwellian vision, and the missive was simple: a traditional format, reconstituted for a modern palate.

Taking the unlikely setting of St Giles Parish Hall (sister venue to the recently reopened Crypt), we transformed the space for the night. Hosted by Mr Dave Chameleon, aka the comic bellboy, and boasting a line-up including animal impersonators and a half Italian/half Welsh 1980s TV advert enthusiast (in the shape of plastic organist, Don Tempi) the show sold out and careered its way into the hearts of the audience.

We returned in June 2013 to help launch the Camberwell Arts Festival (ably assisted by the wonderful Mrs Mills Experience – a piano-thumping singalong tribute to the original Mrs Mills, pictured right) and were back for a further installment of misaligned bombast with The Bijou Palace of Varieties: think Granada TV’s 1970s variety show, the Wheeltappers and Shunters Social Club.

In short, then? Palatial reinventions have only just begun.

Words: Michael Armstrong and photos: The Theatres Trust (see below for info).

This is box title
Our amazing archive images come via The Theatres Trust, which is the national advisory body for theatres, protecting theatres for everyone. It is a statutory consultee on theatre buildings in the planning system, provides expert advice on the sustainable development of theatre buildings and helps promote awareness and solutions for theatres at risk. Thanks guys!