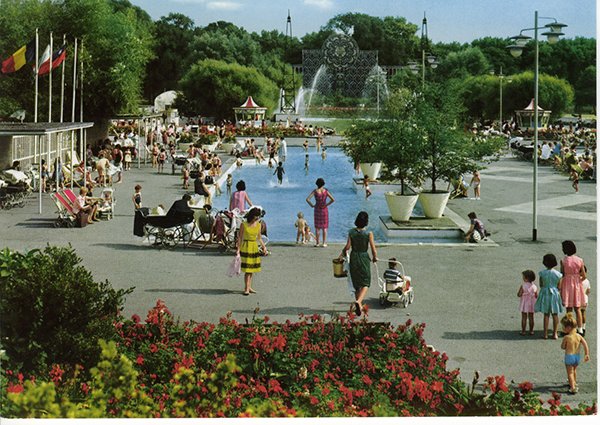 
As a new exhibition opens, featuring the photography behind Britain’s most recognisable postcards from the 1960s and 70s, Kate Burt looks at the appeal of these images that depict an era when London life seemed simpler

Recognise this view of Battersea Park? Unless you were around back then, chances are you won’t. Because the Battersea Funfair closed in 1972 and was built, along with Battersea Park Lido, below, as part of the Festival of Britain’s pleasure gardens. But aside from a bit of urban history, what we think is really interesting are the photographs themselves – which are part of a new show this month at the Photographer’s Gallery. Just take a look at the images below.

The name John Hinde may not sound familiar, but for anyone who’s ever rummaged through a box of old postcards at a carboot, or nosed through Granny’s holiday mementoes, the photographer’s work will be instantly recognisable. Once one of
the world’s most successful postcard companies, John Hinde Ltd was famous for its kitsch, colour-saturated images – particularly during its heyday, in the 1960s and early 70s. The cards have since become collectors’ items and fans include the photographer Martin Parr and designer Wayne Hemingway, who are evangelical about the technical innovation and historical value of these once-throwaway
holiday souvenirs.

The cards were once prolific in seaside shops and rural post offices; they are the images of paddling children clothed in primary colours, ugly municipal buildings brightened by brilliantly-hued cars, beach views framed by vibrant hydrangeas and Mediterranean skies. An idealised, comfortingly twee version of the drab British holiday you were really on. All of it carefully constructed both by Hinde’s meticulous staging and pioneering processing techniques. Which you can get some idea of looking at the dazzling retouch job above left (we’ll come back to the image on the right in the box-out at the bottom of this story).

The late John Hinde, a former Blitz documentary photographer, started his company in Ireland in 1956 – at the bungalow he shared with his trapeze artist wife. He was bankrupt at the time, following a disastrous attempt to launch his own circus during one of Ireland’s wettest ever summers.

A couple of years ago, I tracked down Edmund Nagele, one of the photographers from Hinde’s prolific studio. “Being a postcard photographer, like a passport or wedding photographer, wasn’t something you’d brag about,” he told me over the phone from Bavaria, where he now lives. When Nagele joined the expanding company in the early sixties, he was given a caravan still bearing the “John Hinde Show” circus signage in which to travel around drab seaside towns for five months of the year. Nagele’s target was just 80 shots per season. Because film was so expensive, there were no tests or contact sheets: the first shot was the one that got printed.

And it’s not only the techniques that now seem archaic. The images are a snapshot of a vanished world – one where you could leave your door open, and when strangers would greet you in the street. Nagele has fond memories of the day two elderly ladies, inquisitive about what this young man was doing under a black cloth on the roof of his car, invited him to their house for tea, pressing a book of poetry into his hand as he left. No one ever accepted money for the hydrangea bushes he procured from their gardens to stage shots, and people were always happy to be “cast” for pictures (“You’d make sure the pretty ones were in the foreground,” Nagele says with a laugh, “it was a great job for picking up girls.”)

Even the Police were charming – despite suspecting Nagele of being
an IRA terrorist on one occasion.
“In London, then, you could park so easily,” says the photographer.
“My favourite spot was in front of Parliament Square and one day I’d
left my car – which had Irish number plates – there, full of photographic gear. The Troubles had started by then, and when I returned the car was black with police. But they were so polite: ‘May we take a look inside?’ they asked. I didn’t even get a ticket.”

And it is the depiction of this era, when life seemed simpler, that is a big part of the postcards’ appeal to a modern audience. “Things from the past become classic, like cars,” says Nagele. “It doesn’t mean it’s better, but you can’t take these moments again. Progress has destroyed a lot of things.”

All but the technicolour lido image in this story are prints from John Hinde Ltd’s original transparencies, painstakingly restored by the John Hinde Collection (run by Marcus Davies and Michelle Abadie). Ten of the prints will be on show as part of the Photographer’s Gallery exhibition as part of its Mass Observation: This is Your Photo. In addition, there will be over forty of the prints available to buy from the gallery, starting at £600.

Mass Observation: This is Your Photo is in the main space at The Photographer’s Gallery, 16-18 Ramilles Street, W1, from 1 August – 20 October 2013. Admission free.