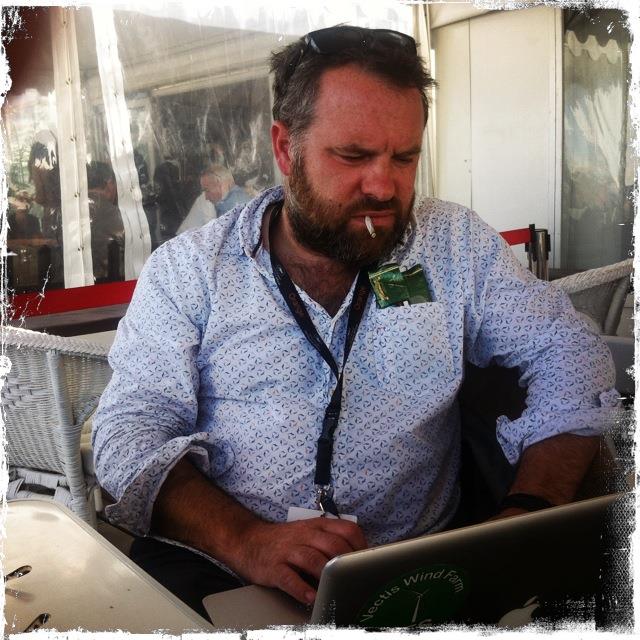 My earliest south London memory? Falling for a girl who lived near
Kennington Park

Bruce Webb is an award-winning filmmaker who has lived in the SE17 postcode for nearly 20 years and also has an affinity with the Isle of Wight, where he runs the island’s annual film festival. His debut feature film, The Be All and End All, came out in 2010.

When were you happiest?
Walking my dog aged nine on Priory Bay in the Isle of Wight. In south London it was watching the band Naked Ruby in Iliffe Yard, Kennington.

Where would you like to live in south London?
Where I do now – Elephant and Castle.

What is your favourite south London sound or smell?
Jasmine in the back garden in Elephant and Castle.

Who is your favourite south Londoner?
Hard to say – there are so many alive and dead. Probably my neighbours as they all say hi and pull together when the shit hits the fan.

What is the most important lesson life has taught you?
Trust your instinct, keep in contact with your friends and family and don’t try and pick up dog shit while on your mobile phone.

What is your earliest south London memory?
Falling for a girl who lived near Kennington Park.

What makes you unhappy?
Can I have two? People who don’t say thanks at Zebra crossings when you stop for them… It’s a special thing we have here and we are going to lose it if we don’t use it. And the loss of small shops East Street and the Walworth Road – especially my butcher’s.

What simple thing would improve your quality of life?
More hours in the day to watch films, see family and friends and do all the creative things I want to do.

What is your most unappealing habit?
Criticising people about not recycling. I’m an eco facist.

What is your guilty south London pleasure?
Beer on my own with a copy of Sight and Sound at the Beehive pub on Carter Street, Walworth.

Where do you hang out?
The Beehive pub, my back garden, my local corner shop.

Who or what do you dislike and why?
The Labour government people who lied and then didn’t listen to us when we marched against the Iraq war.

Best south London gig or night out?
Hole in the Wall, Waterloo, on Sunday nights.

Your worst south London experience?
Seeing my local library on fire [the Cuming Museum and Newington Library, which remains closed after the fire in March this year].

What do you most dislike about your appearance?
Paunch, collection of chins, thinning hair and clown size feet.

What’s the worst thing anyone’s said to you?
Bruce, sorry to disturb you on set, but I only have three months to live.

Tell us a secret…
I fall in love with someone different every day.

What has your career taught you?
That money is not a good reason to take on a project, but every now and then you have to otherwise you can’t pay for the things you want to do. But money is seductive… so beware.

Trailer via Vimeo, for The Be All and End All

The house I live in is…
A Yates Estates house. The family built them in the 19th century and still own hundreds of them. They are brilliant. And the best thing about the scary and very socially cleansing and money-centric regeneration of Elephant and Castle is that so much of the housing that’s left remains social.

What is your greatest life achievement?
I should say film awards or something but I think, looking back, it’s travelling around India when I was a teenager – and hitch-hiking a lot of the way… and not getting kidnapped when I was on the list… But that is another story.

Describe yourself as an animal
I like a lot of dogs but to compare myself to a dog might not be quite right.

… building or landmark?
The Health Centre on the Wally Road – it has a sign outside saying: “The health of the people is the highest law,” which sounds about right to me.

…place to eat? East Street market – amazing place, and always changing but I have always had the best food from there.

…secret? There are loads of bats in Larcom Street.

Find out more about Bruce’s film-making at his production company,Whatever Pictures. The Isle of Wight Film Festival begins on 14 August. Read about it here. @brucewebb1 @IOWFF