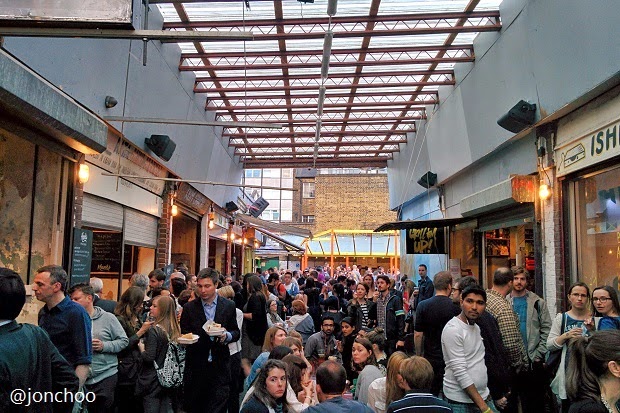 Still not made it down to Street Feast at Lewisham’s atmospheric Model Market yet? The final bash of the year is this Saturday, and if it’s anything like last weekend, it’ll be rammed.

We have to admit it was our first – and much belated – visit, despite having been to the Dalston original, and various pop-up Street Feasts about town.

Sneaking in just before the £3 charge hit at 7pm, the buzz was palpable. The crowd? A real mix:  young families with kids crawling about, half-chewed bun in paw; students and hipsters smoking rollies; Saturday night funsters guzzling cocktails; and thirtysomething couples, cooing over their shared plates.

Part of the appeal is, of course, the dilapidated location: ten cute “micro-diners” occupy characterful peeling former outlets, offering all manner of (mostly unhealthy) temptation, from hot dogs and tacos to a BBQ grill. So you can either sedately sit in, restaurant-style (a la Brixton Village), or gobble it down in the open-air yard to a lively soundtrack (The Cure’s Lullaby was sounding particularly fine).

Pint in hand, we battled the snaking queues to sample crispy calamari from the Cheeky Italian, before Rola Wala’s naans, firstly with pulled pork and, later, a deliciously sweet beetroot, coconut and paneer daal. These were swiftly followed by meltingly soft dumplings and shiny-brioched Malaysian chicken sliders from Sambal Shiok. And then, well, after that, things got a bit blurry. This was, inevitably, after a couple of craft beers, and a rum punch (or two).

Fortunately, we avoided chucking in wine into the mix as well, although couldn’t help but smile at the name of the bar – Winyl (wine and “old school” vinyl. Groan).

There were, inevitably, a couple of downsides: the most popular dishes were fast running out by 8pm on many stalls, with almost every outlet empty by 9 or 10pm. And the draft microbrewery lagers and ales were snapped up very quickly too, with the only option then being far inferior bottles of Moretti, or Red Stripe in cans.

That aside, it’s worth the effort. Get there early; tuck in. Although, as it’s such a hit, we’re somewhat surprised the organisers aren’t extending its run into what looks like a warm October.

This is box title
Streetfeast at the Model Market finishes this weekend. Opens 5pm-1am (£3 entry after 7pm). 196 Lewisham High Street, SE13 6LS (though the entrance is around the corner on Molesworth Street).