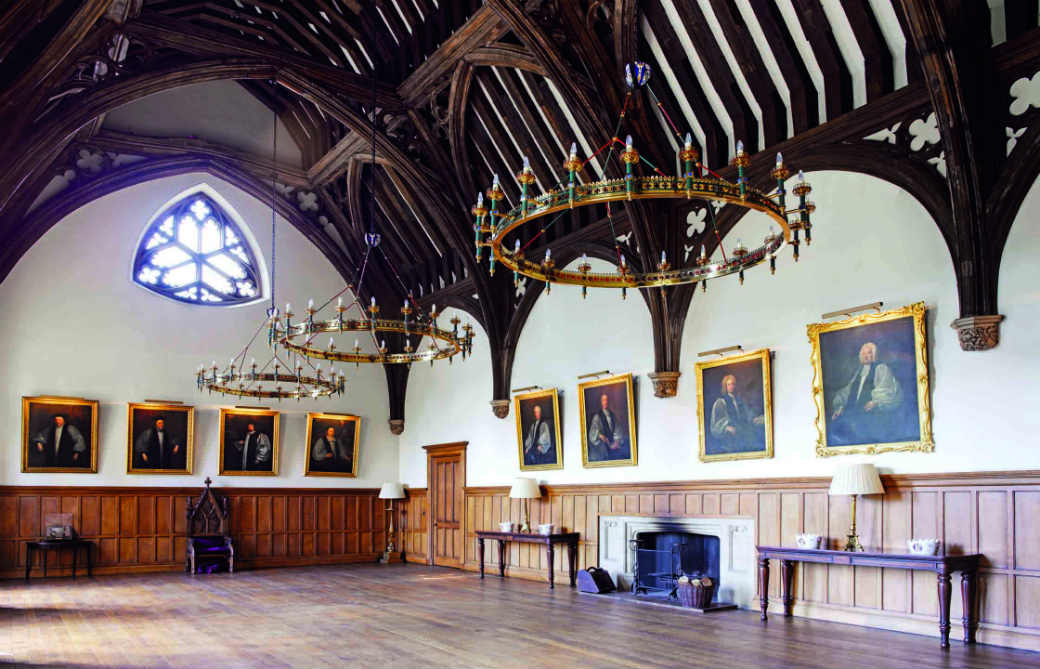 Lambeth Palace, the Archbishop of Canterbury’s official residence, is a spiritual place that bears the marks of 800 years of turbulent history.

The palace’s history began in 1190, when the Archbishop of Canterbury, Baldwin of Forde, traded the Isle of Grain in Kent for 24 acres of Lambeth territory from the bishop and monks at Rochester, but it was Stephen Langton, appointed in 1207, who was the first Archbishop to live in Lambeth Palace, bringing the clergy closer to Westminster and the Royal Court.

The collection of buildings are mainly from the fifteenth and sixteenth centuries, but the chapel and crypt are thirteenth century, finished in 1220. The vaulted undercroft originally stood alone with an external stair at its western end, but it is now connected to the palace. It was initially used for storing beer and wine, with its floor level likely raised to counter flooding from the Thames.

Indeed, the high position of the window seats suggests floodwaters rose to several feet above the current floor. During the Second World War, Archbishop Temple used the crypt as an air raid shelter, with local people invited to take sanctuary. It was only in 1987, in the time of Archbishop Runcie, that the crypt became a permanent chapel.

The fresco of Christ in Glory hanging on the crypt chapel’s wall was given by Pope Paul VI to Archbishop Ramsey in 1966 to mark what was the first official meeting between Canterbury and the Papacy since the Reformation.

Also dating back to the thirteenth century is Lollard’s Tower, which bears one of most poignant features of Lambeth Palace.

An empty niche on the riverside wall once held a statue of St Thomas of Canterbury, which used to be saluted by Thames watermen as they passed, until Henry VIII ordered it to be removed. Lollard’s Tower once housed a prison. Seven iron rings remain anchored to the wall, and prisoners’ graffiti can be found there. The tower was largely gutted in the Blitz, as were other buildings at Lambeth Palace.

In the seventeenth century, Archbishop Laud invested in modernization of the private chapel of the Archbishop by funding a programme to include a new pulpit and altar table, a richly carved screen and pews. Sadly, the stained glass windows he commissioned ran afoul of the Puritans, who smashed every one. Laud’s High Church policy reflected in sermons, likely from that new pulpit, did not impress the Parliamentarians; like his king, he made the trip to the block. A Second World War incendiary device put paid to the glass again, and the ceiling was destroyed at the same time. Scorch marks can still be detected on the marble floor.

The south front of Lambeth Palace, with crenellated towers guarding the main entrance, is forbidding, even stark in style, but the influence of Westminster and St Alban’s abbeys can be seen in the intricate ornamental work.

The Great Hall houses much of Lambeth Palace’s library. It is red brick with stone quoins, entablatures, battlements, capping and window tracery, and has been reconstructed and revamped several times. In Tudor times, Archbishop Warham received the theologian Erasmus and painter Holbein here, and Henry VIII enjoyed Cranmer’s largesse here.

A century later, with the Crown in disgrace, a certain Parliamentarian Colonel Scott ordered the hall’s demolition, putting valuable building materials up for public auction, and using what remained for billeting Roundheads. Not until 1660 would Archbishop Juxon, who had seen Charles I on his way to the block, restore the hall, insisting on a replication of its original medieval style.

Despite Juxon’s enthusiasm and efforts, the hall went all but unused for decades until the nineteenth century. Neglected and grubby, it became part of Edward Blore’s restoration programme, the architect giving it a new lease of life as the library. The Great Hall’s hammerbeam roof was another casualty of the Blitz.

In the post-war restoration programme, Archbishop Juxon’s design was copied. Morton’s Tower is a red brick castellated Tudor gatehouse, which serves as the entrance to the modern palace. It was built close to 1490 by Cardinal John Morton, who lived in the tower briefly. On the ground floor of the south battlement tower is another small cell used for sixteenth-century incarceration.

When a young Thomas More joined the Lambeth Palace staff as a page aged twelve, he is believed to have lived in this tower. As a man, Sir Thomas More was summoned to the Guard Room at Lambeth by Thomas Cromwell to swear the Oath of Supremacy declaring Henry VIII head of the Church of England, which he
declined, leading to his execution.

This is box title
This is an extract from Unseen London by Peter Dazeley and Mark Daly, published by Frances Lincoln and priced at £30. Find out more about it here