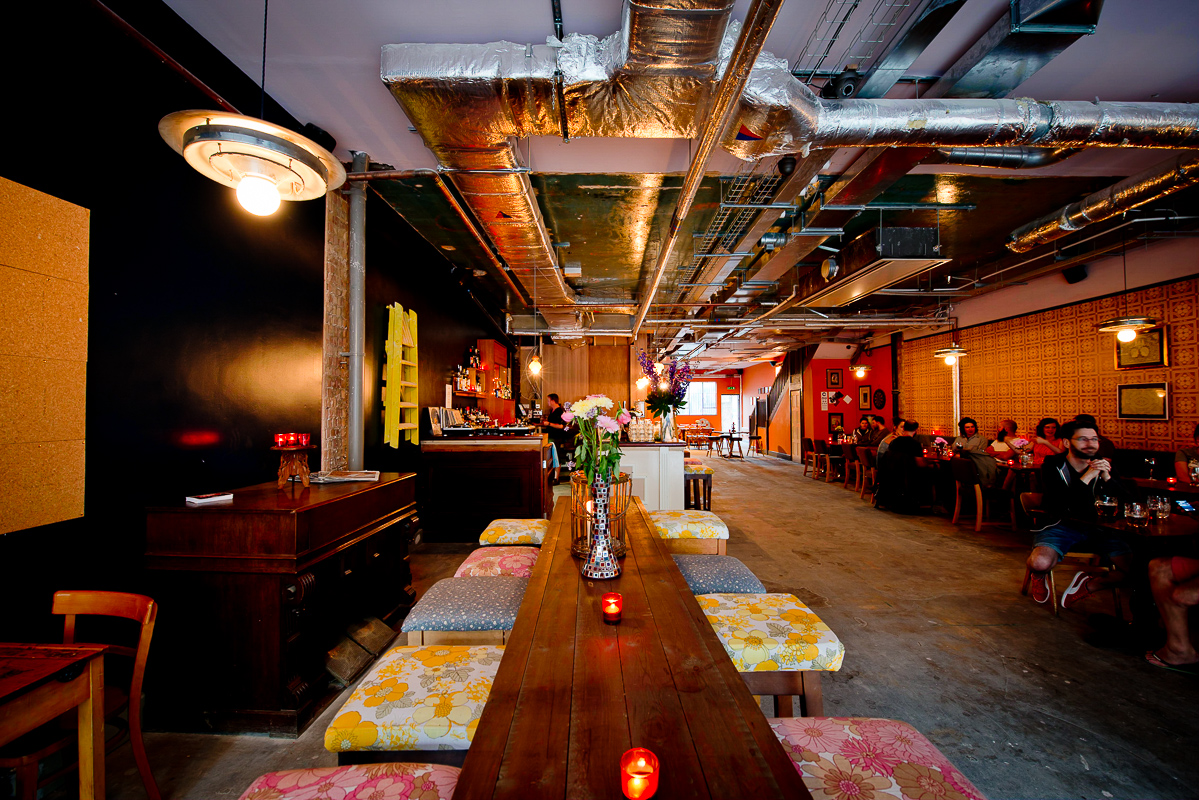 The Job Centre is putting the locals to work. Not (yet) another empty election campaign slogan, but rather a summation of the latest goings-on in Deptford High Street’s newest bar.

For the pub is providing gainful employment to a rotating line-up of London street food vendors, right in its very own kitchen. It’s all happening across the spring, with each stall taking the reins for three nights only (Thursday to Sunday) in what’s been tagged the Kitchen Hijack. Hot dog hotshots Oh My Dog! were selected as the inaugural chefs in residence, so I hotfooted it (last one, promise) across the south-east to see what all the fuss was about.

But before we get into all that, some background. The Job Centre opened to no little controversy back in June 2014, attracting local and national press coverage alike amid accusations of its contribution to – and, more pertinently, its attitude towards – the perceived gentrification (read: social cleansing) of the area.

The closure of the real Jobcentre in 2010 was met with a collective outcry by many of those local to Deptford, an area traditionally high in unemployment. A campaign was waged to convince the government to keep it open, but it was to be unsuccessful, and the building was instead sold to bar owners Antic Collective.

In light of this unrest, and amid the continuing climate of benefit cuts and rising living costs, their decision to reuse the building’s old name for the incoming bar was viewed by many as being in poor taste. Those offended saw the company as insensitive to the plight of those who had previously depended on the real Jobcentre for employment opportunities, accusing them of lacking compassion for their adopted community. For their part Antic were quick to issue an apology for any offence caused, stating the bar was in fact the latest in a long line of their establishments named after the previous tenant – Balham Bowls Club, and Tooting Tram & Social to name two. And given its purported popularity with Flat Whiters, there’s certainly an argument that the Job Centre is bringing new blood – and with it, new money – to the Deptford area.

For all that, I couldn’t help but feel some sympathy with the campaigners upon my visit. Much of The Job Centre’s décor – the photo of disaffected punk rockers, the kitsch tables and weathered chairs, the tacky, dated wallpaper – seems to deliberately evoke the 1970s. Indeed, the bar’s website previously described The Job Centre’s design as ‘inspired by its function as a place that once served the unemployed’; one suspects such a place seldom served so many of them as it did in Seventies Britain.

No doubt the former Deptford Jobcentre would have had its hands full this decade too, if it had been allowed to remain open. While its successor need take no responsibility for the former’s closure, to misappropriate the misery of jobseeking – with all the hopelessness and self-doubt that typically accompanies it – simply to gain an ironical identity struck me as unedifying.

Still, there’s no doubting its popularity, and Antic will be hoping the Kitchen Hijack only advances the Job Centre’s appeal. It’s certainly a clever marketing idea: limiting each ‘hijacker’ to just three nights means foodies wishing to sample the full repertoire will find themselves becoming very familiar with the bar’s questionable interior. And, as intended, it should also serve to build anticipation for the arrival of the Job Centre’s own permanent menu – whenever that may be.

Though it may be early days, the plan seems to be working: Oh My Dog!’s head honcho Joel informed me they’d had to increase staff numbers each night to deal with the growing demand. Determined to beat the rush, I quickly decided on the chilli-steakdog, eager as I was to discover whether bourbon chilli steak, sour cream and jalapenos would complement or condemn the humble hot dog – and find out whether the popularity was justified.

My curiosity was soon sated; mere minutes after placing my order, I was presented with a hot dog of hitherto unseen proportions. Buried in shredded steak, itself covered with melted cheddar and garnishes, the frankfurter was barely visible between the bulging bun. Such scale necessitates a rather undignified eating style – no knife and fork was offered – but its quality soon distracted me from any concerns over etiquette.

The jalapenos and mustard provided a spiciness that worked well in conjunction with the chilli steak, whilst the frankfurter itself was large and tasty. The filling was enveloped in a moist, dense demi-brioche bun, and complemented by a cooling tub of slaw. Safe to say then that the chillisteak-dog has a new convert.

Hot dog duly dispatched with, next up was gin tasting, provided by Edinburgh’s Pickering’s distillery, who were hoping their success over the border would be mirrored here in London. The company’s representative (“I’m not a shot girl”, she insisted) informed us that it was prudent to drink a small amount of a spirit to get one’s throat accustomed to the alcohol, and then take another glass to better discern its flavours.

Useful advice, I found, as I was far more capable of detecting some of its (apparently innumerable) hints and aromas the second time around. Whilst I can’t profess to be a gin connoisseur, Pickering’s certainly agreed with me, and I’d keep it in mind if ever I was in the market for ‘mother’s ruin’ in future.

Then, after a couple more ales, it was time to take my leave, back out into the cool Deptford night air. Traversing the deserted high street, dormant after the crowds of the Saturday market had dispersed a few hours previously, it was hard not to ponder the discrepancies between that world and the one I’d just left.

Perhaps it’s possible for these two communities to coexist; that they could complement each other in a way which brings revenue and opportunity to both without displacing or isolating the established local people. As someone who’s been complicit in the gentrification of areas elsewhere in the east, I’d certainly like to think so. Maybe that’s why it felt such a pity that, for all its novelty and quirk, the Job Centre gave such little regard to the history and sensitivities of the neighbourhood they now share.

Or maybe it’s just that gin really is a depressant after all.