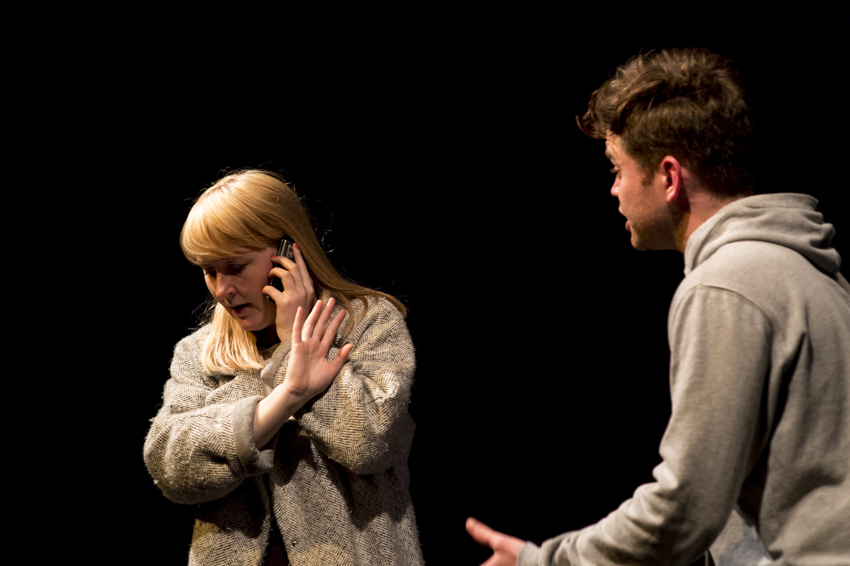 The outrage around arts cuts following this month’s general election is something of a gift to a theatre reviewer in search of an angle (or high horse). Better yet, choosing Mental Health Awareness Week to watch an exploration of a fictional relationship between a counsellor and her patient…well, this thing should write itself.

But tempting as it may be to disregard discussion of Lucinda Burnett’s Talking to Alice in favour of a state-of-the-nation thinkpiece, such an approach would be to do the play a disservice (not to mention mean going massively off-brief).

Likewise, the initiative responsible for staging the performance: now in its sixth year, the Brockley Jack Write Now Festival does a worthy job of providing a platform for new and emerging writers in south-east London. The Jack plays host to both long and short-form plays across a three-week period each May, when it also finds the time to run writing workshops and artistic discussions for aspiring dramatists in the area.

All very laudable; and yet despite that, I couldn’t help but feel some apprehension as I took to my seat for curtain up. As a lapsed theatre-lover, my once intrepid enthusiasm for challenging new works has been slowly superseded by more selective – dare I say narrow-minded – tastes. An ostensibly sober ‘two-hander’ performed in what could unkindly be described as a back room of a pub may have held appeal in my past life as a drama student, but its sway has diminished in the face of Mad Men box sets and Netflix binges.

And yet happily, the scepticism was short-lived. Talking to Alice deals with its weighty subject matter with thought and care, resisting didacticism to allow room for interpretation. Aaron Stephen Foy plays Adam, a brash Mancunian on the cusp of adulthood and overwhelmed by the prospect (and lack of prospects). After a row with his girlfriend provokes him into making a public display outside a nightclub, Adam is sent, not for the first time, to see a social worker. Enter Harriet (played by Natalie Bridge) as a green but determined mental health student tasked with counselling him into a more robust shape.

It’s a testament to both performers that the audience warm to the pair of them so readily. Adam, all nervous energy and cocksure charm, both challenges and intrigues Harriet, while her positivity and indefatigability wears down his wariness too. Together they set out to overcome Adam’s unemployment, relationship issues and self-doubt, each as invested in the outcome as the other.

Which makes Adam’s deteriorating mental state that much harder for the two of them to comprehend. A change in medication leads to a confrontation, first between Adam and another patient, and then with Harriet. Their relationship breaks down, and a shaken Harriet refers him to a more senior therapist, the titular Alice.

Although never seen, we learn that her approach to social work differs greatly from that of Harriet’s. More experienced than her colleague, Alice’s professional detachment comes off as aloof and uncaring to Adam, whose fragility reaches breaking point in the final act as a consequence. It’s left to the audience to determine whether we should be apportioning blame for all that leads to the play’s alarming climax; and if so, to whom?

In a Q&A after the performance, writer Lucinda Burnett revealed her intention was to explore the tricky business of defining when ordinary human emotions become something to be labelled and treated. Certainly there’s much to relate to in Adam’s behaviour for anyone who’s ever been a teenager: narcissistic and conceited one minute, anguished and overcome the next. At what point we medicate for this, and indeed how best to ‘treat’ it at all, is the question at the heart of Burnett’s subtly probing piece.

Q&A complete and seats duly vacated, the audience took to the bar to share and ponder their reactions to what they’d witnessed, myself included. And though it would be disingenuous to proclaim that the performance had compelled me to denounce the works of Davids Simon and Chase to dedicate my evenings to all things agitprop and improv, it was still satisfying to challenge some creeping preconceptions and lazy habits.

This is box title
The play has now finished its runs, but the Brockley Jack Studio Theatre is at 410 Brockley Road, London, SE4 2DH. For details of upcoming performances head here