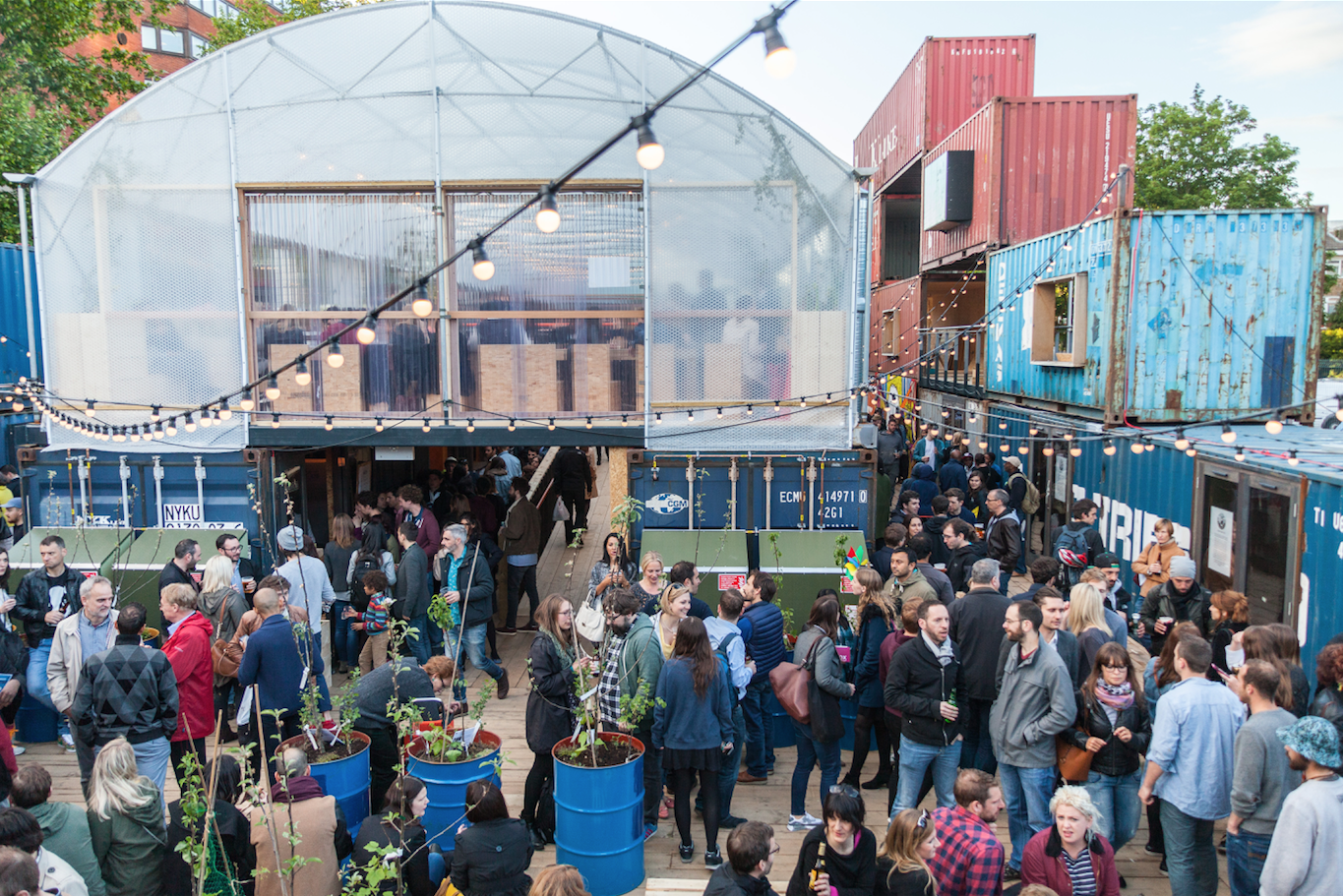 It’s a glorious sunny evening. As we stroll up Brixton Station Road, a pit stop at the Craft Beer Co is inevitable, with its west-facing suntrap pavement terrace.

Half an hour later and the shady world of shipping containers beckons. And we mean shady: even on the top deck the sun is hiding. But no matter. Commissioned by Lambeth Council, the airy space has been cleverly designed by award-winning Carl Turner Architects, and it’s easy to navigate. With no expected heavy-handed security, either.

So, first impressions? How pleasantly laidback it all is. Admittedly, it’s a Wednesday – rather than Friday – evening, and we should add that by 730pm it’s busy enough for almost every inch of plywood seating area to be squatted by an excitable twentysomething. Yet there’s plenty of room: perhaps it’s the open air – something nearby Brixton Village obviously lacks, which at times it can feel almost greenhouse-like, both a good and bad thing, according to season.

It’s very easy (though not, of course cheap) to get a drink: at Brixton Port Authority, we leave with an inexplicably strong can of north London brewery Beavertown’s new ‘blood orange IPA’ (I know, I know!) And we gulp a little bit at the tenner we have to hand over for two cans, before realising it’s a whopping 7.2% ABV. “We may as well be walking round with a Tennant’s Extra,” quips my brother.

There’s the usual mix of world streetfood familiar to pop-up veterans. We make first for Hook, the offshoot of the original on Parkway, the slight incline that connects central Camden Town to leafy Regent’s Park. Fronted by two affable Dubliners, who set up a fish and chip stall after the financial crisis, it’s their take on the seaside classic dish, with myriad acclaimed homemade sauces in tow.

Within its narrow walls – lit by bare pendants – we enjoy the sea bream tempura (£12) immensely: the batter is flavoured strongly with basil and lemon oil, and yet its potency doesn’t detract – oddly enough – from the just-opaque fish. A garlicky truffle dipping sauce adds a lip-smackin’ earthiness, too.

The other sauces are moreish: bright green mushy peas are a winner, a warming chipotle is a fine accompaniment to thin potato wedges (which, if we are to quibble, could have been crisper), and the speciality ketchup is emboldened with more than a hint of fire. It’s all washed down with a really fruity – “too fruity,” said my brother – Brixton pale ale.

We take a walk: past Zoe’s Ghana Kitchen, past Miss P’s BBQ, past Baba G’s serving up an Indian and British food fusion – all earmarked for a return visit. There are prosecco stalls, pancake stalls, beer stalls, vintage and craft stalls. And upstairs is a kind of makeshift garden hangout, packed with rabble-rousers all imbibing rather than feeding. For the emphasis here is quite definitely on partying. And yet, Pop isn’t even finished: there are lots of empty and half-built units, with a whole new area yet to open.

We end up after a drink and a browse at Donostia Social Club. It’s possibly the most stylish diner in the park, with its on-trend counter seating and attractive plates of pintxos (tiny tapas from Spain’s Basque region) as well as good list of larger sharing plates. An easygoing Verdejo white is our choice for scallops – cutely presented in-shell – with green chilli sauce, almonds and pisto (a Murcian speciality of tomatoes, courgettes and peppers).

Iberican pork is impossible to ignore on any menu, and so we plump for braised cheeks with a butter bean puree. It’s a rich, hearty dish, perhaps too much even for what is now a breezy June evening. Our only criticism? The puree loses its identity somewhere underneath all that slow-cooked meat. On the other hand: maybe that’s the intention.

We also have our eyes on the good range of vegetarian items – griddled asparagus and romesco, piquillo peppers with aubergine and blue cheese – and these, we decide, we’ll also try another time.

By now it’s busy: there’s absolutely nowhere to sit, and the outdoors – so lovely when it’s warm – is getting a little too nippy, so we wander off to Brixton Village to see how it’s faring in comparison. And of course it’s roadblock there too, the main arcade packed to the rafters.

Brixton’s older foodie sibling feels incredibly grown-up compared to the casual, easygoing, more hedonistic vibe at Pop. It’s evident that (for now) the two places can co-exist; they’re so different in feel. With its two-and-a-half year license, it’d be churlish, in fact, not to wish it well.