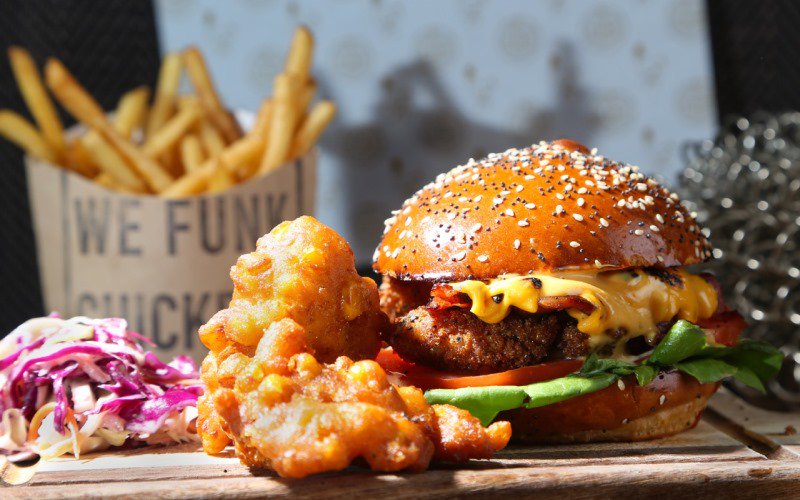 The Highwaymen, Foofighters, The Last Shadow Puppets: supergroups formed by musicians from different bands coming together. And the good news is that now the chicken world has its own version in the form of Fancy Funkin Chicken.

For the 50-cover eatery is the brainchild of none other than Nathan Pattie (formerly of very useful pintxo joint PIX), Rollo Weeks (previously Sketch) and Lars Larson (Cuckoo).

The eclectically-designed perch is located on the artery of Brixton that is Coldharbour Lane: navy walls are illuminated by jazzy neon signs that jostle for wall placing with quirky chicken-shaped wall hangings, while antique oak furnishings are juxtaposed against contemporary minimalist steel. Oh, and a herb garden’s suspended from the ceiling.

Truth be told, this is a marvellous setting for some deep southern poultry, and an accurate representation of the restaurant’s mission (or what I perceive to be their mission): to drag the age-old speciality into digital age, hip ol’ Brixton and have the two work together.

My own (guilty) personal preference when it comes to fried chicken are boneless bites, and they certainly did not disappoint. Coming with either a mild, hot or double hot sauce, these tender chicken strips fall apart in all the right ways in the mouth: covered in a thin coating containing a secret blend of herbs and spices, they make KFC a never-again.

The sourcing of all produce is admirable: it feels almost as if the tarragon has fallen straight from the overhead garden and onto your plate. Free-range chicken is from a farm in Norfolk, seemingly a round-the-world-trip in comparison to fruit that’s picked up yards from the restaurant at Brixton Market. The care that the owners have taken over selecting the source of each ingredient is evident.

Unlike my girlfriend, I’m partial to a bit of spice. If she can swallow it – so goes my theory – it’s not hot enough. So with all the bravado of Russell Crowe on a stag do, I lathered my chicken strip in double hot sauce, and wasn’t disappointed. The glaze had an impressive complexity, beginning with a fiery kick on the tip of the tongue, leading to a long, soured finish. If this sauce is available for retail then I’ll be buying it for my cornflakes.

The boneless bites were accompanied by expertly cooked fries, a little crisp on the outside but fluffy on the inside, with a touch of sweetness due to a specially selected corn oil which really set them apart from others in London. In fact I’m going to put these at the top of my just-invented ‘Must Try Fries’ list. They’re top.

And what of the honey-glazed wings? Well, the chef has used a great deal of restraint in employing just the right amount of sweetness and stickiness without making the dish too rich or the glaze too thick.

As for the sweetcorn fritters, well, they were love at first bite. If I ever lose a leg to diabetes, this is how I want it to go. The vegetable in question aside, butter and batter are the main components, and there’s the added benefit of convincing yourself that this is the healthiest way to gorge yourself, one of your five-a-day, right?

To wash it all down, I recommend a serious dose of peach iced tea. A very, very alcoholic take on the traditional Deep South refreshment, it’s a Gosling’s rum base flooded with ice tea, lime and topped off with a splash of angostura bitters. The flourish? A garnish of Brixton market peach, naturally.

In fact – blame the bitters – but it transports you straight to a Kentucky cookout, sat on the porch with iced tea in one hand and your wings in another, whispering to yourself that “Donald Trump really is the man we need right now”.

Just kidding. In conclusion? Throwing a bunch of talented folk together doesn’t always work out – the Real Madrid Galacticos project being a good case in point. However, this is far from the case with Fancy Funkin Chicken: definitely more Johnny Cash and Kris Kristofferson than Jonathan Woodgate and Julian Faubert.