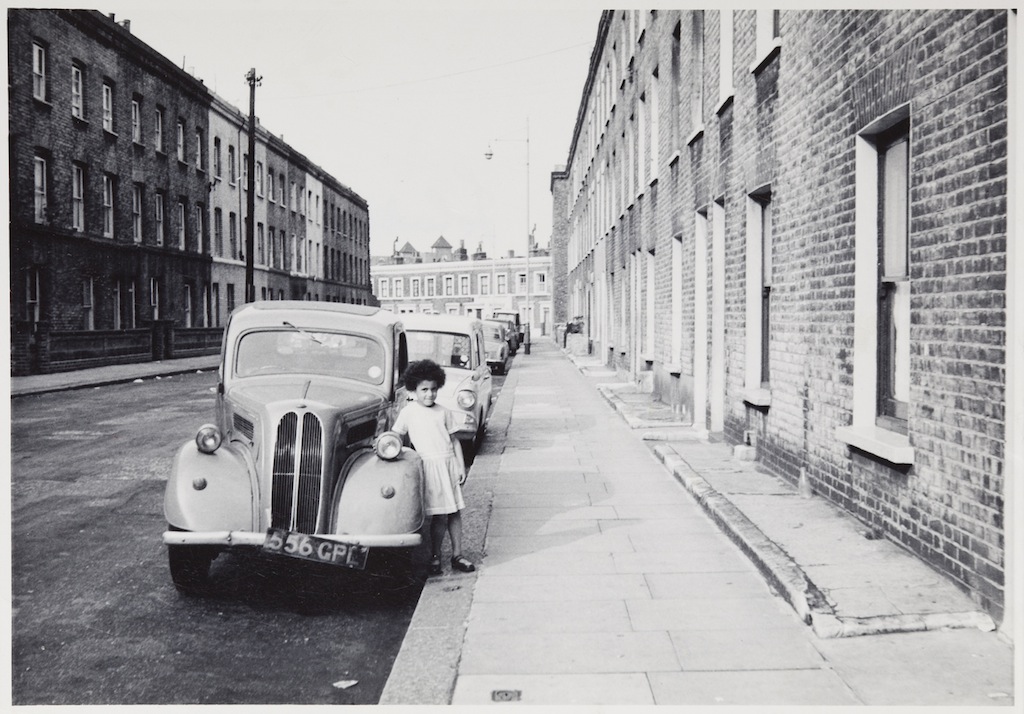 Wednesday picture: Vauxhall then and now

Gabriel Gbadamosi is an award-winning Irish-Nigerian poet, playwright, critic, BBC radio presenter and author. In his new novel, Vauxhall, he explores the streets of his south London childhood – and here, he gives us a flavour of Vauxhall in the 1970s

We had a camera, we had a car and a television set; we were rich. And then they knocked our house down; so we were poor.

Here are two photographs taken from the same spot in Vauxhall.  One taken today and the other showing the street my family lived in as it was before the slum clearances of the 1970s; both have the far pavilion roof turrets of Vauxhall Primary School in the background.

Probably, from the age of the girl leaning on our dad’s car (and that car felt old-fashioned and banged-in to us even then), the older photo was taken on about the day they landed on the moon.  We had a camera, we had a car and a television set to see them on the moon; we were rich. And then they knocked our house down; so we were poor.

I wrote a novel, unsurprisingly called Vauxhall, chronicling the rich mix of poor and immigrant families that made up the Vauxhall of my childhood, clustered in bomb-damaged slums within the sound and under the spell of Big Ben. We were always at the centre of things when it came to the News at Ten, listening to the bong of Big Ben on the television and then again coming more slowly in real time over the river Thames. Being happy, we learnt, does not save you from the bulldozers; our fragment of early, post-war multicultural community was swept away with the rubble.

Nowadays Vauxhall is where the next generation of skyscrapers in London is going up. It already has the high-profile James Bond/MI6 building, the anonymous-looking Serious Organised Crime Agency, the Metropolitan Police at Tintagel House and, coming soon, the new US embassy. So the gay village of pubs and clubs in Vauxhall, far from being discreet, bursts into night-life on the CCTV surveillance cameras of the security state. A new cluster of high-rise, swanky river-view apartments by Vauxhall Bridge is known locally as “the mosquito coast”, topped as it is by a row of strange, insect-like designs.

The rich are moving in to Vauxhall; developers are building or applying for planning permission in every direction. The spectacle of the recent helicopter crash into the latest, unfinished round tower has put Vauxhall squarely on the map. What might yet save the little patch of green seen in the photograph above from development is not that it was where I once used to live, but that it was the site of London’s world-famous Vauxhall Pleasure Gardens – famous, that is, for its nights-out, its nightingales, its dark walks, neo-gothic Chinese pavilion and having Handel as the chief of its orchestra.

Perhaps the fragmented cluster of local community groups in Vauxhall can pull together to save themselves from being glassed and concreted over. However, the two pillars that have gone up at the entrance to the newly-renamed “Royal Vauxhall Pleasure Gardens” are themselves round, dark towers, so perhaps the game is already up. What remains to be seen is what Prince Charles, whose Duchy of Cornwall lands in Kennington are to be overlooked by these skyscrapers, and whose predecessor as Prince of Wales was a frequent visitor to the Gardens at Vauxhall, will think of the architecture.

1 thought on “Wednesday picture: Vauxhall then and now”

1 thought on “Wednesday picture: Vauxhall then and now”