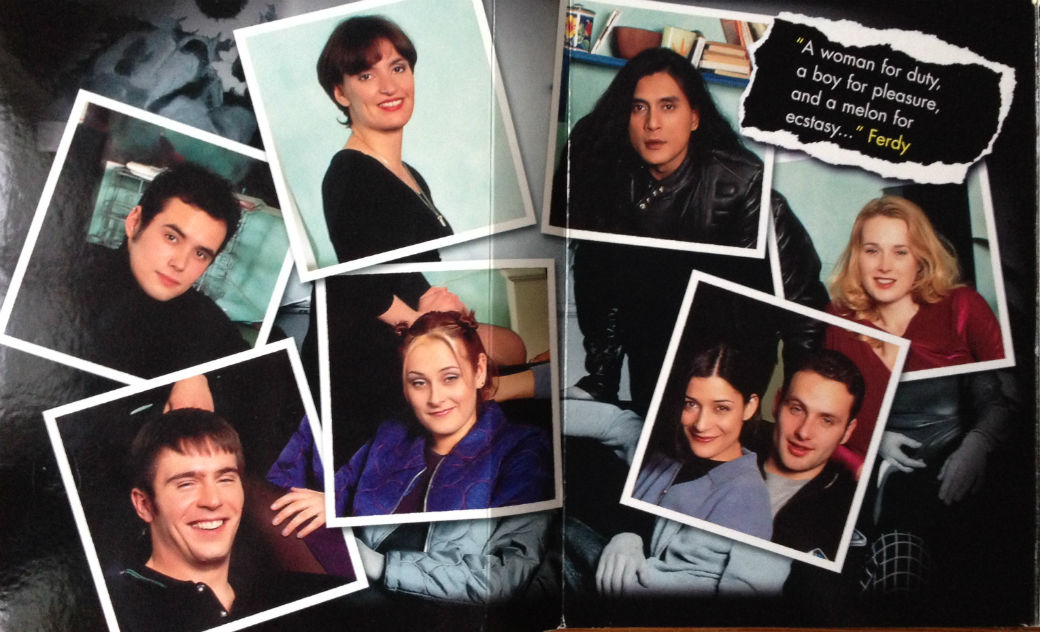 In an idle moment online the other week, I snapped up a complete box set of This Life, the ground-breaking mid-90s BBC2 series based in south London.

For those that were too young, This Life, set in Anchor Terrace on Southwark Bridge Road (now redeveloped as luxury flats), was pioneering in its depiction of half a dozen friends setting up home after graduating.

Shot with grainy, hand-held cameras so beloved of the era (and reaching an apex in movies like Blair Witch Project), its hard-nosed storylines, language, casual drug-taking and explicit sex all made it cult viewing if you were – like me – roughly the same age. And each episode had a terrible 90s punning title too (example: One Bedding And a Funeral). By the time the second (and final) series was half way through, the show and its young stars were front page tabloid fodder.

The premise? Miles (Jack Davenport), Anna (Daniela Nardini), Egg (Andrew Lincoln) and Milly (Amita Dhiri) are all law graduates who move into a shared house with Warren (Jason Hughes), who they were not friends with at university. Miles is the spoilt and myopic alpha male, Anna the gobby Scot who “believes in booze”, Milly the house misery, all down-turned mouth and long hot baths, and Egg an unhappy joker. As for Warren? Proud, gay and sexually adventurous – cue scenes of nocturnal fun on Clapham Common – his lifestyle challenges everything conservative Miles thinks he knows about life.

In fact, antagonism, and the ability to “get on” with people (or otherwise) is a motif that runs through the series, perhaps accounting for its broad appeal. As for me and my friends? We all lapped it up, arguing over who we fancied.

So what’s it like watching again it in 2013? Well – deep breath – not as good. Perhaps it’s inevitable, like revisiting a favourite novel or movie, but the once zeitgeisty shaky camera style is quite tiring now; and London, all grey pavements and the crush of suits in smoky pubs, is a drab archaic city. And isn’t it a little odd that we all found the lifestyles of a bunch of trainee lawyers so aspirational? But most surprising is how little actually happens, compared to contemporary dramas. This is character-led drama, first and foremost. No bad thing, in theory, of course.

But the first series is hard work. Of course it’s fun seeing world-famous actors like Jack Davenport and Andrew Lincoln fresh-faced, but one initial storyline  – a multi episode liaison between Miles and drug addict Delilah – is sub-Trainspotting awful. Egg’s internal angst over his new job in a law firm and love of “footie” is equally yawnsome. Things improve with Milly’s illicit pursuit of boss “O’Donnell”. And even the appeal of Anna – who at least back in the 90s every girl wanted to be like, every bloked fancied, and every gay boy wanted to hang out with – is less obvious. There’s just an awful lot of moaning.

It’s only in season two that both the writing and plots sharpen up. There’s more warmth and humour, partly down to previously minor down-to-earth characters like Joe (a baby-faced Steve John Shepherd) and Kira (Luisa Bradshaw White) taking centre stage. And Egg’s cafe job with cheeky Nikki (Juliet Cowan) displays a lightness of touch. Most famously? Enter Rachel (Natasha Little), Milly’s smiling “nice” blond assistant who is so perfect that you know it can only end in disaster.

This Life’s legacy, however, is unapologetically one of sexuality: a very raw, honest portrayal of firstly Warren (who gets bust cruising, losing his job) and then, more powerfully, of bisexual Ferdy (Ramon Tikaram), a dour lad caught between a failed engagement to a woman and a denial of his true self. Grumpy, laddish, real, he rejects gay bars and camp men; and yet the scenes in which he attempts to bond with an uninterested Miles are excruciating.

Storylines like this give the show its place in the pantheon of TV history.  Writer and broadcaster Paul Burston says: “The matter-of-fact way they handled homosexuality was so refreshing at the time.” Andrew Moor, Reader in Cinema History at Manchester Metropolitan University, adds: “The gay ones turned out to have inner depth. While Warren was clearly NOT cast for looks, everyone else was; but he became the most rounded character while the straight males just kept getting tested and found to be shallow.”

Yet the odd thing about This Life is that many gay men seem to remember the hard-talking Anna with more fondness than these pioneering gay characters. “We still talk in This Life catchphrases a lot,” offers writer Greg Thorpe, “‘Doing an Anna’ is basically having a heavy night and smashing a bottle of wine. Anna was the most important thing in it. And smoking.” Moor even reckons: “No gay men were watching the gay characters because they all identified with Anna or were busy staring at Andrew Lincoln, whose arse was everywhere.”

So despite the show’s other shortcomings, nostalgia is a powerful drive; and there remains something compelling about the series for thirty and fortysomethings today, with its particular sense of place and time. A quick Facebook poll this week, for example, unleashed a mass outpouring, especially lustful crushes on the young Andrew Lincoln (“I was in love with Egg!”)

But men’s magazine journalist Lee Gale is altogether more reserved: “They all wanted their heads banging together from what I could see. I like to be able to get behind a character in a series, but there wasn’t a single person I liked. I watched it for a while, thinking I was either hard-of-learning or just wasn’t paying attention, because so many people were talking about it. I turned it off in the end.”

And while Gale might be a lone voice, a re-watch of a once-loved show serves as a reminder of the transience of life; a bit like seeing friends who unbelievably haven’t changed for nearly twenty years.

The simple truth is that we are not the people we were in 1996. We’d cringe equally looking back on our own lives; and, more importantly, why on earth should anything so of its moment exert the power it once did?

This Life Top 5: facts you may not know

1. A pre-fame Ricky Gervais was “musical advisor” on the show (as partner of the show’s producer Jane Fallon) and the soundtrack is a right old mid-90s nostalgia fest of Manic Street Preachers, Blur, Pulp and, er, Reef.

2. The first series was understandably slammed by crtics and ignored by viewers. It was only a rerun after Newsnight that made it a “cult” hit.

3. Acclaimed playwright Mark Ravenhill was drafted in for a third series, which was then aborted. The idea? To end “on a high”. (The 2007 Reunion is best forgotten.)

4. A super-young Martin Freeman appears as a partygoer who steals some money in series one. Hollywood seems a long way off.

Stephen Emms is the founding editor of the award-winning cultural guide Kentishtowner and co-founder of London Belongs To Me, which publishes Below The River