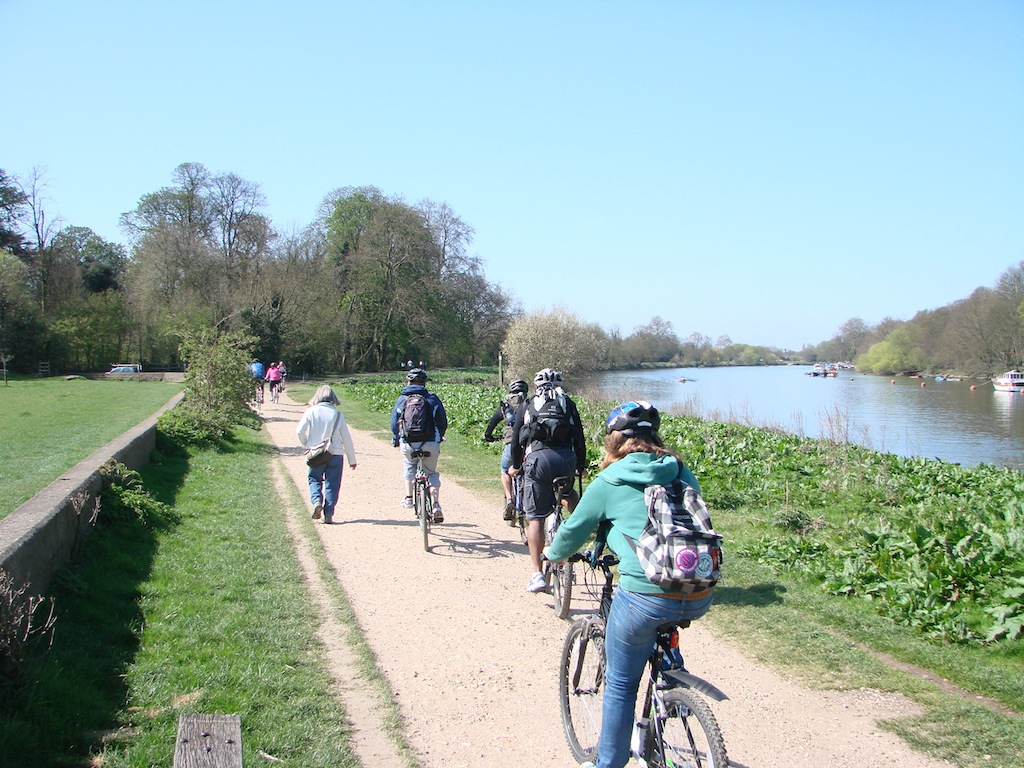 For those of us east of Brixton, a quick trip westwards to Putney makes for a super close gateway to a gorgeously rural day out. Especially if you have a bike – and have the legs for a gentle, 30-mile ride along the picturesque riverside, from Putney Embankment to Staines station.

The bit of Putney you’ll need is near the Bridge – and if you’re hiring your bike (details below) there’s a tube stop there. Or you could hop on the number 37 bus in SW2 and stroll down the (not very inspiring) high street in Putney to the river. If you are taking your own wheels, use the overground from Vauxhall; you can also rest your weary legs on the train journey back too as cycles are allowed on suburban trains.

Cycling instructor Graham Hills runs Biker’s Delight, which organises guided tours in various parts of the southeast – including one up this stretch of the Thames. So we got the lowdown from the expert. Over to you Graham:

The Thames Path is one of the UK’s National Trails; long distance routes for walking, cycling and horse riding through some of the finest landscapes in England and Wales. The route runs for 184 miles, from the source of the river in The Cotswolds to the Thames Flood Barrier. The majority of it can be cycled easily and is completely flat.

Travelling from Putney to Staines takes you along the course of the historic Oxford and Cambridge boat race, past Richmond’s swish waterfront, then onto Hampton Court. After that the riverside becomes more relaxed, with sailing clubs and village cricket pitches, before you hit your destination of Staines.

From the Putney Embankment, head west and stick to the river. The path is gravelly and busy with runners and excitable dogs, it takes you past Fulham FC’s ground and the stunning Harrods Furniture Repository, which is now apartments.

Cross the river at Hammersmith Bridge and weave your way through handsome Georgian properties, several with Blue Plaques marking previous notable inhabitants. [Number seven Hammersmith Terrace, once the home of the printer, Emery Walker, is worth slowing down for if you fancy a nose at beautifully preserved Arts and Crafts interior, while nearby Kelmscott House, built in the 1780s, was once the home of Emery’s good friend, William Morris.]

On a Sunday there is a Farmer’s Market by Dukes Meadows, a great place to stop for essential cycling provisions (thick slabs of cake!). Just before Chiswick Bridge you’ll see the finishing post to the Boat Race, painted in the university colours of light and dark blue. Up to 12,000 enthusiastic supporters used to congregate on Chiswick and Hammersmith Bridges, requiring them to be strengthened to avoid collapse.

South over Kew Bridge and you’ll pass the gates of Kew Gardens, where there are more than 30,000 species of plants. On the north side you’ll see Syon House, part of the Duke of Northumberland’s estate for the past 400 years. And there’s another farmer’s market on Richmond’s waterfront on Sundays.

The 400-year-old Ham House and the Georgian villa of Marble Hill House can be seen just outside of Richmond. And at Teddington Lock you hit the the point where the river is no longer tidal and you can watch boats working their way through gates.

Hug the river and cross Kingston Bridge, then along to the Tudor palace, Hampton Court; one-time residence of Henry VIII and home to the famous garden maze. Head south over Hampton Bridge and enjoy the four-mile ride to Walton on Thames for lunch at one of the riverside pubs.

You can either stay south and take a trip across on the Shepperton ferry, or go north over Walton bridge, leaving the river as there are styles on the footpath that prevent cycling. Head to Chertsey Bridge and pick up the river again. After a short ride past Penton Lock you will reach Staines town centre and the train station… where you can give your weary legs a rest.

This is an adapted extract from the Pedlars’ Guide to the Great Outdoors (Square Peg, £16.99), by Charlie and Caroline Gladstone (with Below the River’s editor!).