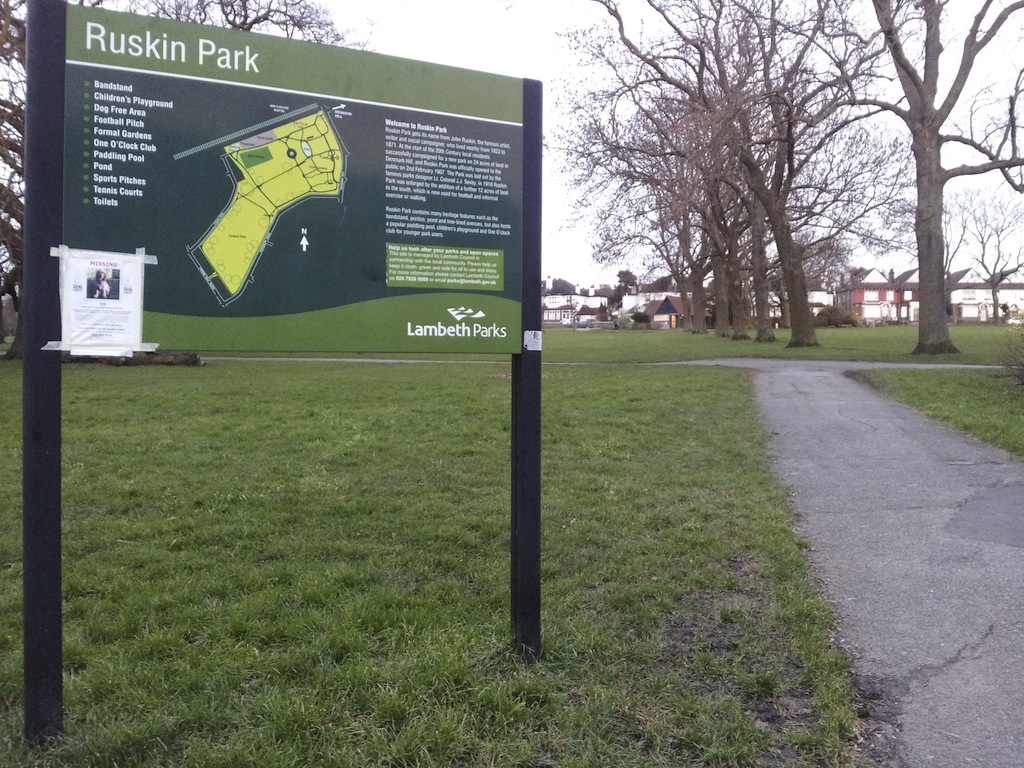 From this weekend onwards, Britain’s cinema-going public will know all about the juicily intriguing love life of the man this green space in Denmark Hill was named after. It’s a tale of Victorian familial dishonour, a celebrity love triangle and passion – as well as a publicly scandalous lack of it in the conjugal bed. The story has been the topic of numerous books, plays and scripts already, but now it’s to hit the mainstream: with actor Greg Wise leading a cast of A-listers to play Ruskin in Emma Thompson’s new film. But we’ll come back to that.

John Ruskin’s link with this lovely green space is that he lived locally for much of his life. His parents moved from Bloomsbury to settle just outside the – then – leafy village of Camberwell, in 1823. They had their only child, the four-year-old John in tow and rented a big semi on Herne Hill itself, at number 28 (see left). Ruskin, upon marrying, later moved next door to number 30 – and when his parents moved to Denmark Hill, his niece and her husband became the new neighbours. Although both houses were demolished in the early 20th century, you can see a (non blue) plaque at what is now number 26.

John Ruskin has been described as a philosopher, writer, social campaigner and artist – in fact, he was all of the above. But it was his art criticism and patronage of his hero, the painter, JMW Turner that shot him to notoriety: his influential book, Modern Painting, published in 1843, shook up the stuffy status quo of reverence for the 17th century old-school of Italian and Dutch landscape masters. That he had fans in high places helped – William Wordsworth rated Ruskin’s ideas, while Charlotte Bronte wrote of his tome: “I feel now as if I had been walking blindfold – this book seems to give me eyes.”

But let’s get back to Greg Wise and co. The actor appears as Ruskin in new film Effie Gray, written by his wife Emma Thompson with a cast list that reads like a smutty dream from the combined minds of Richard Curtis and Julian Fellowes. There’s Derek Jacobi, Julie Walters, Robbie Coltrane, Claudia Cardinale, David Suchet, Russell Tovey, James Fox…oh, and Dakota Fanning in the title role.

But why Effie Gray? Well that’s the juicy bit. (Although you may also recall the juicy accusations of plagiarism against Thompson; the release of her film has been delayed until she was cleared by a US court in 2012 of borrowing from the writers of more than one Ruskin-centric screenplay.) Effie – née Euphemia Chalmers Gray – a famed Scottish beauty and socialite, was John Ruskin’s 19-year-old bride in 1848. But the marriage was to end six years after it began, with Effie’s dramatic Easter weekend escape from the Camberwell home she shared with Ruskin, on the night train to Scotland from King’s Cross.

She had fallen in love with the John’s close friend and protégé, the prominent Pre-Raphaelite painter, John Everett Millias. Their love had blossomed during a previous trip to Scotland, where Ruskin had invited Millais to paint his portrait. He was a handsome devil, by all accounts (see actor Tom Sturridge, left, cast in that role for Thompson’s film). But it was to be proved in court that it was Ruskin’s behaviour, not just Millais’ good looks that provoked the rift. Effie claimed that Ruskin thought her mad, incapable of good motherhood and – the key issue – physically repulsive. Or, as Ruskin had it, a woman whose “person was not formed to excite passion”.

Considering the trail of admirers in Effie’s wake, including the two Austrian officers in Verona who duelled for the privilege of dancing with her, Effie was probably right to conclude that “it’s not me, it’s you” (we paraphrase).

Effie concluded that her only way out of this unaffectionate union was to brave public humiliation for herself and the Ruskin family – by citing non-consummation as grounds for divorce. You can imagine the gossip. Many have speculated that Ruskin was appalled by his wife’s pubic hair, having only seen idealised depictions of women in art before their marriage. Others concluded that a sheltered upbringing stalled Ruskin’s emotional and sexual development at pre-pubescence. There was also the publicity around Effie also having to endure the indignity of having her virginity medically proven to win the divorce. But it was, and she went on to defy Victorian gossipers to become Lady Millais when her new husband – and father of the eight children she would go on to have – was knighted for his contribution to art.

And as for her ex-husband? He went on to achieve even greater professional success, and continued to work largely from Herne Hill, though not in the erstwhile marital home. Instead he would stay with his niece and her husband at his former childhood home – apparently sleeping in the room that had once been his nursery. Perhaps that suited him perfectly.