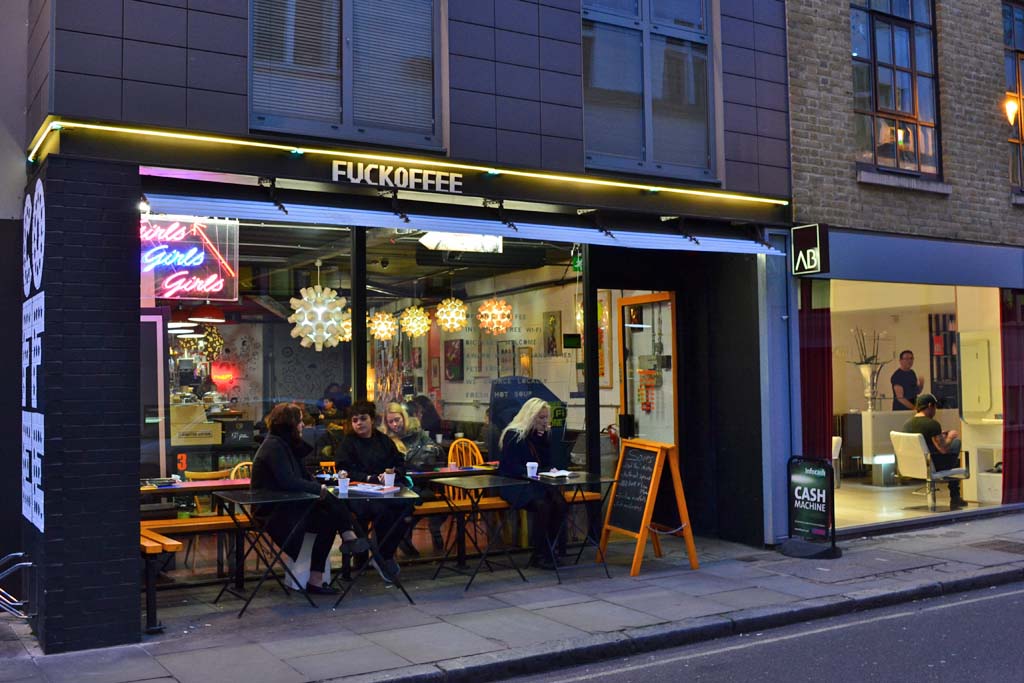 Is this the best or worst coffee shop name in London?

Just how smoothly has ‘Fuckoffee’ been going down in Bermondsey Street?

Until earlier this year, Bermondsey Street Coffee was known simply for serving up a very decent long black or flat white. Then the shop (part of the Brick Lane Coffee group, one of London’s pioneering bean peddlers since way back in the 90s) decided a bit of light infamy might be in order, too.

So they changed the name above the door to the altogether more provocative Fuckoffee, then presumably sat back and waited for the inevitable Twitter storm to percolate.

And true to form, there have been plenty of outraged morality buffs ready to engage in a bout of furious digital fist-shaking.

Only this week, a thread ignited on community noticeboard London-SE1 with calls to shield the eyes of innocent youngsters emerging from the White Cube gallery opposite from such filth, and reports that the police had paid a number of visits regarding the change of name.

On the other hand, commenter Andie Mac pointed out that kids who’ve just been to see “Gilbert & George’s poo pictures” or the current show featuring “sketches of Tracey Emin’s va-jay-jay” can probably handle a pun.

The phrase, of course, is already familiar to puerile office workers and sniggering urban dictionary devotees worldwide, the official meaning being “a hot beverage offered to co-workers that you hate, but try to get along with in sarcastic manner”. Classic usage: “Hey fellas, anyone fuckoffee?”

Amusingly though, the Twitter hashtag #FuckOffEE is currently more likely to be deployed by those ranting about poor service on their former Orange or T-Mobile phone.

But more importantly, what’s the coffee like these days? We swung by yesterday and can report the current Papua New Guinea single estate roast is excellent, with a deeply rich aroma for the nose and a smooth bitterness on the palate. We were also pleased by the ideal espresso-to-water ratio in our long blacks – no vast chalice of hot water served here.

If you can handle the scandalous nomenclature, the sweary blackboard listing drinks with names like Shit Storm, and the edgy Ebola Masks for sale at the counter, this is surely one of the best caffeine pitstops in the area. “Hey fellas, anyone fuckoffee?”

1 thought on “Is this the best or worst coffee shop name in London?”

1 thought on “Is this the best or worst coffee shop name in London?”