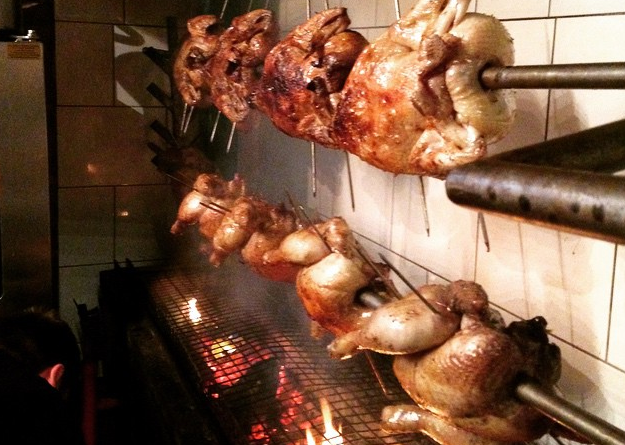 Forza is not for the faint hearted. Firstly, it took some aimless wandering around the back alleyways of the Bussey building to even find the place.

But then, nearly giving up, we stumbled upon an enthusiastic woman standing outside what looked like a factory door. When she opened the door, it was a revelation: a converted cash-and-carry filled with around eighty people sitting at long, communal tables. A win, indeed.

We were directed to the bar where we collected our satisfyingly bitter Forza 75 cocktails (similar to the French 75), then eased ourselves into the gaps between the other diners and eagerly awaited our Spring Chicken feast.

But it started a little shakily. During the first course of rabbit terrine, mostarda and sourdough, I was concerned that, because we were on the split of other groups, we’d struggle to get our money’s worth. It’s very much a serve-yourself affair so initially English reserve got the better of us, and we picked tentatively at the firm chunks of bread and terrine. When the main course – the titular chickens – were served, however, a waitress noticed our predicament and brought us an extra bird so there was more than enough to go around.

It all started to go a bit medieval at that point – legs, breast, they were all ours for the taking, with juices dribbling down our mouths. Jay Rayner had even been stabbed in the back with a carving knife by a waiter the day before (accidentally, apparently) and I can understand how things could get a bit, well, feral.

The meat was succulent (the chickens live for 100 days rather than the average 30) and was complemented perfectly by the sides of blackened leeks and fire-baked potatoes. In particular, I struggled to stop eating the tatties: they were just the right combination of moist and crispy.

I would say the biggest problem with Forza, more so than the lack of signposting, is knowing when to stop eating. This is a happy problem, of course. I could have kept on shovelling potato after potato into my pie-hole and then just rolled around on the floor and groaned a bit, like I do each Christmas. But thankfully, I didn’t.

And then the dessert arrived, a shot of rhubarb and custard which really hit the sweet spot.

The atmosphere was bright and buzzy, the staff friendly and it looked like friendships were being forged across the tables. The lack of personal space made it all feel much more sociable; we even spotted a bit of drunken dancing before we left.

As well as the cocktail, which is included in the £35 ticket price, you can buy bottles of organic wine starting from around £15. Forza’s previous incarnations as a cheese fondue haven went down a storm and I’m pleased they’ve found a permanent home in Peckham. At the time of writing, there were only a few tickets left, although if you sign up to the mailing list, they’ll tell you if they release any more.

In short? I recommend you make a beeline for this ridiculously fun banquet hall experience. I’d happily move in there if my post-carb moans didn’t put off the other diners.

This is box title
Spring Chicken at Forza Win is running until May 9. More info here or follow them on Twitter @forzawin. Find it at Unit 4.1, 133 Copeland Road SE15 3SN