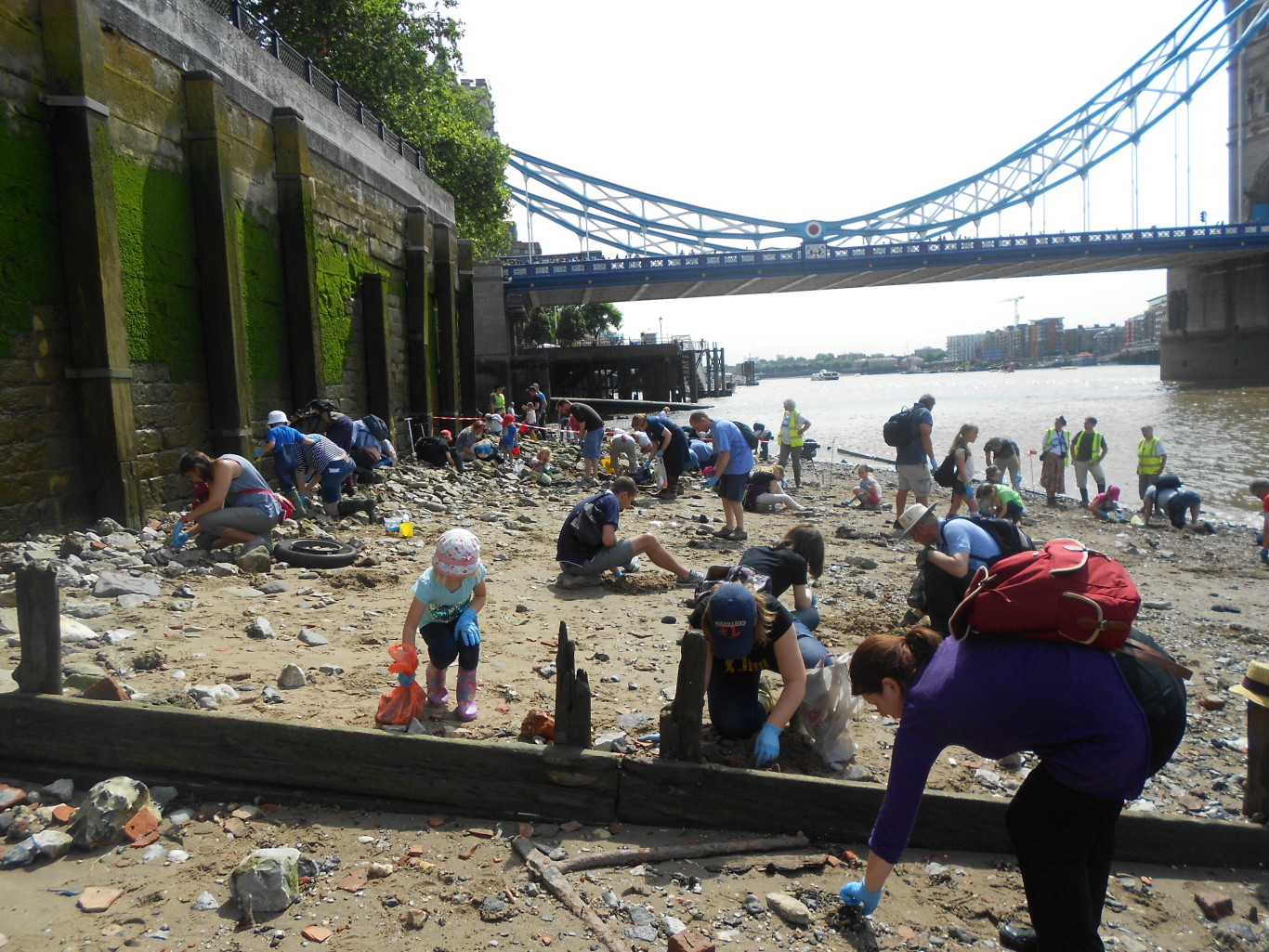 In this extract from Downstream, her new book on the history of swimming in the Thames, author Caitlin Davies takes a walk along London’s one-time Riviera

“I want to go on the beach!” a man at the top of the steps shouts to his children and I think, why? There’s nothing much to see down here.

But back in the 1930s, a little way downstream in front of the Tower of London, this was the city’s very own ‘sea side’. Here children of the East End traditionally played on the rocky foreshore at low tide, although this could be a fatal pastime.

Officially they were also trespassing on land that belonged to the Crown. When Henry III received ‘a white bear’ from King Haakon of Norway in 1252 it was reportedly given ‘a long leash’ so that it could swim in the Thames and catch fish, but in the fourteenth century Edward III issued a proclamation against bathing in the Thames near the Tower ‘on pain of death’, presumably because it bordered royal land.

The 1930s children’s beach was the brainchild of the Revd Phillip Thomas Byard Clayton, popularly known as ‘Tubby’ and a man of ‘radiant spirituality, energy, good heartedness and charm’.

On 23 July 1934 the beach was officially opened with a grand ceremony attended by the Lord Mayor, the Bishop of London and the President of the Tower Hill Improvement Fund. ‘Now,’ declared the Fund in a report entitled ‘The Great Goal’, ‘on this very spot where, in the Middle Ages the penalty for trespass was also death for man, woman or child’ there would be ‘a safe playground for little ones’. King George V had been petitioned for permission to create the beach and, in a letter read out by Lord Wakefield, he assured local children that they would ‘have this tidal playground as their own for ever’. Wakefield cut a white tape to open the beach and then, reported The Times, ‘the ladder was lowered, to the music of cheerful siren-blasts from ships in the Thames’. Children rushed down to the beach, where free ‘buns and chocolate and unlimited lemonade’ were set out on long tables laden with casks and cardboard boxes of food.

An estimated 70,000 children visited in the first year; in 1935 there were 100,000 children and adults. Most came from Stepney, others from Barking, Bermondsey, Borough, Shoreditch, Tottenham, Bethnal Green and Walthamstow. In 1936 deckchairs were introduced, as well as 200 cubic yards of ‘clean Essex sand’, which meant the beach was a little higher and so could be used for longer periods. The next year another 300 cubic yards of sand was added and on sunny bank holidays the beach was thronged with deckchairs as people sampled the delights of London’s ‘Riviera’. There were still accidents, however. Children were rescued when they got into difficulties swimming in water that was 12 feet deep, and at least two drowned near Irongate Stairs when they were swept away by the current.

In September 1939, with the outbreak of war, the beach was closed, as were other Thames bathing spots. By then it had been used by an estimated 400,000 people, such was Londoners’ love of holidaying by the Thames, even within the City. In July 1946 it reopened
with new ladders, taken from the SS Rawalpindi, and that year Pathé News filmed ‘Tower Bridge Pleasure Beach’, with ‘800 feet of beach right in the heart of London’. There was ‘plenty of good, soft sand’, to ‘build fairy castles’ or to laze on, with deckchairs ‘for mum to snooze in and dad to read the paper in’. But it had been a close call; the PLA had wanted to remove the sand, saying it interfered with shipping.

In the 1950s Tower Beach was very popular and was packed at weekends. The Thames might have been declared biologically dead, but the shore was still a social place to meet for lunch and have a singsong, and parents were still taking their children there in the late 1960s with ‘bucket and spade and sandwiches and bottles of pop’.

In 1971 the beach was closed because of cost, pollution and safety fears, and it stayed shut as ‘an anti-terrorist measure’. In the end London children didn’t get the tidal playground for ever as promised by the King in 1934, but such is the pull of the Thames that we’ve found new ways to use the foreshore.

With increasing interest in the shore as an environmental and archaeological resource, the Tower Beach is now open for two days a year with free activities organised by Historic Royal Palaces, COLAS and Thames 21. The weekend is intended mainly for children, but anyone can search for treasures washed up or buried on the shore.

The stairs are steep and wet but I manage not to slip, and then I start walking along the beach, with no idea what I’m looking for. There is something dreamy about looking down on stones, strolling on a hot day by the Thames in central London, right at river level for once. I try to conjure up what it would have been like here in the 1930s at the city’s Riviera, with deckchairs and sandcastle competitions, toffee apples and unlimited lemonade.

The beach is busy now; everywhere is the sound of people scraping in the sand, kids filling up buckets with stones and bones. Volunteers have set up a table with pictures of animal skeletons; I hand over a bone and am told it’s a sheep’s metatarsal. Next I present a piece of pipe; it has quite a big central hole so that makes it nineteenth-century, then a green bit of pottery which I’m told is a piece of border ware from Surrey or Hampshire made in the sixteenth or seventeenth century, and would have been used for cooking or storing food. By now my arms are aching with all my treasures, the heat is overwhelming and it’s time to make way for the children behind me queuing at the information table, some with bones as big as their hands.

It’s clear that the reopening of the children’s beach at Tower Bridge, even for just one weekend a year, has been a great success, giving us free access to an area we want to explore. Other places could follow, with recent calls for a year-round beach on the Thames.

This is extracted from Downstream (Aurum Press, £16.99) by Caitlin Davies, available in bookshops now. The beach will be open in 2015 on Saturday 18th and Sunday 19th July. More info here