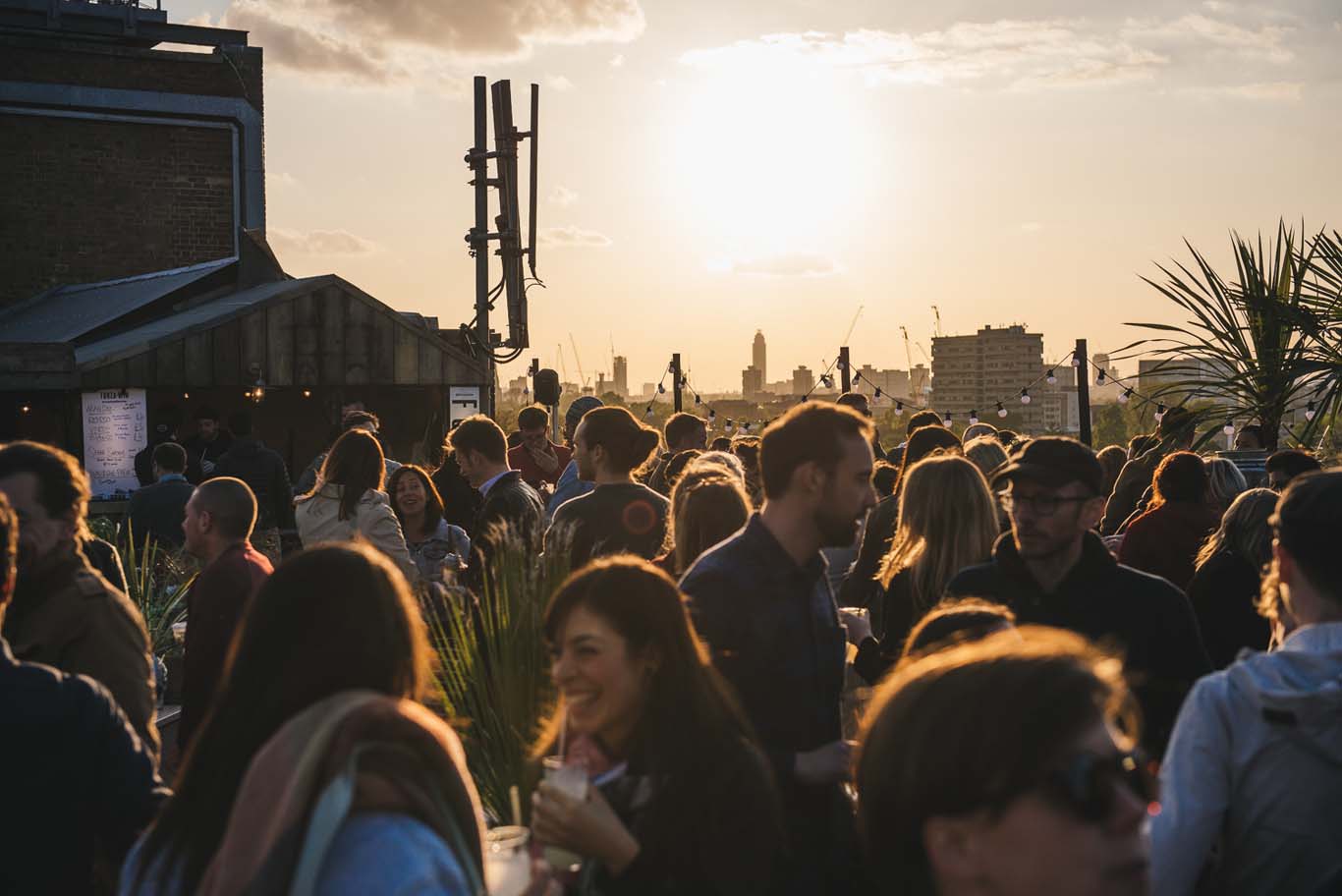 Peckham 2016, with the lure of its thriving nightlife, edgy arts spaces and bustling dive bars, is well placed for a musical mystery crawl.

And, while stumbling between a leftfield pub DJ set and a rooftop burger pop-up is now standard stuff in these parts, the neighbourhood had yet to experience the kind of wristband-me-up-pass-me-a-plastic-cup-of-lager-I’m-going-in-deep delights of its very own, homegrown multi-venue music event.

The time is clearly right. And so, from within this creative hotbed duly emerges the first Peckham Rye Music Festival, to celebrate the exciting party spirit that pervades Rye Lane after dark.

For a three day event, everything seems very concentrated on the big Saturday night, with educational sessions on Friday and slimmed-down Sunday recovery sessions.

This condensed format actually suits us fine as we roll up to the Copeland Park complex mid-afternoon, wending our way through the excitable groups getting stuck in to cocktails in the sunshine.

Lawrence is playing a live set of suitably lush summertime electronica inside, but it’s tough competing with one of the first outdoor drinking ops of the summer, so the real good times vibes are out in the car-park-cum-terrace.

As the power of the sun starts to fade, we move down the road to The White Horse, billed as a vinyl-only destination for the weekend. Noise of Art founder Ben Osborne is wielding the 7”s, steadily morphing the crowd from the regular daytime geezers perched on stools when we arrive, to the more animated – and vocal – clusters of ravers as the evening takes hold.

The pursuit of stomach-steeling streetfood leads us back to the Copeland Park complex, although it appears the sunshine cocktail crew got hungry and have ravaged most of the options.

Food certainly feels like a festival teething problem: service at bar-room hangout The Nines struggles to cope, a trip up to the panoramic roof of the Bussey reveals they have sold out of everything, and back down in the basement at Rye Wax, Taco Queen also seems to have gone home, (the busy Voodoo Down records showcase is bumping along nicely amongst the racks of tunes though).

So we strike out for The Gowlett, a pub that’s home to some infamous pizzas, and features a decent DJ line-up tonight – and the rest of the year too, in fact. Despite its more residential setting, this popular boozer’s sizable rooms are heaving. There’s a cheeky, carefree atmosphere amidst the wood panels and gently swaying overbar lighting, reminiscent of the Space Ibiza terrace.

The barmaid informs us the pizzas will be a fairly astonishing hour long wait, so we sup a couple of pints and enjoy Monologues Records man Ben Gomori whipping up the festi-vibes with some disco-tinged house bombs.

When it does finally arrive, the pizza lives up to the hype, with ultra-crisp bases and top quality toppings. Our favourite? The house special Gowlettini, with plump roasted pine nuts covering lashings of prosciutto and rocket.

Recharged, we zig-zag a swervy passage back up Rye Lane, dipping into the mayhem set amongst the 80s arcade game consoles at the Four Quarters, then settling for the afro-infused grooves being dropped by local scene champ, Do!! You!!! Records Charlie Bones, over at Canavan’s.

With Saturday night’s brightly lit pool hall games in full swing alongside the party, it proves a suitably quirky showcase for the delights of nocturnal SE15, to visitors and seasoned regulars alike, who are by now all rubbing shoulders in front of the speakers.

Back at the Bussey we reconnect with some party people who haven’t been quite as adventurous as our bunch, admitting they haven’t ventured beyond the warehouse complex since arriving some eight hours previous.

But that’s not as crazy lazy as it sounds, since this is certainly the epicentre of the festival action, particularly as proceedings are now stretching out into the early hours.

Happily, we stumble upon Hesseltime kicking up deep clouds of DJ dust in the vaguely ‘secret’ back room. The lighting is perhaps a touch bright for the state of repair of the crowd by this point, but it proves a great dancefloor upon which to throw a few ridiculous shapes, regardless.

Despite the inevitable odd hitches that characterise any event’s inaugural year (getting ‘bounced’ by security for carrying drinks between venues was one of our little bugbears), we were left with a bright and positive feeling about the first PRMF. We hope to see it back – and flourishing – again for 2017 and beyond.

More info on this year’s event at: peckhamryemusicfestival.co.uk