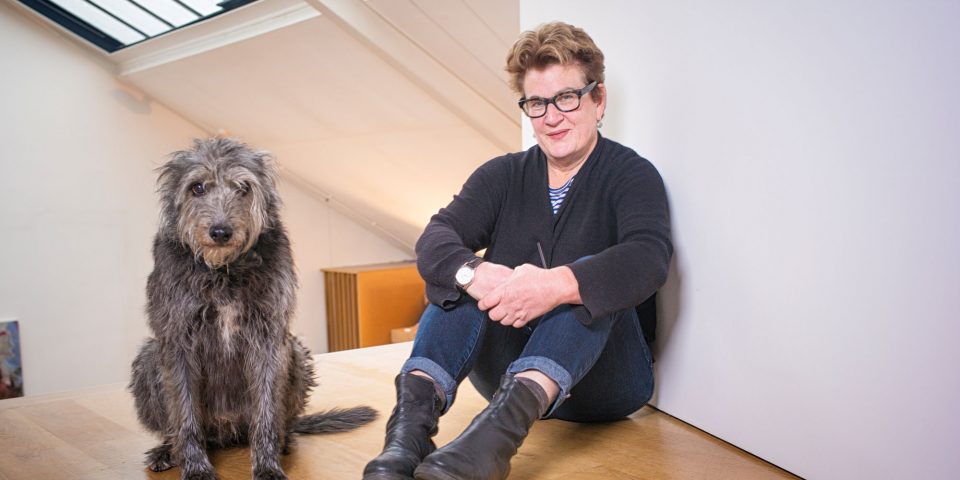 ‘I fell in love with the Old Kent Road’: an interview with Meg Rosoff

Excellent news, for sure; however, it is her first novel for adults, Jonathan Unleashed – a love letter to canine charisma and youthful uncertainty – which was published most recently, delighting critics and readers throughout the world.

The book has it all: a pair of possibly prophetic dogs, and a millennial struggling to navigate a live-streamed world without depth, whilst falling for his work colleague and mentor of indeterminate gender.

Jonathan, a 20-something New Yorker, feels lost in life, love, and work, but is helped (or possibly hindered) by his two newly-acquired charges, a border collie Dante and spaniel Sissy.

It’s no surprise that Rosoff sympathises with her main character. “He is me really, so I was completely sympathetic to his lack of direction. I was clueless about the world for decades. He has a quicker deliverance than I did.”

Like her protagonist, who finds the advertising industry in which he works baffling and ridiculous, Meg honed her writing skills through crafting straplines.

“Initially I wasn’t interested in being a writer,” she says. “My dad was a doctor and mum a social worker, but I was always good at writing and it came spontaneously to me. I just assumed everyone could write and didn’t know otherwise for many years.

“So I stumbled into advertising, because my former boss from The New York Times offered me a job and it was three times more than I got at the newspaper,” she says. “It’s the type of thing you do when you’re young and don’t think about it. It was very glamorous and not many women did it.”

Then she moved to London and married a painter. “He wasn’t making that much money, so I ended up doing advertising for 15 years.”

Meg describes the experience as “an apprenticeship for writing fiction” and describes the increasingly popular writing MAs as shortcuts in terms of the experience. “If you’re going to be shoemaker then for five years you do nothing but keep the fires going. The first thing you learn in PR and advertising is no one wants to read what you’ve written, so this is good training for books. Also never use four words when one will do.”

However she’s pleased to have finished the advertising chapter in her life. “Most the time I pretty much hated it. It was completely soul destroying. I got fired a lot and kept wanting to do something else but never got round to it.”

What changed? “My sister died of cancer, and I thought, ‘I’m going to try writing a novel and if I fail at least I would have tried’.”

Meg wrote How I Live Now in 2004 about an American teenager sent to live with relatives during a mysterious war – which sold over one million copies – followed by another six young adult books.

Despite her success, the 59-year-old still suffers doubts over her writing, but enjoys the unpredictable process of creating fiction. “From advertising I learned to internalise a dramatic arc so even though I don’t plan books I have a vague sense of where they are going. I can’t plot, instead I start with one line – I woke up with the first line of Jonathan Unleashed.

Every time Rosoff finishes a book she thinks that might be the last one she’ll complete. “I’ve written seven books in 15 years. Unless you are someone like Zoella to have a career you just have to keep doing it.”

Like the ponderous Jonathan, Meg has two canine companions, a pair of lurchers, although when asked if they were inspiration for Dante and Sissy she says that “neither of my dogs are terribly intelligent. I shouldn’t say that in front of them but it’s true.”

Rosoff walks her dogs in Burgess Park and is enjoying the greenery of south-east London, rather than pining for the glossiness of her hometown: “I never really missed New York after going to London – I found it obsessed with speed and money. London is more congenial. You can be shabby here whereas New York is more about getting your legs waxed.”

She moved from Highbury to south London last year having enjoyed a brief dalliance with Deptford at the end of eighties. She stumbled across a photographer’s loft online which reminded her of New York apartments she had always craved. “I was getting bored of north London,” she says. “There were all these bankers moving to Highbury and I missed the edgy, exciting city. Then I found this place between Borough and Elephant and Castle and fell in love.”

The loft is, she says, “completely impractical” because there’s no garden for the dogs and not much in the way of rooms, but she became completely obsessed. “I’ve been getting it renovated the last few months.”

Meg is enjoying getting to know a new area with her artist husband and their 18-year-old daughter. “South London feels cooler,” she says. “It takes years before you get new haunts and friends in a place, and I’m right at the beginning of that journey. For example, I’m really enjoying Lidl on the Old Kent Road at the moment.”

And what may have started as a cash-saving exercise has now become a love affair: “One of the reasons I moved here was my original publisher, Penguin, turned Jonathan Unleashed down and I thought no one would buy it and financially it would make sense to move south.”

They didn’t want it because it wasn’t a children’s book. “But then six different publishers bid on it – there were people calling up for it when we hadn’t even sent it to them. It was one of those funny bits of fate.”


• I go to Burgess Park in the mornings. I have to drive there which is a pain but my dogs love it because they can swim in the lake and there’s a great café.
• Fowlds café in Addlington Square is in an old upholsters’ workshop and it’s great.
• I go to Southbank a lot and the BFI, or I pay a fiver for an afternoon matinee at The Globe.
• I love Goldsmiths Pub and Dining Room on South Bridge Road – a block from my house and they take dogs in there.
• I’m a fan of Tempo on Borough High Street – they do cakes, coffee and repair bikes.
• Locanda del Melo in Long Lane which is a restaurant and a deli, is really tiny, it’s unbelievable.
• I absolutely love going to Greenwich Park, it’s so beautiful and Sydenham Woods is next on my list.
• I really like the car wash guy on the Old Kent Road – I have the dirtiest car in the world.