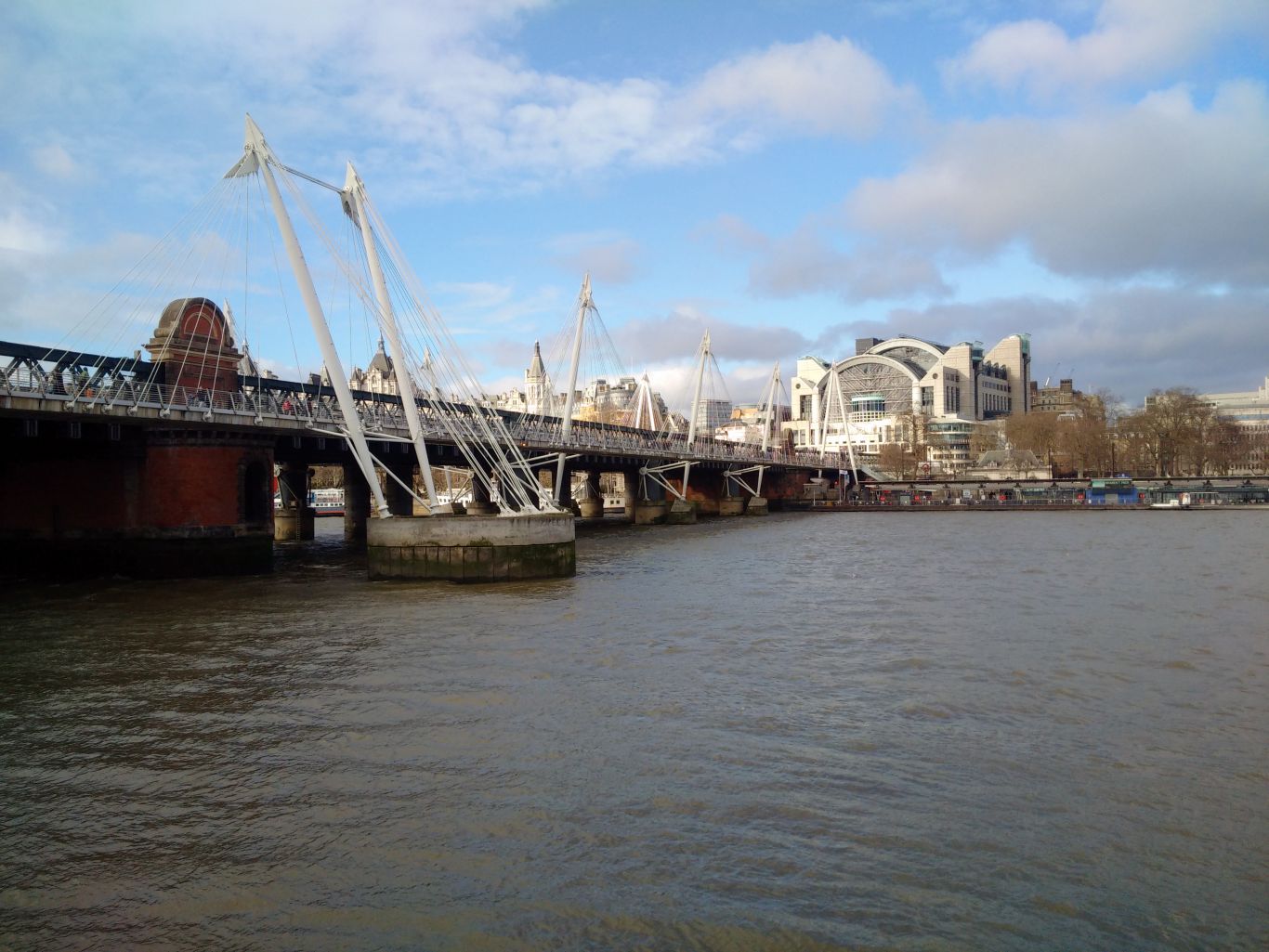 When I first moved to London, in 2000, I found it hard to understand the rivalry between north and south Londoners. A friend was spun into a tortuous state of indecision over whether to move from the north he’d been brought up in to the other side of the river. Years later another friend announced – after months of Hamlet-like indecision – that he was, after all, making the move to the north of the Thames. Fifteen years later I understand it. This tension between the two sides of the river is stitched into the history’s fabric and is as real as the division of the river itself.

The south is the viewing platform to the north but until the 1950s was very much below the built-up platform of the opposite bank. The development of the south was initially opposed with vitriol from those on the other side. When Westminster Bridge was proposed in the mid-eighteenth century (to be the second central bridge after Waterloo) city bankers feared it would take away their business; the bridge itself was sabotaged by the watermen who feared that their diminishing incomes would be wiped-out by the new option to hoof across the water using the bridge.

To reinforce this sense of the north as overseer to the south, many of London’s prisons have been established on the South Bank. When the Fleet Prison was burned down in 1666 it was temporarily relocated to Caron House in Lambeth.

The King’s Bench Prison had also been close to St George’s Fields. One of its inmates was the dramatist and London prose writer Thomas Dekker, who was imprisoned there for not paying a debt of £40 to the father of fellow playwright John Webster – a reminder that poets should never involve themselves in the business of money. Marshalsea Prison, where Charles Dickens’ father John was imprisoned for debt – and which influenced his son’s novel Little Dorrit – was in Southwark. Within and around the South Bank both liberty and incarceration have existed in a very close, symbiotic relationship – like the bear that is baited by the human hand.

Perhaps I’ve felt kinship with the south of London because its reputation has always been one projected onto it from the other side – from the vantage of class and money – which reminds me of my home city, Liverpool. Stereotype and discrimination have pervaded the south. Charles Booth, in Life and Labour of the London Poor – a series of surveys undertaken between 1886 and 1903 – found that the worst areas of poverty were in the riverside parts of south London, particularly between Borough and Blackfriars Road.

In the early nineteenth century Bethlehem Hospital for mental patients was relocated to St George’s Fields to its current site which houses the Imperial War Museum. The area had also housed the Lambeth Asylum for Orphaned Girls and Hanway’s Magdalen House for ‘penitent prostitutes’. All of the city’s broken children were coming home at once. I have met many people – and no shortage of poets – who, in the extremities of mental strife, have felt most able to be themselves, or at least publicly dissolve, on the South Bank. In the 1930s the poet David Gascoyne, torn with mental strife, walked the area of a night time.

In the 1950s boys from Southwark and Lambeth took to wearing exaggerated Edwardian style dress including ‘very long velvet-collared jackets, bootlace ties, tapered trousers, suede shoes with thick crepe souls, and elaborate Brylcreemed quiffs, instead of the cloth caps and second-hand clothes they would have worn a few years earlier.’

Teddy Boys hung around the area edges of the South Bank – at Vauxhall and Elephant & Castle – like revenants of the Jacobean playwrights in their ruffs and tight trousers: ‘comical and slightly menacing’. There was, however – as T.R. Fyvel points out – a ‘peculiar, nasty viciousness in Teddy Boy assaults.’ The real threat of Teddy Boys was no doubt exaggerated by the media and through urban myth, but it is telling that the surrounding South Bank became the playground for this.

Forty years later, in the 1990s, both Lambeth and Southwark were amongst the areas of England with the highest unemployment levels; many of these people were men between twenty and thirty-four, and Afro-Caribbean. There is a long history of London’s young men finding themselves rooted and displaced here.

My book, published this month, takes up the spirit of outsiderness that this history invites and, through doing so, offers walks and detours into the current reality of London’s South Bank. When the Situationist writer Guy Debord developed the idea of psychogeography he argued that cities have atmospheres and environments that we can experience through the dérive: the drift. This term is often overused today, and with little reference to its genesis. We could do a lot worse before setting off than listening to what Debord said about this in his ‘Theory of the Dérive’ written in 1956:

‘Dérive … a technique of transient passage through varied ambiances. The dérive entails playful-constructive behaviour and awareness of psychogeographical effects; which completely distinguishes it from the classical notions of the journey and the stroll. Wandering in subterranean catacombs forbidden to the public etc – are expressions of a more general sensibility which is nothing other than the dérive. Written descriptions can be no more than passwords to this great game.’

I have always felt that there is something missing in this argument: that we all bring with us that which we wish to seek. You will no doubt find aspects of South Bank that you relate to in your own way and in my book bring my own guides from the past to help navigate the current atmospherics of the area. These are my ghosts, those I wish to see and hear: spoors of atomised DNA that give us the city’s codes through their remaining words. These are guides that I can follow with confidence because I truly believe in them. They will offer only the most revealing passwords to this landscape – a landscape that I’ve walked through, thought in, and become lost within over the past fourteen years. I’ve made friends here, walked with people now dead and made life-changing personal discoveries. The South Bank has become a part of who I am, or more to the point: has been a place that has allowed me to become.

Over a decade ago Peter Ackroyd wrote that south London ‘has been underdeveloped in past centuries, but this neglect has allowed it effortlessly to reinvent itself.’

He writes that, compared to London’s north, ‘the relatively underdeveloped tracts south of the Thames are in contrast available for a spirited and imaginative transformation.’

At the time of writing this transformation is taking place at an accelerated pace and often with the danger of rational forces – to use the language of Blake – overpowering the imaginative ones. Ackroyd is right that this part of London is one of the ‘most vigorous and varied, not to say popular’ of current London, but as further corporatisation takes effect the South Bank should preserve a balance between sudden dead-ends, open space and temporary structures – amidst the need to build and develop new places for people to live. When all the possibilities are used up the area will cease to inspire the imagination.

In his book Urban Theory, A Critical Assessment, John Rennie Short offers five possible kinds of future city: The Vulnerable City, The Globalising City, Liquid City, The City of Light and Dark and The Contaminated City. He argues that we are midway through a third urban revolution (the first being the building of the mega-industrialised cities of the nineteenth century, and the second being the emergence of the postmodern city, based not on industry but on the collection of information and knowledge and the production of commodities) that is changing city landscapes. It is the description of The Liquid City which best describes the South Bank’s fluid, sprawling landscape and geographic and cultural resistance to being bound at its edges and easily understood as a place:

‘Metropolitan growth has a liquid quality; it is constantly moving over the landscape, here in torrents, there in rivulets, elsewhere in steady drips, but always in the viscous manner of a semisolid, semiliquid, half-permanent, yet constantly changing phenomenon. Metropolitan growth possesses an unstable quality that flows over political boundaries, seeps across borders and transcends tight spatial demarcation; it is a process not a culmination, always in motion, rarely at rest …Fixity and flow in a constant dialectic as flows produce new places of fixed investment and concentration that in turn are undermined by new flows. Structure and process, solid and liquid, stasis and flow in a constant interconnected reality. The term liquid is used to highlight the more dynamic element of the dialectic.’

Later, Denys Lasdun – architect of the National Theatre – said that he wanted to create the feeling that ‘the audience – like the tides of the river – flow into the auditoriums. Then the tide ebbs and they come out into the creeks of the small spaces that are made by all these terraces.’

These flows and ebbing tides will lead us where they will.