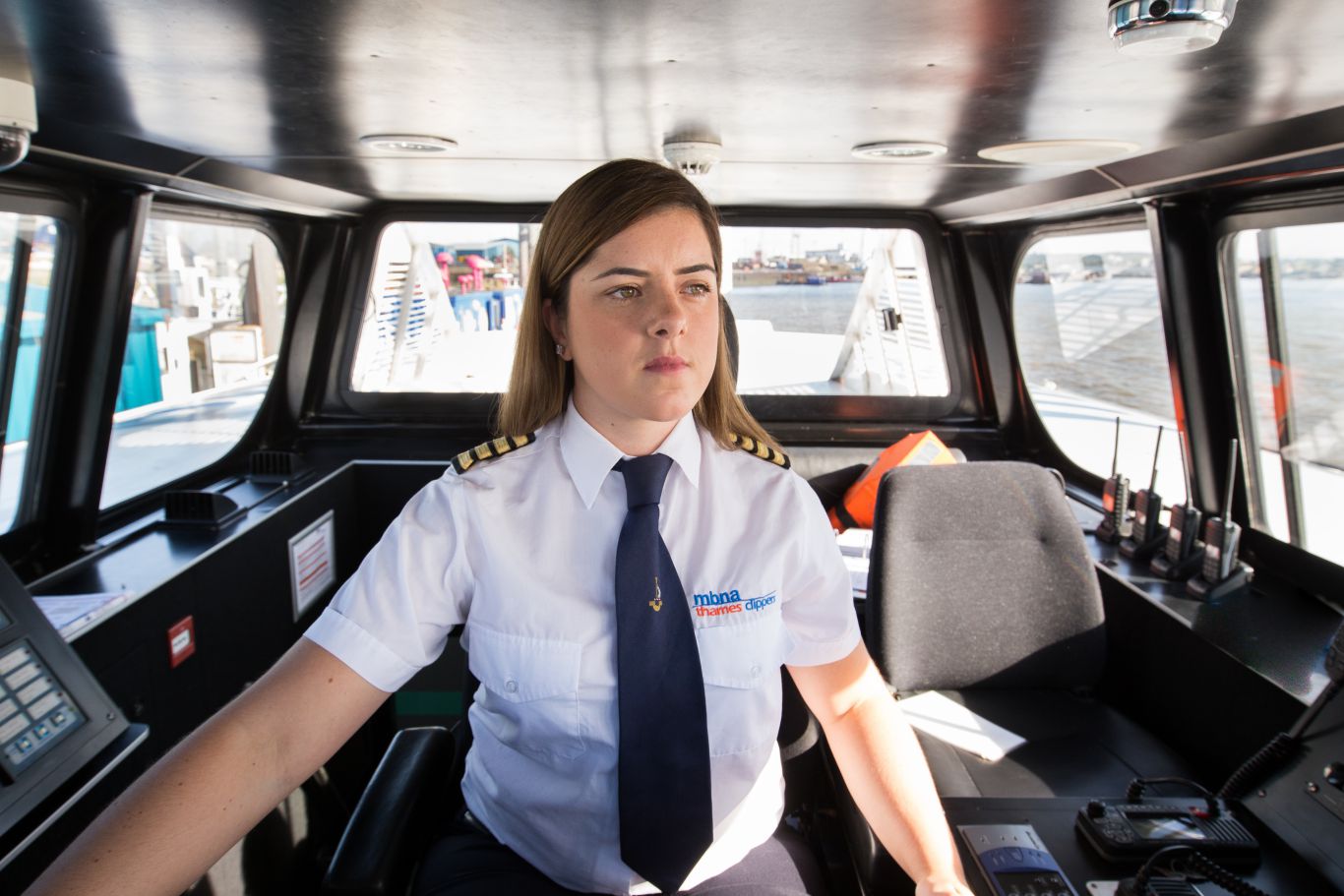 While strolling along the Thames, you can’t help but notice the fleet of MBNA Clippers speeding up and down the river. Renowned for being the fastest and most frequent service on the Thames, the boats deliver excitable tourists and suited ‘n’ booted commuters to the newly developed and developing areas along the banks. We caught up with Captain Joy McGlinchey, 25, currently the only female captain working on the river, who tells us in her own words about her journey up the ranks, female representation in her profession and the success of an on-going scheme to clean up the Thames.

• Other than some kayaking when I was younger, I hadn’t spent much time on the water. I studied medical science, art and media at A-Level – a bit of a mish-mash of topics and definitely nothing to do with my current career. In 2008 my dad opened his own river boat company which I would help out on. From there, I found out about Clipper, and the rest, as they say, is history. I worked my way up through the ranks from deckhand to captain. Clipper has a really good training programme: regardless of qualifications and prior experience you can embark on an interesting and rewarding career. I effectively went from helping out on my dad’s twelve-passenger boat to driving passenger boats of 60, 140 and 220 people.

• Getting my boating license was a lot of hard work and the training was very intense. I am really lucky though because every member of the crew was so helpful. They would go out of their way to pass on their knowledge and share their expertise. Although I’m a captain now, I’m still one of the youngest and least experienced. Everyone is still as willing to give me advice and show me the ropes, and I am just as willing to extract their knowledge! I’ve worked with everyone on the Clipper crew, and we’re like a little family.

• There are still more men on the river, but that is definitely changing. When I was 15 years old, I read an article about female crews on the Thames. Seeing that there were other women working on the water encouraged me to do it too. It is all about representation and awareness really, I hadn’t considered that there were jobs on the river full stop, let alone jobs for women. In such a typically male-dominated industry, it is really good to see that the ratios are changing. I may be the only female captain at the moment but there are now about ten other women working their way up the ranks in the Clipper team.

• The Thames is a bustling place these days. The Thames Vision project is a 20-year development plan that is attempting to make greater use of the river, encouraging both freight and recreation. It is certainly fulfilling its brief; there’s so much more activity and life on the river and it is great to see. With so much development going on in the areas surrounding the Thames, the scheme is trying to increase the number of people who travel on and enjoy this vital waterway. It is a bit of a renaissance in terms of the river – amplifying a resource that is already there.

• Despite the increase in people using the river, the water is noticeably cleaner. This is due to a combination of strict regulations and raising awareness. There are driftwood collectors dotted along the banks, adverts telling people to stop littering, numerous guidelines and procedures, as well as emergency response teams on hand to tackle things like oil spills. It’s nice to see such a pro-active effort to keep the Thames, which is such a vital part of our city, clean.
This is box title
Find out more about the river bus service here