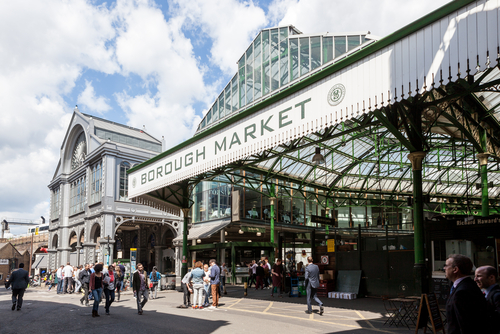 “While the victims of last week’s terror attack will never be forgotten,”says the Market’s Donald Hyslop, “and while the trauma experienced by the Borough Market and wider London community will weigh heavily for a long time to come, it is essentially for the wellbeing of everyone associated that we return to at least a semblance of normality as soon as we can.”

He says Borough has been flooded with messages and offers of help. “Traders, customers, staff and trustees have done whatever they can, from the local artist who donated works of art inspired by the Market’s produce to help the Red Cross UK Solidarity Fund, to traders such as Horn OK Please and Borough Wines who used their presence at other markets to raise money for the fund.”

Gourmet Goat is planning to give away pots of koliva, a dish of wheat berries, spices and mint that is loaded with symbolism in the eastern Mediterranean, in exchange for a donation. And Arabica Bar & Kitchen will be adding the “aptly named” London Courage to the cocktail menu (a Levantine take on a traditional Tom Collins), and will donate £1 per drink served to the Borough Market Relief Fund, set up to support the independent businesses at risk. So far it’s raised 35k.

On Friday morning, London-based florists, flower growers and greengrocers will join together to create an installation of flowers and fresh produce around the main Art Deco entrance on Borough High Street.

“The strength of this community has been sorely tested over the past ten days, and it has shown itself to be rock solid,” says Hyslop. “The Market’s staff have worked around the clock and through the weekend, in circumstances of both logistical challenge and emotional strain, in an attempt to get the place ready for its reopening.”

Anyone else who wishes to help in the coming weeks can do so in one simple “but fundamental” way, he says: “by turning up, putting a buzz back into the atmosphere, and buying some high-quality food and drink from the fantastic array of traders who make this such a special place.

At 10am on June 14th, all traders will link arms, and pause for a moment of silent reflection. Then the Market bell will ring.

This is box title
Borough Market is open Monday-Saturdays at 8 Southwark Street, SE1. It’s also open on Sundays for the next two weeks to help traders.