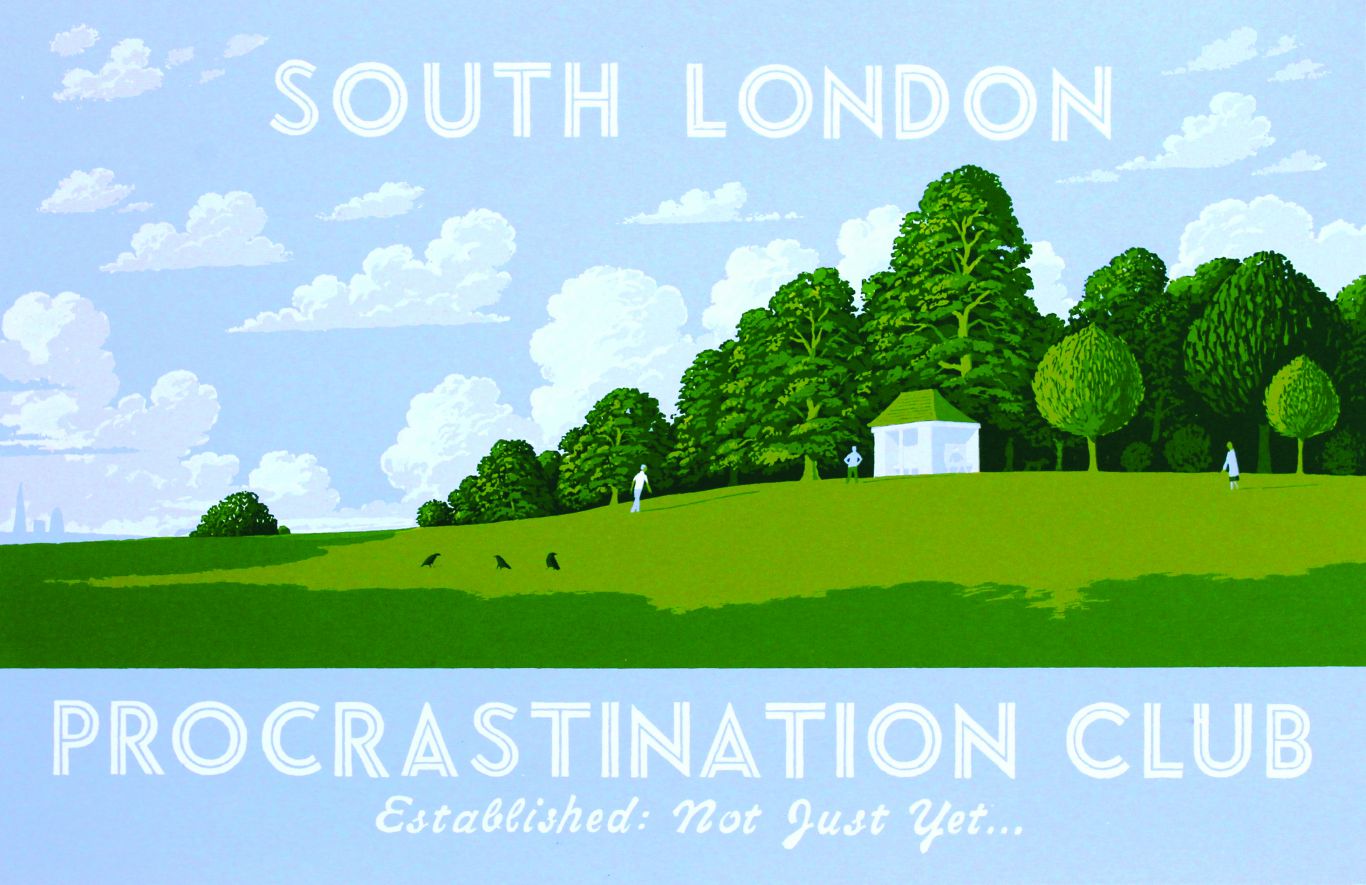 After finishing at the Royal Academy back in the eighties, Martin Grover has been plying his trade ever since. An enthusiastic screen printer, he paints directly onto the screen, eschewing photographic and digital processes. “The prints can be quite simple or richly layered,” he says. “They mainly capture local cityscapes and greens, as well as more haunting and melancholic pieces based on songs, anecdotes and poems.”

Others reveal a wry and playful humour – as you can see throughout this feature. We tracked him down after enjoying his work at this year’s Affordable Art Fair on the Heath.

So what’s the story behind the Procrastination Clubs?
Like many people I have a predisposition towards procrastination, the art of doing something while avoiding the main issue. The South London Procrastination Club started out as the title for a show a few years ago. I did an illustration of a favourite hut in Brockwell Park (somewhere I imagined would be a sort of HQ for procrastinators) for a poster to advertise the exhibition. Anyway, both the image and title seemed to strike a chord, and I decided to produce a limited edition 5/6 colour screen print – and thus the SLPC became almost an official organization.

It seemed unfair to leave north London out. Hampstead Heath, Parliament Hill and its views were an obvious choice as an image. West London followed, although I’m still procrastinating about the East End version. I am sure one day they will all be unified but let’s not get ahead of ourselves.

Oh, and a New York Procrastinators’ print, produced for an art fair in the city a few years ago, fell rather flat on its face. New Yorkers I came to realise DO NOT procrastinate – or at least will not admit to it.

Tell us about the bus stop signs.
Once again these have their genesis in an invite for an exhibition. Using the template of the iconic London Bus Stop to give information about a show gave me the idea to take it a little further. The bus stop as a piece of utilitarian furniture tells us where we are, where we might go and roughly how long it will take to get there. I started to think of these journeys as being more personal and individual, part of a rich fabric of life.

So I began playing around with place names, puns, song, book, film and poem titles and turns of phrase. Instead of numbers the little bus stop panels would indicate or reflect various states of mind. What was initially a one-off print, the series, loosely titled Life in the Bus Lane, continues today thirteen years on from that original print.

As well as the screen prints I started to make my own wall mounted 3D bus stops, some the size of paperback books, others almost full size. I think it peaked a few years ago when I was asked to produce a temporary stop (below) to go in West Norwood Cemetery as part of The Curious exhibition, curated by Jane Millar, in which twenty artists created site-specific pieces.

We especially like the ‘last’ grocers in West Norwood (see below). What inspires you most about your area?
Having moved to Brixton in 1987, and having a studio in West Norwood since 1995, these two areas provide a fecund and ever-changing source of inspiration. I can’t honestly say if these places are better than others, I think I’d be just as inspired if I had settled in any part of the capital. I like representing and celebrating mundane areas as well as the more obvious civic buildings and parks.

‘Last General Grocers in West Norwood’ is a perfect example of that, and reflects the larger scale more detailed canvases I produce. Mr Khan outside his General Grocers aims to capture the everyday, and also document a place that is starting to disappear, as the persistent and inevitable growth of London impacts on areas that until five or six years ago would have been anonymous and less desirable parts of the city.
This is box title
See the North London Procrastination Club on our sister site Kentishtowner. Martin Grover is taking part in Urban Art, which sees 200 artists exhibiting a wide range of work on Josephine Ave, Brixton SW2, 8th-9th July. More info here or to buy his work visit Grover’s website