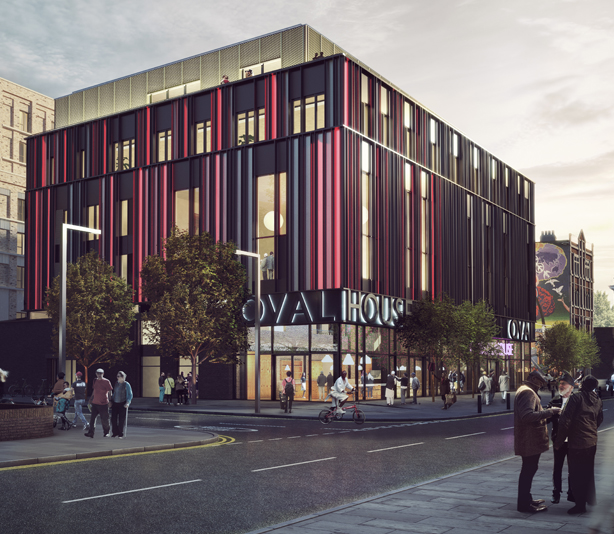 Leaving their current small-scale space in Oval, the acclaimed SE11 theatre is, as some of you will know, moving to a much larger venue in Brixton.

This move has been underway for the past couple of years, but thanks to a hefty £3 million financial injection from The Arts Council, Ovalhouse are now several steps closer to their opening in late 2019 (doesn’t that still seem aeons away?). It seems like the stars are aligning too as they’ve simultaneously secured an offer as a National Portfolio Organisation, the grant for which will begin next year.

The financial boost means that the company can build a range of activities towards the opening of the new building as the plan is to ‘arrive and thrive.’ The new venue, designed by Foster Wilson Architects, will host seven rehearsal studios and two studio theatres. These will be situated alongside a large foyer with a café and bar. The new theatre-complex will also be fully wheelchair accessible and built to a high sustainable standard.

Running for 50 years, Ovalhouse has most certainly gained itself a name as an open and inclusive hub providing a home for experimental, radical and overlooked artists seeking to make theatre and performance that speaks to a world beyond the mainstream.

The theatre has certainly had a good run in Oval: its alumni includes Paulette Randall, the first black woman to take a show into the West End;  Sanjeev Bhaskar, commissioned by the BBC after a small show upstairs at Ovalhouse; and Pierce Brosnan, who discovered his love of acting in the Youth Theatres and gave his first performance there.

Considering the theatre’s continued commitment to the development of diverse artists and young people, the move to Brixton and the creation of this ambitious new space is, according to Joyce Wilson from the Arts Council, “a strong opportunity to create a cultural hub in south London.”

Meanwhile, at the current Ovalhouse…

The theatrical offerings haven’t, of course, ebbed with the coming relocation: and Ovalhouse have just announced their thought-provoking autumn season. With their focus placed on giving a voice to those less heard, four bold new plays will look to examine underexplored issues within our society.

As such, Glue attempts to reveal the truth about growing up in care, The Secret Keeper asks why those who keep our secrets are always destroyed by them, Nikah looks at forced marriage from the male Pakistani perspective while The Sex Workers Opera explores the world of the sex trade. More info on their move and listings here.