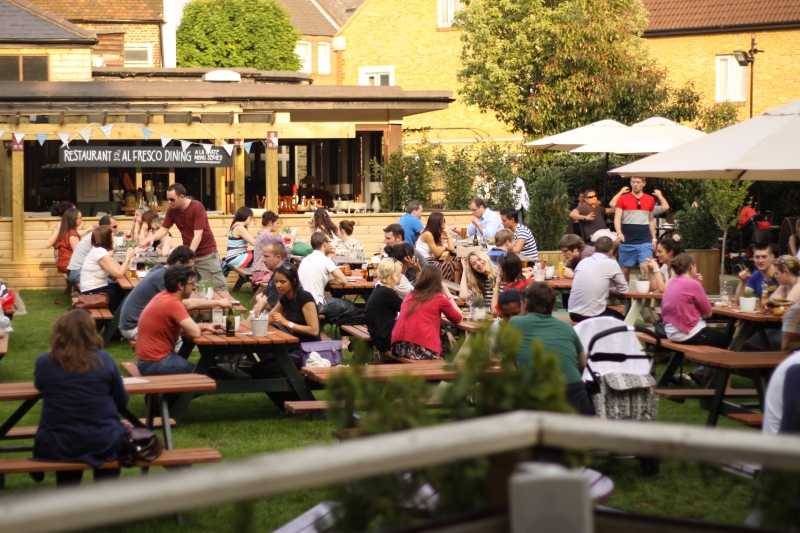 “Earlsfield? Where the fuck is that?” These were the words uttered by a random person I was chatting to at a boozy networking event recently, when the inevitable topic of where we live in London came up in conversation.

They weren’t alone, though. After living in Earlsfield for almost six months, I’ve rarely met anyone who knows where it is – often it’s only those who commute on the overground that know. However, sandwiched between well-known neighbourhoods – Balham and Clapham to the east, Battersea and Putney to the north, Tooting and Wimbledon to the south – Earlsfield is arguably south London’s dark horse. Arguably.

I’m not going to lie, the neighbourhood’s beating heart – Garratt Lane – lacks the “hip” factor found in other south London hotspots, but I can assure you it’s an area worth visiting. Here’s why:

As a shameless coffee snob – I am Australian, after all – my heart sang with joy when I discovered artisan café Bean & Hop. Their coffee is incredible, and their flat white reminds me so much of home. What’s more, as its name suggests, the Bean & Hop also serves up great craft beer. It’s a double win, really. 424-426 Garratt Lane, SW18. More here.

We Australians – along with our antipodean neighbours in New Zealand – may be responsible for bringing the flat white craze over to London, but it’s arguable we also helped improve the standards of what makes a great brunch. Ben’s Canteen is a fine example of this. Its Aussie-inspired menu is to die for, complete with smashed avo (another Aussie import), fried chicken benedict, burgers, and cocktails. You often have to book well in advance if you’re going with a group of three or more. 422 Garratt Lane, SW18. More here.

London’s theatre scene is world-famous, but it’s not confined to the West End. Earlsfield’s Tara Theatre is unique in that it specialises in progressive, cross-cultural productions. It has staged pantomimes from a Bollywood twist to Jack and the Beanstalk, to hard-hitting stories of young British Muslims navigating their intersectional identities. Tickets are far more affordable than its West End cousins, too. 356 Garratt Lane, SW18. More here.

Pubs: The Jolly Gardeners and more

Some of its neighbours may receive all the praise for their vast range of drinking dens, but Earlsfield is blessed with several pubs that operate under the radar and all within easy walking distance. For fantastic grub, my tip would be The Jolly Gardeners, whose kitchen is run by Masterchef winner Dhruv Baker.

Just a few blocks down is The Wandle, one of those places that you don’t think much of before going there, but with live music every Friday and Saturday nights, it often ends up being an unexpected and fun night out. Diagonally across the road is The Earlsfield, a slick all-in-one bar and restaurant built beneath the railway arches of Earlsfield station.

For a more contemporary-style boozer, The Halfway House across the road from the train station is the place to be. Further down Garrett Lane, there’s The Leather Bottle – a historic watering holes that’s been serving beers to locals for over 300 years. In my opinion, it has south London’s best outdoor courtyard too, and its large size reminds me of the beer gardens of some of my favourite pubs in Sydney.

Where do I start with the Double Bubble Café? I walk past it on a daily basis and always felt as if it were a local institution of sorts. Its bright green signage and interiors left unchanged since goodness knows when, Double Bubble is one of those charming, traditional caffs facing the threat of extinction from London’s high streets.

After seeing a random and glowing blog review, I figured I had to give it a whirl – and I’m so glad I did. Its owners were super friendly and accommodating, having run the café for more than two decades. But the jewel in the crown here is the food – it’s nothing fancy, but it’s homely and fantastic. Also, how often can you find a place in London that serves a full English Breakfast for a fiver? You get way more out of a meal here than you would for a similar price at Caffè Nero or Carluccio’s, both of which are across the road. 408 Garratt Lane, SW18