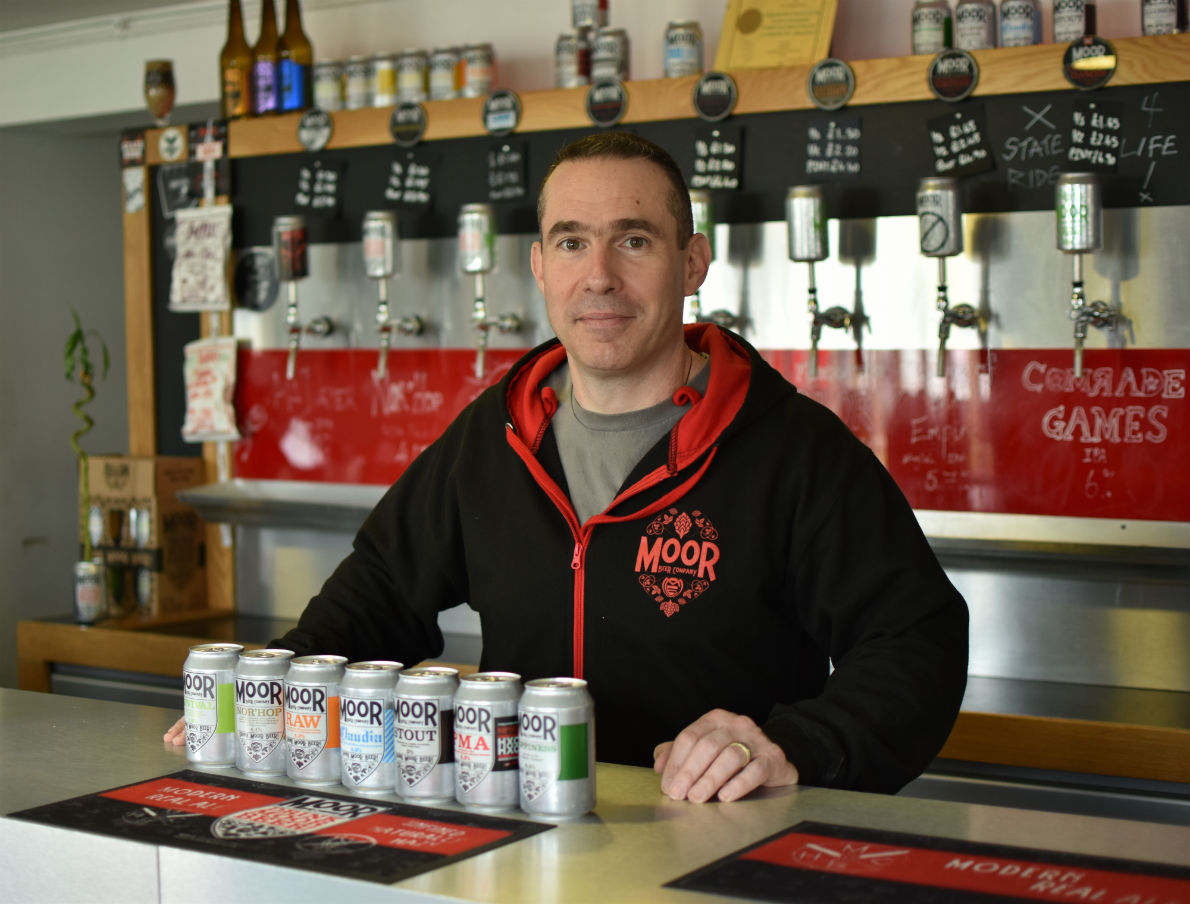 Inside Bermondsey’s Moor Beer – and three you must try

y Dad brought me up on drinking,” quips Justin Hawke, owner of Moor Beer. “He taught me to appreciate alcohol responsibly; my passion for booze has longstanding roots.”

Justin started home brewing in California during the IPA explosion of the 90s. “I always wanted to get over to Europe to do it,” he says. “I lived in Germany for a couple of years, but ultimately I wanted to come to England.” Why Blighty? “I love the pubs, the history and the way of life.” says Justin.

Rewind to 2007: with two careers behind him as an Army officer and business consultant, he bought the then defunct Moor Brewery. Over a decade later, the Bristol-based company is thriving, and they’ve recently opened an outpost south of the river in Bermondsey.

“We were really struggling to service the London market,” says Justin. “It’s an area that you can’t really ignore. Running up and down with a van didn’t make any sense. Initially we were thinking about a small depot, and then that morphed into creating a taproom alongside it to help fund costs.”

The hunt for a premises began. “Of course, where better than Bermondsey?” says Justin. The stretch known as the ‘beer mile’ is home to the likes of Fourpure, Brew by Numbers, Eebria and Partizan.

The team opened their doors at the end of March. As well as selling to the public, they’re using the space out the back for projects. “We’re going to be doing a combo of sours and spirit barrel-aged beers,” says Justin. “They take months to mature. My hope is that the first will be ready just before Christmas.”

The unrefined and naturally conditioned range is over 20-strong. “They’re all my recipes,” says Justin, “they each have a different time and place.” Among them are English IPA Return of the Empire and coffee stout Dark Alliance. “Outside of beer, music and Star Wars are my two passions,” says Justin. A newly developed offering is cleverly named Solo – a ‘smash’ (single malt and single hop) pale ale that came out in time for the latest film.

“We’ll be doing a lot of events, things we like to have fun with,” says Justin. “We’re friends with a lot of brewers around the world; we’ve got an Italian brand coming to showcase their products in June. The plan is to build on programmes like that.”

What’s their bestseller? “Hands down, Nor’hop,” says Justin. “It’s a 4.1% golden ale, rated as best in the world in its class. It set the benchmark for what everyone tries to make. Ours is still unique and the top one out there.” They brew three variants of it, each using hops from a different part of the globe (So’hop, Italia’hop and Union’hop – see what they did there?).

In total the operation has 20 employees. “We’re still family-owned,” says Justin. “There was no crowdfunding, we don’t have any investors, it’s all completely our own money. We keep ploughing the profits back in.” He believes it’s a more ethical and sustainable way to build an enterprise.

We visit Bermondsey one showery Saturday afternoon. The simply decked out taproom sits in one of the disused railway arches and is packed full of cheery drinkers. A bar runs along the back wall, wooden tables and benches dot the place. As the rain eases people spill out onto the street and the music gets turned up a notch.

Order a half, two-thirds or a pint, and if you’re feeling peckish snack on pitta chips (go for the chilli and garlic), courtesy of Soffle’s. Here are three we sampled.

Light at 3.8%, this bitter is made using a fruity, clean yeast. Manager James calls it a modern classic. Hoppy (a blend of American varieties) and refreshing, it’s in no way traditional and a pleasant surprise.

A hazy pour, this 4.5% wheat ale slips down easily. There’s an aroma of banana and spice, with flavours of citrus and tangerine and hoppy notes. Cloudy and creamy, it’s a top-seller.

Return of the Empire

Using British hops called Jester, this English IPA is powerful at 5.7% and golden in colour. With moderate bitterness, it has hints of peach, pine and mango. Popular with customers (including my partner).