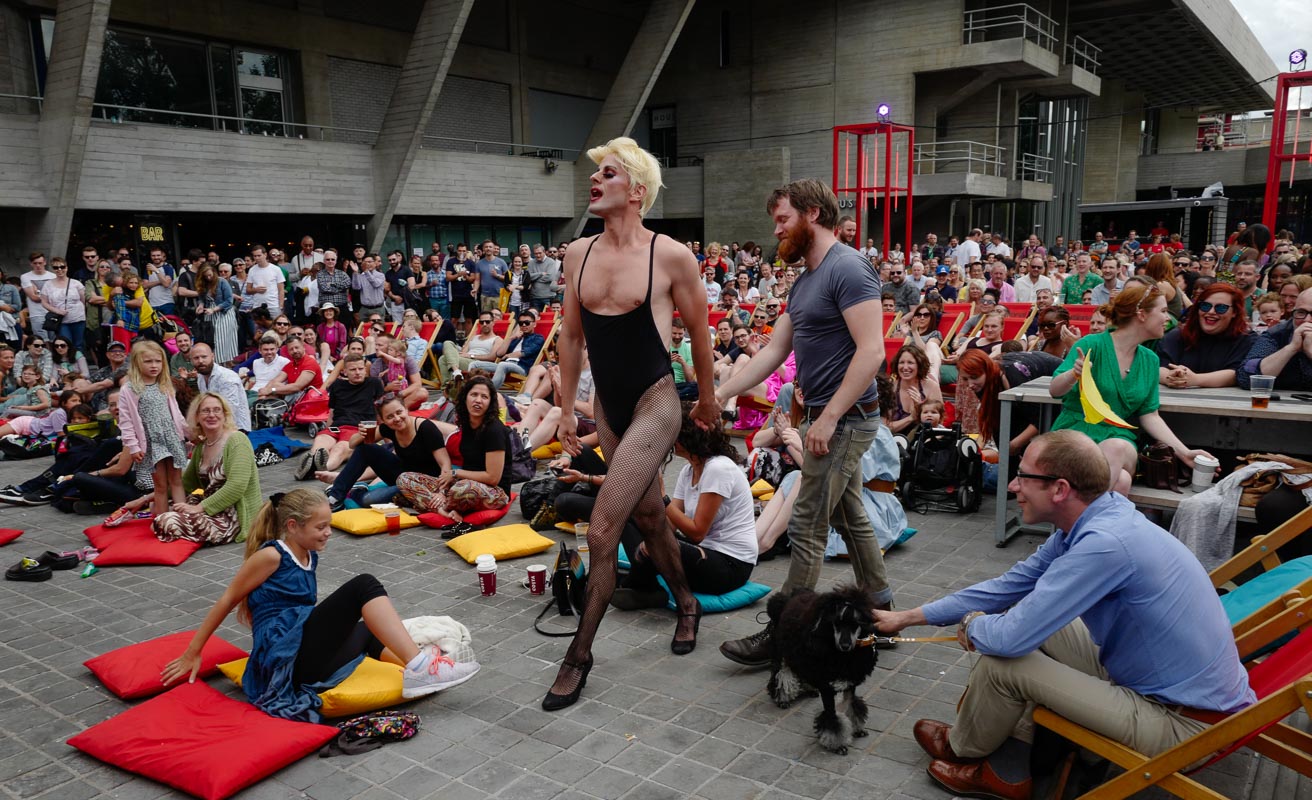 Returning for the fourth year, this South Bank whopper ushers in five weekends of open-air entertainment - for nada

nother outdoor festie is hitting SE1 this summer, and just like The Scoop, you can catch all manner of arty happenings for zero cash.

Put together by the National Theatre and a quintet of the UK’s leading arts and culture organisations, it all starts on 13th July and will be held directly outside on the river-facing boulevard.

What can we expect? East London boozer and queer performance mecca The Glory will, um, open things for the third year running: co-owner and drag queen Jonny Woo and a dazzling army of performers are set to create their usual inimitable production, with Madonna-themed cabaret, the insanely talented Virgin Xtravaganza and a re-creation of the pub’s legendary piano-bar show (you know the score, sing-a-longs to Whitney, Britney, Erasure, Bowie and Madge).

And the night all culminates in Woo’s new show with double Olivier award winner Le Gateau Chocolat, a back catalogue of musicals, with ballsy ballads, captivating duets and slaughtered show tunes currently playing at Soho Theatre.

What else? The second weekend will see Home Manchester hit the stage, with a diverse mix of performers and musicians including sequin-clad satirical act Bourgeois & Maurice and Madchester DJ Dave Haslam. Missed Haçienda Classical at Kenwood House? Saturday evening will see DJ Paulette on the decks pumping out acid house and rave tunes.

Making its debut this year, Sadler’s Wells is up on the 27th July, with hip hop, ballroom, traditional Indian kathak, contemporary and flamenco. Plus yoga and a family-friendly workshop.

Another first appearance will come from Nonclassical – they’ll bring together the best in new classical, electronic and experimental music, with live techno from Klavikon, cello trio Tre Voci and their live improvisations and jazz vibraphone from Cecilia Bignall.

If you’re of the hungry/thirsty variety, of course there’s all manner of street food and craft beer, from wood-fired pizza to gelato.

See you waterside for an undignified early-doors scramble for the best deckchairs.

River Stage runs from 13th July to 12th August and all events are free. For info here.