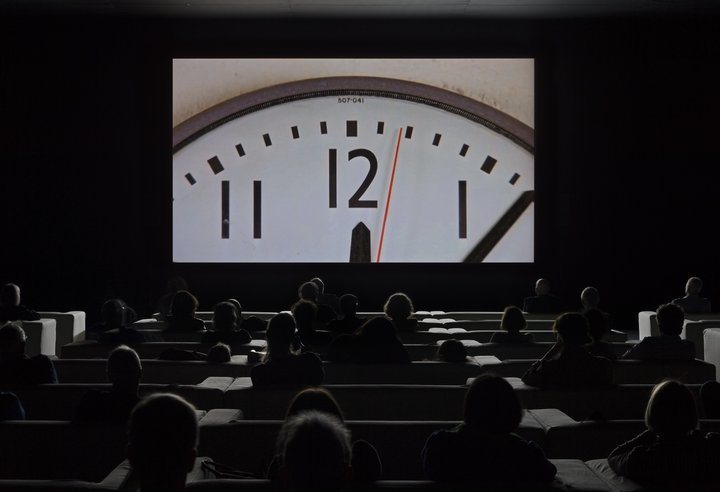 Never has time slipped by so quickly – whilst being aware of every precise minute.

That was my initial thought after witnessing a breezy 90-minute portion of Christian Marclay’s internationally celebrated 24-hour video installation The Clock last weekend. And the cliché is true: it really did fly by.

This rollercoaster-style montage of thousands of film and telly clips that depict clocks or other time-pieces plays out in real time, rather than its cinematic equivalent. Which means that the hour and minute shown on the screen corresponds exactly with that on your wristwatch (or iPhone). Simple and yet so incredibly clever.

It’s been captivating audiences across the world since its debut at White Cube in 2010 (and subsequent Golden Lion Award at the Venice Biennale in 2011); but after touring internationally, this is the first time Tate has shown The Clock since it joined its collection.

What’s the backstory? Well, following years of research and production in deepest Clerkenwell, Marclay – a Californian who has admitted he’s no cinephile – edited the thousands of excerpts to create what really is an immersive visual and sonic experience.

Its thematic sections and careful juxtaposition of music – the soundtrack is as important as what’s on the screen – create a continuity that proves so addictive: just five more minutes, you’ll be saying in your head.

My favourite section was the nail-biting exciting 1145am Big Ben sequence, while midday is announced as spectacularly as you’d expect (midnight will undoubtedly be a corker, too).

And the clips span both well-known and obscure films, including thrillers, westerns and science fiction, so there’s a whirlwind of narratives, settings and moods, all within the space of a few minutes.

The Clock has of course been packing ’em in at Tate Modern’s new bit (otherwise known as the Blavatnik Building) since September – but this weekend sees the final all-night screening of the full 24-hour work.

In fact, it’s so popular that the waiting times are lengthy. We arrived at 1030 sharp on Sunday morning last weekend, had a spot of trouble finding it and raced in (the auditorium is about the same size as a large Everyman cinema) to nab the last two seats.

By the time we left, the room was heaving with both seated and standing punters, and the queue snaked right out, a couple of hundred strong. As viewers can stay and watch as long as they want, there’s no telling how long the wait will be. So get there early.

And a word of warning: if nature calls, it’s straight to the back of the queue. And yet that may, in fact, teach you something further about time.

This is box title
The gallery stays open overnight for one last time this weekend 12th/13th January to allow the 24-hour film to be experienced in full. The installation ends on 20th Jan. Free, more info at the Tate Modern website: here