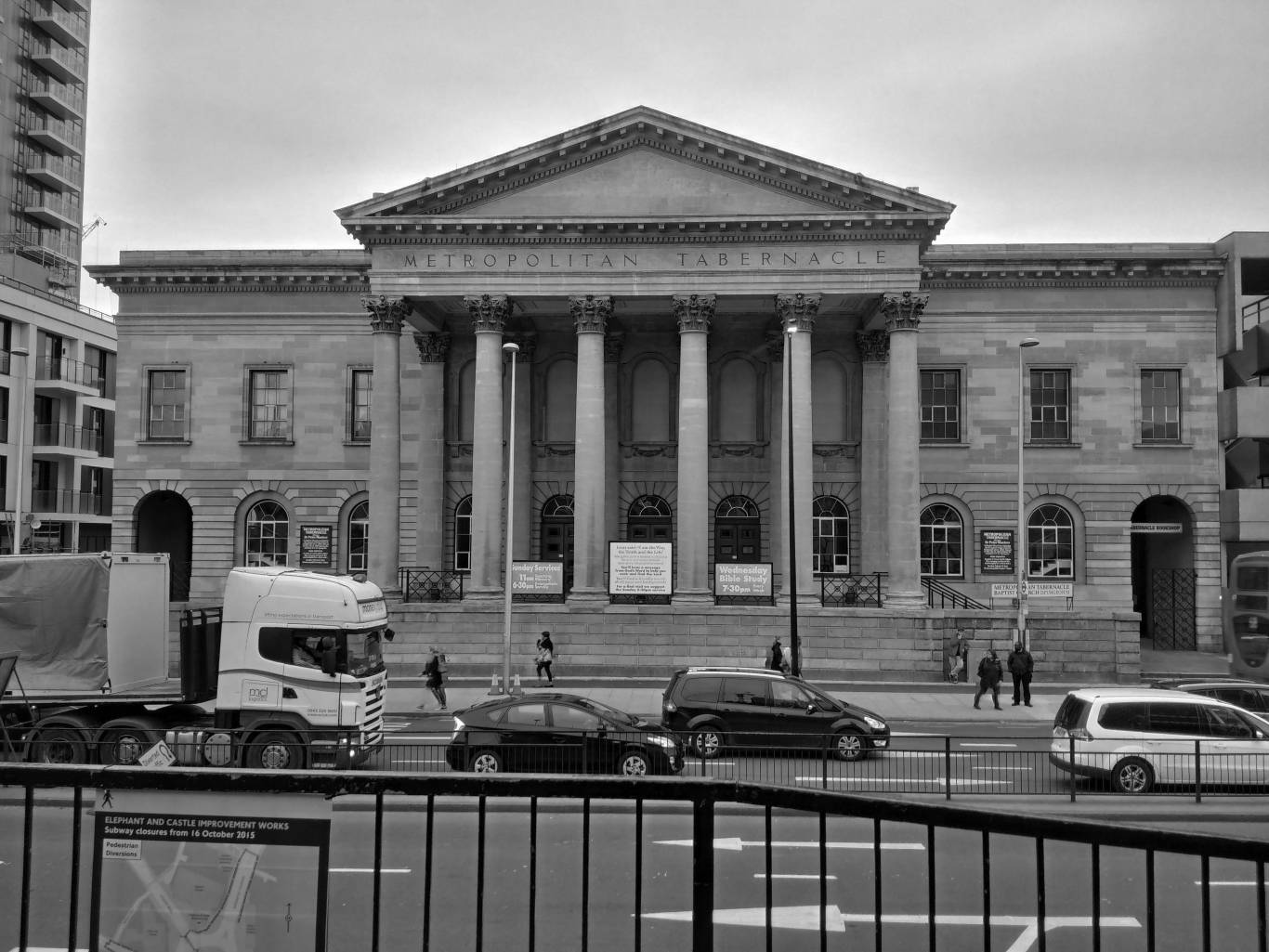 When I saw The Fall play at The Coronet – a venue which exists as the cracked plastic egg at the centre of the Elephant lucky bag – lead singer Mark E. Smith walked on stage saying: ‘Say goodbye to architecture’.

You can see what he means. Smaller businesses have been pushed to the outskirts of the Tesco’s which dominates the area like the lodestone at the centre of the toad’s forehead. Parallax is pushed towards expressionism: your eye drifts from an outdoor stall selling rugs, out across the road to the Metropolitan Tabernacle – built in the Greek style – where ‘The Boy Preacher’ Charles Haddon Spurgeon held audiences in their tens of thousands captive for hours.

I walk past an abandoned bike, with no wheels, which has been locked to a rail. Yellow crosses have been painted onto a brick wall. An electricity box at foot level has had its cover removed. Neon flashing above closed shops. Tags from squatter graffiti-artists: ‎BETTER SQUAT THAN LET HOMES ROT. London’s sprawling language banquet is reduced to a stock here: noodle bars and buffet restaurants.

The always present builders – the luminescent men – walk the artificial bombsite they’ve constructed: transient overlords. At least until the contract is delivered on.

London developments are endless. Projects are underfunded, forgotten, then re-imagined in a different form by graduate planners. In front of me now I can see that the three lane roundabout has been downscaled to just two – cones signal the fact in red and yellow swirls. For once, the late night commuters and the drivers agree: they all want to kill each other. Stress becomes a universal language. The Heygate Estate – once home to 3,000 people – is no more; demolished, it remains under wraps: detritus to the wind. The bin bags above the remains are held down by car tyres which appear like rubber rings in a pool of tarmac. Alongside the tube a new build towers between two off-gold columns. The old Elephant & Castle pub has long closed down too, its faux-Rococo lettering is peeling away, serif-by-serif. The single syllable PHANT remains, as if longing for a lost OM to complete it.

The Metropolitan Tabernacle is now a baptist church. Along the hidden course of the Neckinger water is offered as the source of renewal. Dunk, start again. Alongside it, a man in a forklift sweeps grey clay over some ornate tubes, newly laid, and the vinyl in the window behind reads: The Future Generations of the Creative Industries. We can’t forget the source that we’re above – the river that’s brought us here.

And rivers, like roundabouts, can bring you back to where you started. With the tunnels now gone the walker is diverted through the dug-up earth towards the only remaining memory of the last five decades: The Michael Faraday Memorial. The diamond in the toolbox. A stainless steel hard drive, facing all four directions at once. A compacted skyscraper. Inside is an electrical substation for the Northern and Bakerloo lines. It was built by artist Rodney Gordon and has been here since 1961, invacuating all white noise into its cubic force field. At night it flicks to neon: a disco theme with a spectrum of colours twisting behind its hologrammatic windshields.

Each square incarcerates a headlight. This is a true memorial: Faraday as the young local apprentice who came from nowhere to put his name on the map. Like Chaplin before him. The memorial seems to invite its own erasure but is so rooted in the psyche of London as to be immovable. Just like Elephant & Castle itself.

This is box title
Extracted from Real South Bank by Chris McCabe, available from Seren Books (£9.99)